Find the locus of the orthocenter of $\triangle PAB$.

All this consumes a lot of time, and even then, I failed to solve it. Is there a short and efficient way of solving this problem?

Source - This problem appeared in our test, and I was not able to solve it.

At first I missed the “on a line” part of your question, and assumed that $P$ would be on a circle of radius $3$ around the center of the stated circle. The computation below originally refers to that.

This problem has perfect rotational symmetry: you have that circle of radius $1$ and another of radius $3$ and $P$ can be at any position on the latter. That position alone determines $A$, $B$ and the orthocenter. So if you rotate $P$ around the center, the orthocenter will rotate as well. Which means that the orthocenter has to be yet another concentric circle.

Now all that remains is finding its radius. For that we'll use coordinates. Assuming the origin as the center of all circles, choose $P=(3,0)$. Then its polar line, which passes through the touching points of the tangents, will be $x=\frac13$ which intersects the circle in two points: 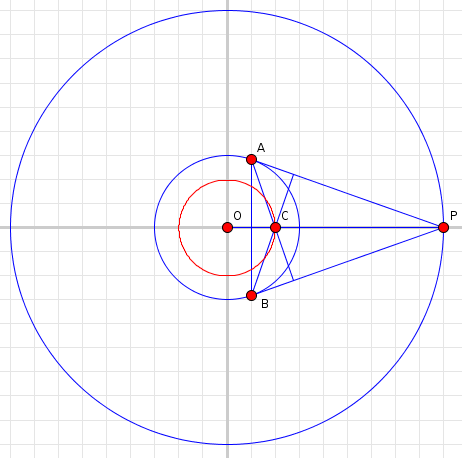 Then Mick's comment made me aware of my mistake.

$P$ is on a line and that line is at distance $3$ to the center of the circle. Of course, the situation used in the computation above will still remain a valid instance of this, if I choose the line to be the one at $x=3$. So we still know one point on the locus, but that locus won't be a concentric circle any more.

Doing a quick experiment with Cinderella, I found the locus to be a circle through the origin. 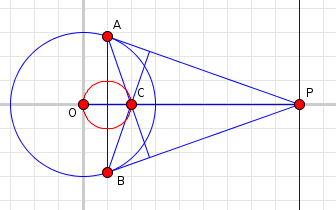 This is numerical evidence, but no proof. If you can show that the curve has to be a circle through the origin, then you can easily describe that circle using the point I computed above. Until then, this answer is incomplete.

So you can do the same computation as above, this time assuming a variable parameter as one coordinate. Starting with $P=(3,a)$ you obtain $AB:3x+ay=1$. Intersecting that with the unit circle, you have to solve a quadratic equation. To shorten things, I'll use another letter for one such solution, namely $b=\sqrt{a^2+8}$. Using that you can describe the points of intersection as

which is a point on the circle

I wouldn't want to do the above computations without the help of a computer algebra system, though. 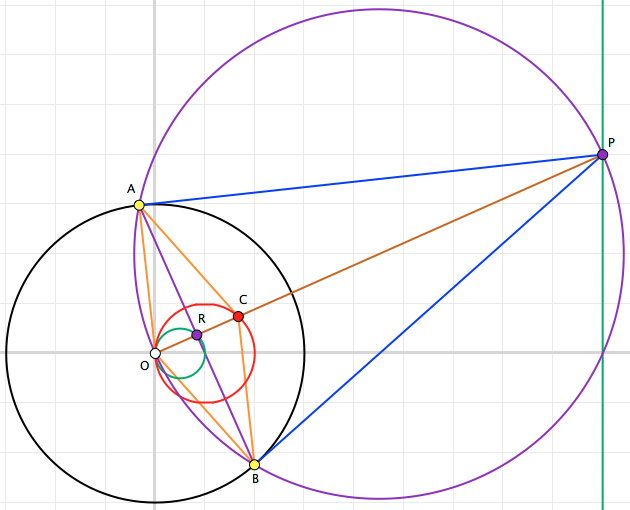 Brute force computation is the approach to use if you have a computer and don't want to think. But we can do better than this. Observe how a tangent is orthogonal to the radius at the touching point. So in the labels of my figure above, $AOBC$ will be a rhombus. If we want to show that the locus you are searching for is a circle of diameter $\frac23$ through the origin, you may as well demonstrate that the center of that rhombus $R$ lies on a circle of diameter $\frac13$, since the diagonals of a rhombus bisect one another.

Now consider inversions in the unit circle. These will leave $A$ and $B$ fixed. The line $OP$ will remain fixed as well. The line $AB$ can be considered a circle through $A,B$ and $\infty$, the point at infinity. Circle inversion will map that point at infinity to the circle center, so the image of the line $AB$ will be a circle through $O,A,B$. Since $AOBP$ is a cyclic quadrilateral, $P$ lies on that circle as well. The center of the rhombus $R$ is the intersection of the line $AB$ with the line $OP$. Therefore its inverse in the circle is the intersection of $\bigcirc ABP$ with $OP$, which is the point $P$. Therefore the locus of $R$ is the inverse of the locus of $P$, i.e. the inverse of the line. Since a line is a circle through $\infty$, its inverse is a circle through the midpoint. And since the point closest to the circle has distance $3$, its image at distance $\frac13$ has maximal distance from $O$, therefore the locus of $R$ has diameter $\frac13$ as we had to demonstrate.

3
Two circles touch internally
2
From any arbitrary point $P$ on $y =\cos x$ tangents $PA$ and $PB$ are drawn to a circle which passes through
0
Circles and tangents and circumcircles
1
Locus of vertex given base and ratio of other two sides
1
Complex number - locus of a point
5
Tangents of two circles, a problem in Jules Verne book
0
circumcircle of point of contact of tangent to a circle
0
How to find the locus of$ P$?
1
An Olympiad geometry question; Angle chase, Orthocenter, Bash, Circles.