I've been trying for a while to develop an algorithm that counts the maximum number of disjoint vertex paths in a graph, but with an addition of "forced paths". Forced paths are here marked with bold lines. Paths that enter a vertex with a forced path is forced to enter it and flow along.

I've omitted the adaption for running max flow on vertex disjoint graphs. The graph is undirected and all edges have flow=1. 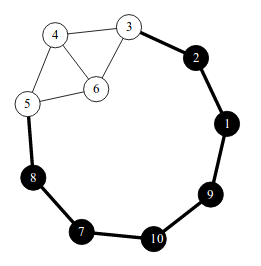 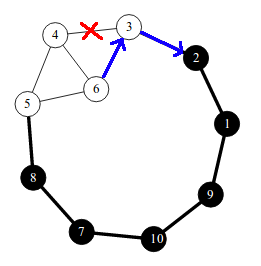 Can anybody point me in the right direction? Could I modify Ford Fulkeson, or maybe use another max flow algorithm to account for the forced paths?

One way you could solve this is by modifying the graph instead - each forced path can be replaced by a single edge that has the minimum capacity of all the edges in the original forced path (which is always 1 in this case). So any graph with forced paths reduces down to a graph without forced paths.

You can transform the graph by taking each pair of endpoints of a forced path.

By now it might be clear that if you run Ford-Fulkerson on the transformed graph that it will find the max flow which obeys the constraints you laid out. If not you can ask me to clarify.

I respond to your comment in another answer because all this can’t fit in a comment, but it’s just a clarification.

To start I was left with the impression that you’re asking about an undirected graph where forced paths are bidirectional.

Even so, when the graph is directed, of course assuming that all forced paths don’t overlap and all edges along a forced path point in the same direction, my proposed solution can be slightly modified to work. The modification is that all ingoing edges to one endpoint of a forced path will be redirected towards the other endpoint of the path only if the path is in that direction.

Also a note when a flow has to start from a vertex u which is an endpoint of a path will start instead from the other endpoint of the path v if the forced path points from u to v.

Not the answer you're looking for? Browse other questions tagged graph-theory optimization network-flow or ask your own question.

2
Max flow in a flow network such that $e \in E$ has the maximum flow it can have.
15
Finding the max flow of an undirected graph with Ford-Fulkerson
2
Given a max flow on a graph, how do you determine the actual edges that belong to the minimal cut?
0
Longest path in undirected graph
2
Residual Graph (Max - Flow) - Intuition and correctness
0
Max flow in simple weighted graph with no specified source or sink