What does this "double less than or equals to" sign mean?

I found this in a Computer Science pseudocode context (see page 4 of this paper).

It means exactly the same as $\le$.

I add a comment for the sake of completeness. As said, in general $\geqq$ means $\geq$, but in some old math texts it is possible to find the following distinction for a real vector $x$:

Mathematical notation is far from set in stone or standardised, as might appear to a beginner. Here's a sample of the variations in the inequality signs (taken from symbols-a4.pdf): 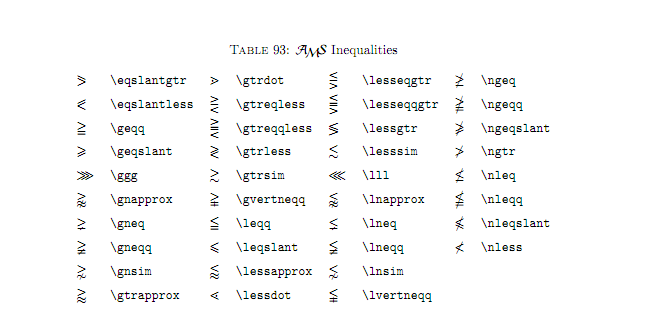 Of course, most of this is not commonly used; my guess is that they have been included only for historical purposes and for completeness.

In the given context, it means “less than or equal to,” just as “≤” means. However, it is coded as a separate character (not just a glyph variant), so it could be used for some other meaning. A symbol means whatever people make it mean.

Historically, it is a glyph variant, and it has been encoded as a character primarily for compatibility reasons, see Unicode Standard, pages 491–492.

Not the answer you're looking for? Browse other questions tagged inequality notation computer-science or ask your own question.

-1
Is There a Greater Than and Not Equal to sign?