Why do we stop at exponentiation stage in arithmetic of natural numbers?

The point is that maybe there are rich interactions between these new natural operators and the ordinary arithmetic operators of natural numbers. These interactions may unfold some deep aspects of long standing open questions of number theory which hopefully can lead us to a solution itself.

Question: Why do we stop at exponentiation stage in arithmetic of natural numbers? Is there any mathematical or philosophical problem about defining such generalized operators and working with them as well as successor, sum, multiplication and exponentiation? Are these "unnatural" in any sense? If yes, what does this "unnatural" essence mean? Did these extended set of operators on natural numbers appeared in any text before? If yes, please introduce your references.

Why do we stop at the exponentiation stage in the arithmetic of natural numbers?

We don't actually stop there. Knuth's up-arrow notation generalizes the operations up to any level you want and Conway's chained arrow notation even further. Note though that all these generalizations are applicable only for $n\in\mathbb{N}$.

Inability to generalize and hence stop at exponentiation, is a problem only when you try to extend the nomenclature to include definitions for REAL $n$. That's an entirely different problem and opens a rather big can of worms. See tetration on Wiki for details.

Others have done a good job of explaining how exponentiation can be generalized. I'm going to address the question of why mathematicians are not interested in these generalizations.

I think the main reason why Knuth's up arrow has not taken off in the same way that, say, exponentiation has is that some of the very nice properties enjoyed by addition and multiplication start to break down upon further iteration. Some of these nice properties are

Mathematicians have found it very fruitful to abstract out these properties and study other "number systems" that obey these rules, in addition to a few others. This train of thought leads to commutative algebra and the study of commutative rings, among other fertile branches of mathematics. We therefore have a good "moral" reason to be interested in binary operations that satisfy some subset of the five properties above: there's a lot to say about them.

I don't want to suggest that mathematicians never study objects that don't have "nice" behavior -- there are many counterexamples to such a claim. But we only tend to study badly behaved objects when there is some clear use for them, and Knuth's up arrow doesn't seem to be much more than a good way for talking about really large numbers.

Sure, large numbers do appear moderately often, if you look up the research literature in Combinatorics. The examples I can think of are the Knuth's Up-Arrow Notation, Conway Chained-Arrow Notation, Hyperoperators, Tetration, Cutler's Bar Notation, Steinhaus-Moser Notation.

A good starting point for entry into the study of such operators would be this article on Wikipedia : Knuth's Up-Arrow Notation

You could also read Lore of Large Numbers published by American Mathematical Society.

Every recursive function (and much more) is definable in the (first-order) structure $(\mathbb{N}, +, \times)$ but not in $(\mathbb{N}, S, +)$. This is due to Godel. To appreciate why this theorem is non-trivial try finding a formula $\phi(x, y, z)$ in the language of arithmetic that expresses $x^y = z$.

As others pointed out, we don't stop at exponentiation. We do stop at it in primary, secondary, and early post-secondary school though. Which I think is why your question arises.

In another question I gave an answer which even discusses such operations in fractional order. This might be interesting as a side-view. See here

But I also copied a short citation of an article of A Bennet, where he gives one argument why we actually do not increase the order of operations beyond exponentiation - except for research on very special numbertheoretic properties. I paste it to this answer too. 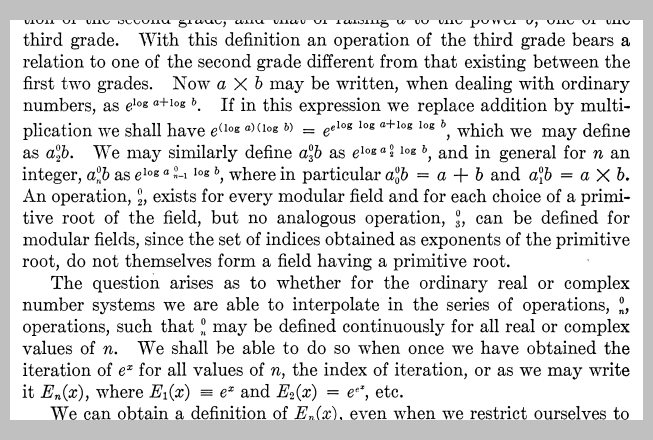 99
Help me put these enormous numbers in order: googol, googol-plex-bang, googol-stack and so on
27
Continuum between addition, multiplication and exponentiation?
5
Where can I learn more about commutative hyperoperations?
1
A pre-successor hyperoperation: subplus

73
Why are addition and multiplication commutative, but not exponentiation?
1
Arithmetic sequence of natural numbers
13
Are there non-equivalent cardinal arithmetics?
16
Ordinal tetration: The issue of ${}^{\epsilon_0}\omega$
1
Thinking about a uniform probability distribution over the natural numbers
0
Formal or informal definability of the standard model of natural numbers