I am interested in Math movies which inspire and motivate. I know about A Beautiful Mind, Good Will Hunting, and Pi. Are there any others someone can suggest?

"Stand and Deliver" is about a math teacher who teaches Advanced Placement Calculus to inner city children.

Twentyone, en.wikipedia.org/wiki/21_(2008_film), is about a professor and students who use mathematics and planning to win money in Las Vega.

Comment j'ai détesté les maths (How I came to hate maths), elected in France as the best 2014 documentary film. I really enjoyed it. You can see the trailer (with English subtitles) here.

A movie that I haven't seen yet: The Imitation Game, about Alan Turing's life.

See also the Wikipedia page on Films about mathematicians.

I saw 'Donald Duck in Mathemagic Land' many years ago, and I still remember it very fondly. I recommend it highly!

And it is suitable for all ages!

Take a look at Hard Problems. It follows the extremely gifted students who represented the United States in 2006 at the world's toughest math competition—the International Mathematical Olympiad (IMO).

You can probably find the entire movie on Youtube.

Numb3rs (stylized NUMB3RS) is an American crime drama television series that ran on CBS from January 23, 2005, to March 12, 2010. The series was created by Nicolas Falacci and Cheryl Heuton, and follows FBI Special Agent Don Eppes (Rob Morrow) and his brother Charlie Eppes (David Krumholtz) who helps Don solve crimes for the FBI.

Try Flatland: The movie. Its about a square who discovers that there are more than 2 dimensions.

It may not be your traditional math movie, but the original (NOT THE REMAKE!) of Cheaper by the Dozen is a well done adaptation of the book about an efficiency expert, and that entire process is highly mathematical/pattern recognition/problem solving. It inspired me as a child to think in such fashions.

"The Professor and his Beloved Equation" is a Japanese movie by Takashi Koizumi about the life of a number theorist and the joy of being a mathematician.

Also "An Invisible Sign" could be interesting for you. It is about a math teacher and the role of numbers in her life.

Traveling salesman was a pleasant surprise for me.

It's about group of mathematicians who prove P=NP.

First thing that comes to mind when I hear the question is October Sky. It's the (slightly dramatized) true story of Homer Hickam and his friends "the Rocket Boys." They lived in a podunk coal-mining town in West Virginia when Sputnik went up, and when Homer (a high school student at the time) saw the satellite moving across the sky, he was inspired to learn about rocketry. He and his friends started building little DIY rockets out of steel pipes, at first with almost disastrous results (no one got hurt by their early homemade pipe bombs, but someone could have!) and later with greater and greater success as they learned and refined their techniques. Homer eventually became a bona fide rocket scientist for NASA.

I'd recommend the movie, and the book it was based on even more so, the actual memoirs of Homer Hickam. The movie did a good job of staying true to the source material, but it made one really ugly change: stripping away all of the father's redeeming qualities to turn him into a source of dramatic conflict. A lot of the engineering help that the movie attributes to the teacher and the nerdy friend actually came from Homer's father, who, being a mining foreman, had to know a few things about engineering and physics in order to run the mine and keep his workers safe!

But anyway, it's a true story and it's the sort of story that can inspire kids to learn about math and engineering, exactly the sort of thing you're looking for.

Moneyball (2011) - Based on the true story of how the Oakland A's manager, Billy Bean, used a statistical approach to finding undervalued players, ultimately allowing him to create a competitive team with a fraction of the budget of teams like the Yankees.

It must be said, Stand and Deliver is a great mathematics movie - truly inspirational. I'm not sure about this, but perhaps the film based on Alan Turing, famous cryptographer - The Imitation Game?

An Invisible Sign is also a fairly interesting film.

I suggest looking at Wikipedia's list of movies on mathematicians.

(If you play poker you will like it very much)

Although not a movie regarding mathematics, I think Limitless by Bradley Cooper and Robert De Niro could be a good motivator movie. The movie is quite fascinating and entertaining. Just don't get lost in some of the fantasies they throw your way.

Fermat's Rooms is a good one .They talk about Goldbach Conjecture in beginning ..Four mathematicians who do not know each other are invited by a mysterious host on the pretext of resolving a great enigma. The room in which they find themselves turns out to be a shrinking room that will crush them if they do not discover in time what connects them all and why someone might wish to murder them.

I would like to suggest "The Number $23$" starring Jim Carrey. It's not at all about math. It's about the 23 enigma which is only as relevant to mathematics as superstitions surrounding $7, 11$ or $13$. But it's the first time Jim has done a non-comedic role and it's worth a watch. 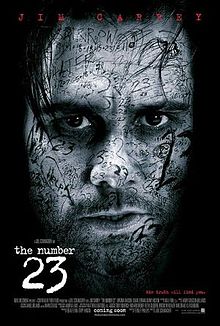 But to defend myself: $23$ is a number and numbers are dealt under math. See the Wikipedia page for $23$.

Some of my favorite facts are:

Not the answer you're looking for? Browse other questions tagged reference-request big-list or ask your own question.