When two functions are equal, but not.

I haven't looked into it much, but this is something I've been aware of that I know I need to look into.

The qualities of the function are not preserved after the algebraic manipulation, so I can't strictly say that $\frac{x+1}{x+1}=1$.

This is an issue for me when understanding integrals. For instance, finding the definite integral of the quotient, if the discontinuity is within my limits, doesn't make sense. But after changing the quotient to a constant, it's possible: but I've found the area under a curve that wasn't complete. I've found a solution for an unanswerable, insensible question.

I hope I've made this clear. My question is, is this right? How do I come to terms with this?

If you fail to specify all three of these things, you give an incomplete specification of the function.

So when you say $$f(x) = {x + 1\over x + 1},$$ you are omitting the intended domain. The natural domain is the set of all real numbers save for $-1$. This is the tacit domain often used in discussing real functions of a a real variable.

The constant function $x\mapsto 1$ defined on the whole real line is an extension of $f$ to the entire line. This is a different function, since its domain is larger than that of $f$.

$x=-1$ is what's called a removable singularity of your function $f$: if you redefine your function at that point it becomes continuous.

As for integration, the definition of the Riemann integral does require the function to be defined everywhere in the interval in question. However, for a function which is undefined at some point you could consider an improper integral, which would converge to the correct value. When you get to Lebesgue integration, having the function undefined at some point is allowed, and won't make a difference. 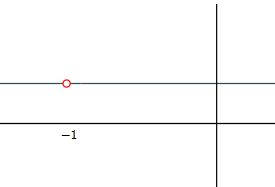 Things can be made nice, though: You could redefine $f$ to take the value $1$ at $x=-1$. This would give you a new function $\tilde f$ that differs from $f$ at only one point. Also, $\tilde f$ is identically 1; and so, it can be integrated over any interval of finite length.

You should probably think of $\frac{x+1}{x+1}$ as having a singularity - or at least some kind of blip - at x = -1. This is the honest answer - we cannot get away from the fact that crudely plugging x = -1 into that expression gives 0/0. But sort of "morally" it's not too hard to skip over this singularity, for the obvious reasons: it is a very small singularity (a single point) and we can fill it in in a natural way that makes the function continuous there. A singularity of this form is called "removable", and we tend to identify the two functions even if this isn't strictly true. There are other types of singularities that are harder (or impossible) to remove: poles and essential singularities, for example. You might want to look these up - they will be mentioned in detail in a book on complex analysis.

Assume your $f(x)$ is discontinuous in $x_0$ but continuously extends to the whole real line; then let $\bar{f}(x)$ its unique extension.

There is no discontinuity at x=−1, just take the right and left limits and you'll see that. Hence f = 1.

Not the answer you're looking for? Browse other questions tagged calculus integration limits .

5
Find the number $b$ such that the line $y = b$ divides the region bounded by the curves $y = x^2$ and $y = 4$ into two regions with equal area.
0
Prove that these two formulas to calculate the angle between two 2D lines are equivalent
2
Calculate $\lim \limits_{x \to \infty} x\int_{0}^{x}e^{t^2-x^2}dt$
0
How to treat $\Delta$t in instantaneous velocity equations?
6
Show that limit does not exist (two variables)
2
Epsilon-Delta definition of a negative infinite limit as x approaches infinity
0
Inverse functions when one is given functions $f(x)$ but then integrating with respect to $y$