What would be the name of the shape that is the set of all points such that they are equidistant from the point $(0,1)$ and to the parabola $y=x^2$. 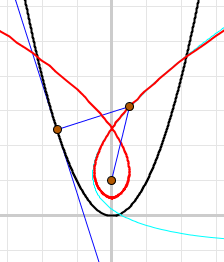 Here is a desmos graph that generates the points. It is basically using the same process that creates a parabola with a focus and a directrix but this directrix is a parabola rather than a line

Given a point $P$, if $Q$ is the nearest point on the parabola to $Q$, then $P$ lies on the normal through $Q$. Unfortunately, the converse is not the case: depending on its position, $P$ may lie on up to four different normals, and usually only one of these leads to the closest point.

For instance, in your diagram, the point on the red curve is actually closer to the right-hand arm of the parabola than the left-hand arm, so its distance to the parabola is less than is shown in the diagram.

Having said that, we can find the equation of the red curve as follows:

Equate the $x-$ and $y-$coefficients to find the point of intersection:

Substituting this value for $\mu$ in the point on the perpendicular bisector gives a parametric form for the red curve:

This passes the Wolfram Alpha eyeball test, which means it's possible that I haven't made any errors. But even if that's the case, the curve probably has a simpler form. (On the other hand, it looks suspiciously as if the curve is not differentiable at $(0,\frac12)$, so perhaps a complicated equation is inevitable.)

Edited to add: Oh $-$ I see now that you wanted the name of the curve, not its equation. That I don't know.

I am pretty sure this is called a "right strophoid". Seems pretty similar.

Not the answer you're looking for? Browse other questions tagged geometry functions conic-sections or ask your own question.