Can a sum of products be split as a product of two sums? 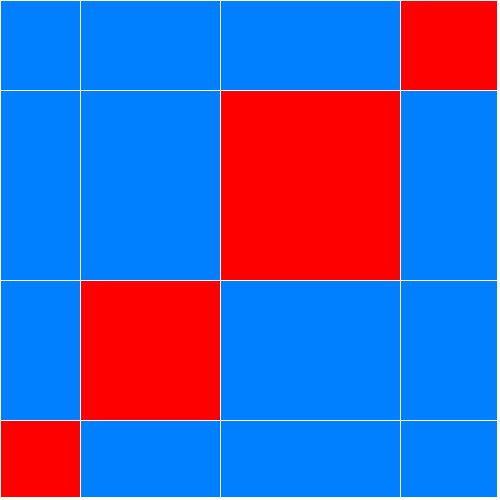 Imagine that the vertical segments are your $P$'s. Then the product of sums is the area of the entire rectangle, whereas the sum of products is only the red area.

^^^That offers a nice summary of summation notation and its properties.

To answer your question specifically, you should not split this into two different summations. Rather, notice that P does not depend on k. You can treat P as a constant and simply move it outside the summation so that it multiples the result of your summation of $x_k$, which does depend on your variable k.

Not the answer you're looking for? Browse other questions tagged algebra-precalculus summation or ask your own question.

1
In general, is the sum of a product less than or equal to the product of its sums?
1
Stuck in this sum using the Perturb the Sum Method.

0
Is joining split sums as a nested sum just the distributive property? How to prove it?
1
On finite sums and products
1
Product of two sums over the same interval
0
How can I split these sums?
2
Product of two sums, one finite and one infinite
0
Sum of Square using Cauchy Product
2
How can i split $\sum_{n=0}^\infty \sum_{k=0}^n \binom{n}{k}*(\frac{4}{7})^{n+k}$ into 2 sums?
5
When is it possible to split an infinite sum?