What does the Circle really mean? 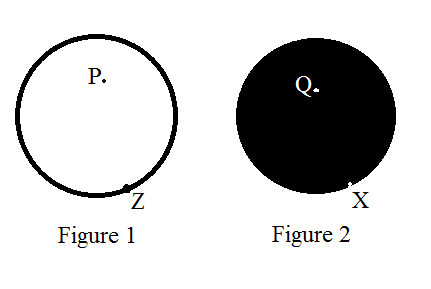 Which of the following figure is really the circle? If a point is on the circle it means that point should be on the circumference is it? (point $Z$ on figure 1).

Point $P$ on figure $1$ is inside the circle not on the circle.
Which means the circle is like a ring with no inside.

In figure $2$, the circle is cut from a paper and hence has an inside.

I am confused with the definition of circles.

The circle is defined as the locus of a point equidistant from a fixed point.

Figure $1$ shows a circle. It can be noted that point $Z$ satisfies the given equation while point $P$ does not satisfy. Hence, we say $Z$ lies on the circle.
Note: It is not wrong to say that $P$ lies in the circle.

Now, what is Figure $2$? It is a disk (also spelled disc). A disk is defined as the region in a plane bounded by a circle. Both $X$ and $Q$ clearly lie on the disk.

Now, point $Q$ satisfies this but it is unclear whether $X$ satisfies it.

But don't be confused, remember the remark I made earlier. "Both $X$ and $Q$ clearly lie on the disk." This is because a disk is conventionally taken to be a closed disk (unless mentioned otherwise to be open). That is, the disk is defined as the set of all points which satisfy: $$ (x-a)^2 + (y-b)^2 \le r^2$$

Hopefully, my answer was helpful :D

The solid region is usually referred to as a disc, the set of all points in the plane that have distance from $p$ less than or equal to a given number.

2
Calculate radius of variable circles surrounding big circle.
0
Euclid's elements proposition 13 book 3
0
Difficulty with circle geometry
1
$QP$ isn't the radius of the circle, but how would you show that it has the same length?
0
inscribed circles inside circle
3
Kissing points of circle packing *on a circle*?
0
Draw a line from point to circle circumference, but pointing at the center
0
how to find circle circumference point from a point inside the circle
2
Circle rotating in circle rotating in circle