Isomorphism vs equality of graphs

I have just started studying graph theory and having trouble with understanding the difference b/w isomorphism and equality of two graphs.According what I have studied so far, I am able to conclude that isomorphic graphs can have same diagrams when represented on paper, but equal graphs also have same diagram on paper, if that is so, then what is the difference b/w equality and isomorphism.

It would be really helpful, if a person could throw some light on what are the difference b/w the above two terms. Specifically, any example of an isomorphic graph which is not equal.

A graph is a set of vertices and edges. Isomorphic graphs look the same but aren't. For example, the persons in a household can be turned into a graph by decalring that there is an edge $ab$ whenever $a$ is parent or child of $b$. So the graph of the inhabitants of a certin house in Evergreen terrace, Springfield, consists of five vertices where each of "Marge" and "Homer" is directly connected with each of "Bart", "Lisa", "Maggie". We would obtain an isomorphic graph with any other typical couple-with-three-kids household, but not the same (i.e. not all these graphs will contain a vertex named Homer).

This two graphs are isomorphic, but not equal. In applications where the graphs are LABELLED, the useful concept might be equality and a mere isomorphism may not be enough.

Isomorphic is as close as can be when the graphs not have identical sets of edges and vertices.

I am comming back to this old question for a reason and I would like to add some thoughts which might be helpful for this discussion.

This answer is inspired by a comment in response to this question.

Let me eleborate some context first.

All considered graphs are finite, simple and undirected.

Let us call a graph which has a fully labelled vertex set, a concrete graph.

Now, in most graph theoretic paper, something like the following is stated all the time and it seems very clear at first.

What we mean is that $G'$ is an abstract representative of some graph for which we ignore concrete (vertex) labeling. $G$ on the other hand can be considered as fully labelled. In that sense: we plug in a concrete graph $G$ and prove isomorphism to $G'$ by creating a concrete labeling for $G'$ a posteriori and we can do that in general for any concrete graph $G$ having property $x$. Usually in the proof the labelling of $G'$ becomes equal to the one in $G$ (because if not, we must define and use the isomorphism map all the time, which is usually omitted). This is in fact found very often. Assume $G'$ is isomorphic to a cycle. You see statements like "Let $G$ be such a graph having property $x$ [... show some stuff ...] then $v_1, \cdots, v_n$ form a cycle, which concludes the proof". But what we mean is: $v_1,\cdots,v_n$ induce a graph isomorphic to a cycle. But what cycle? What isomorphism? The obvious answer is that $v_1,\cdots,v_n$ form the cycle itself.

But in fact this scheme is found very inconsistently and often language is abused. Let us say again that $G'$ is a cycle (or should I say "is isomorphic to a cycle"?). Then, it will not take a long time to find a similar statement:

What the author really means is: iff $G$ is isomorphic to a cycle. This kind of abuse of language is found very often and is wideley accepted. However, we never say the following (and now for obvious reasons)

In part adding to the answer that Lehs gave. This diagram from Wikipedia demonstrates isomorphism, the labels (vertex set) are changed while the edge set (connectivity?) of the graph stays the same.

I'm not sure if for unlabled graphs isomorphism really is the same as equality. 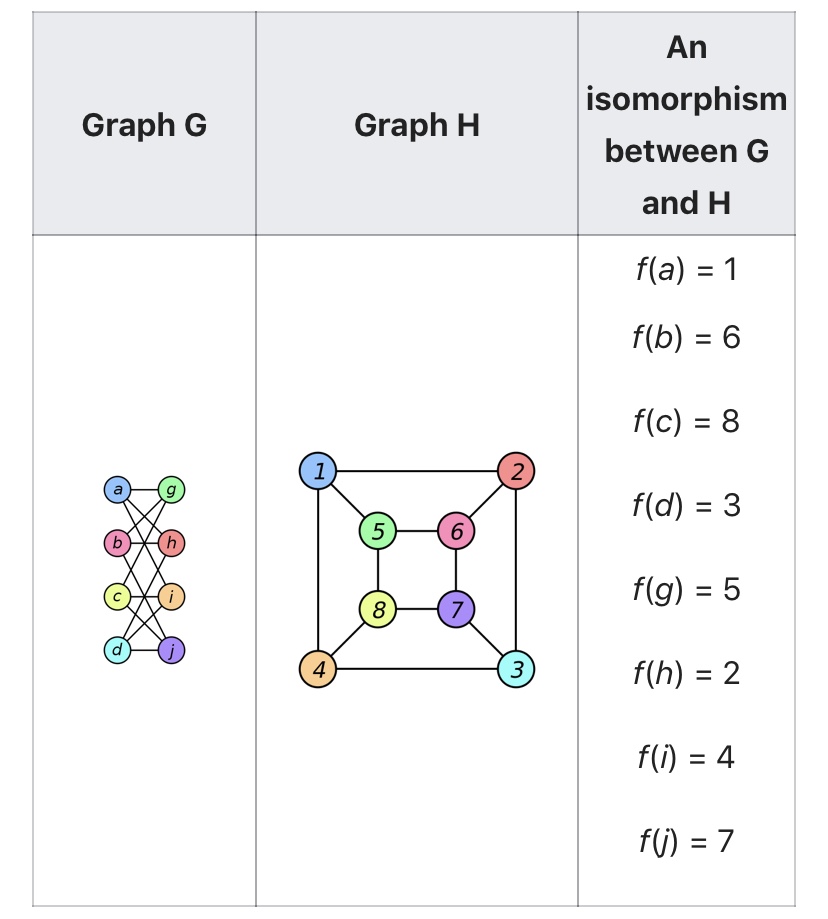 Not the answer you're looking for? Browse other questions tagged graph-theory graph-isomorphism or ask your own question.

2
Graph equality vs. graph isomorphism
2
Line graph $L(G)$ is bipartite if and only if the graph is isomorphic to path or even cycle.