I'm looking for a geometric interpretation of this theorem:

My book doesn't give any kind of explanation of it. Again, I'm not looking for a proof - I'm looking for a geometric interpretation.

Inspired by Ted Shifrin's comment, here's an attempt at an intuitive viewpoint. I'm not sure how much this counts as a "geometric interpretation".

One thing to think about is that the derivative in one dimension describes tangent lines. That is, $f'$ is the function such that the following line, parametrized in $x$, is tangent to $f$ at $x_0$: $$y(x)=f(x_0)+f'(x_0)(x-x_0).$$ We could, in fact, go further, and define the derivative to be the linear function which most closely approximates $f$ near $x_0$. If we want to be really formal about it, we could say a function $y_0$ is a better approximation to $f$ near $x$ than $y_1$ if there exists some open interval around $x$ such that $|y_0(a)-f(a)|\leq |y_1(a)-f(a)|$ for every $a$ in the interval. The limit definition of the derivative ensures that the closest function under this definition is the $y(x)$ given above and it can be shown that my definition is equivalent to the limit definition.

However, though the idea of the first derivative has an obvious extension to higher dimensions - i.e. what plane best approximates $f$ near $x_0$, it is not as obvious what a second derivative is supposed to represent. Clearly, it should somehow represent a quadratic function, except in two dimensions. The most sensible way I can think to define a quadratic function in higher dimension is to say that $z(x,y)$ is "quadratic" only when, for any $\alpha$, $\beta$, $x_0$ and $y_0$, the function of one variable $$t\mapsto z(\alpha t+x_0,\beta t+y_0)$$ is quadratic; that is, if we traverse $z$ across any line, it looks like a quadratic. The nice thing about this approach is that it can be done in a coordinate-free way. Essentially, we are talking about the best paraboloid or hyperbolic paraboloid approximation to $f$ as being the second-derivative. It is simple enough to show that any such function must be a sum of coefficients of $1$, $x$, $y$, $x^2$, $y^2$, and importantly, $xy$. We need the coefficients of $xy$ in order to ensure that functions like $$z(x,y)=(x+y)^2=x^2+y^2+2xy$$ can be represented, as such functions should clearly be included our new definition quadratic, but can't be written just as a sum of $x^2$ and $y^2$ and lower order terms.

Firstly, that this is a well-defined notion regardless of whether we name the coefficients or arguments. The set of quadratic functions of two variables is well defined, regardless of how it can be written in a given form. Intuitively, this means that, given just the graph of the function, we can draw the surface based on local geometric properties of the graph of $f$. The existence of the surface is implied by the requirement that $f_{xy}$ and $f_{yx}$ be continuous.

Here's the best way I've found to think of it.

$f_x$ = the partial derivative measuring the rate of change (the slope) of $f$ in the $x$-direction.

$f_y$ = the partial derivative measuring the rate of change (the slope) of $f$ in the $y$-direction.

$f_{xx}$ = the rate of change of $f_x$ as one moves in the $x$-direction. Similar to the second derivative for a one-variable function, it shows if the slope is increasing (concave up) or decreasing (concave down).

$f_{xy}$ = the mixed partial derivative measuring the rate of change of the slope in the $x$-direction as one moves in the $y$-direction.

$f_{yx}$ = the mixed partial derivative measuring the rate of change of the slope in the $y$-direction as one moves in the $x$-direction.

Here's my reference with a nice figure: http://www.math.harvard.edu/archive/21a_fall_08/exhibits/fxy/

SUPPLEMENT: - For consistency, I've used the idea from Ted Shifrin's comment and Rahul's answer/figure. I've included some colorized figures, which might help with the geometric interpretation for some individuals. 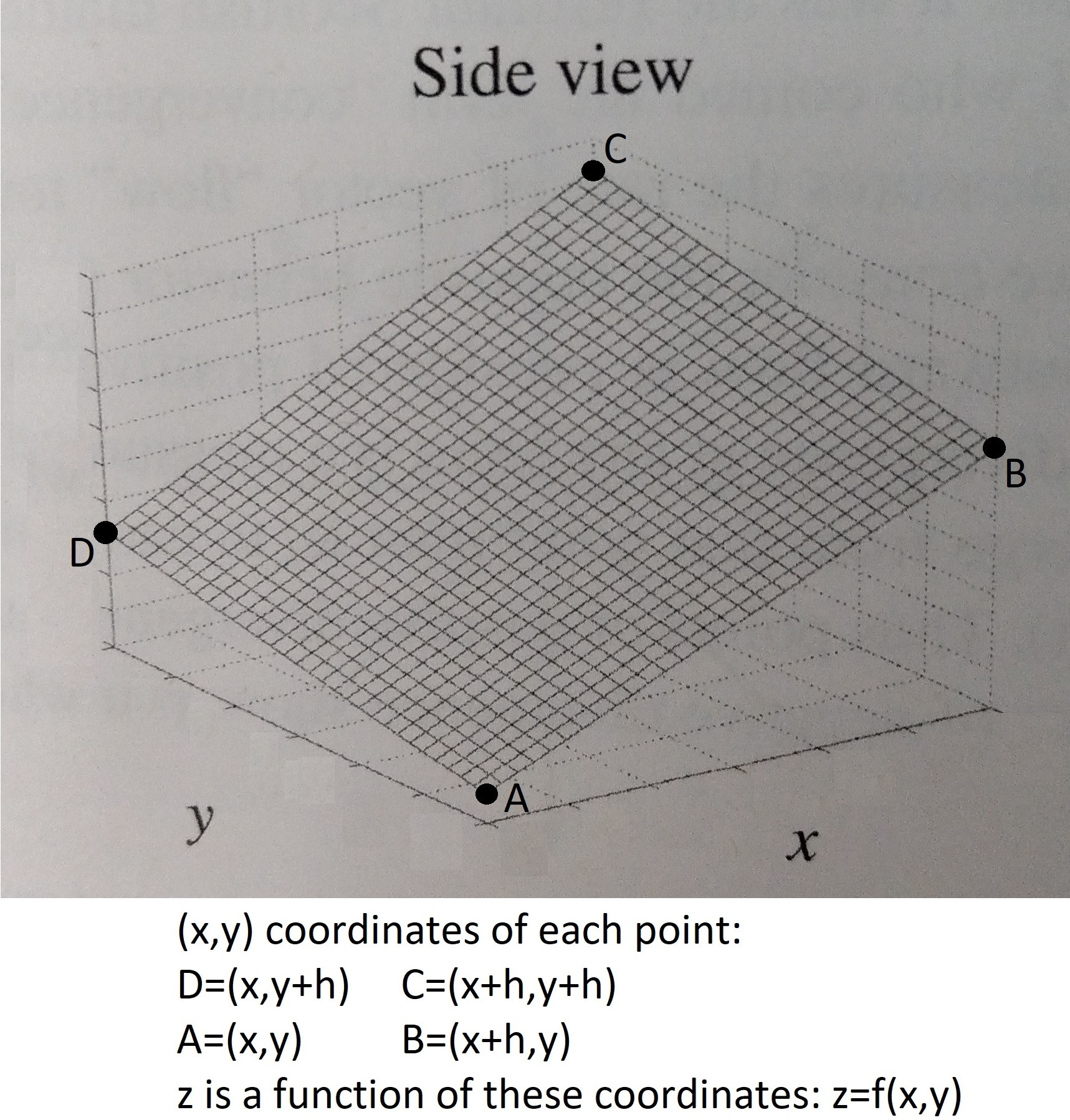 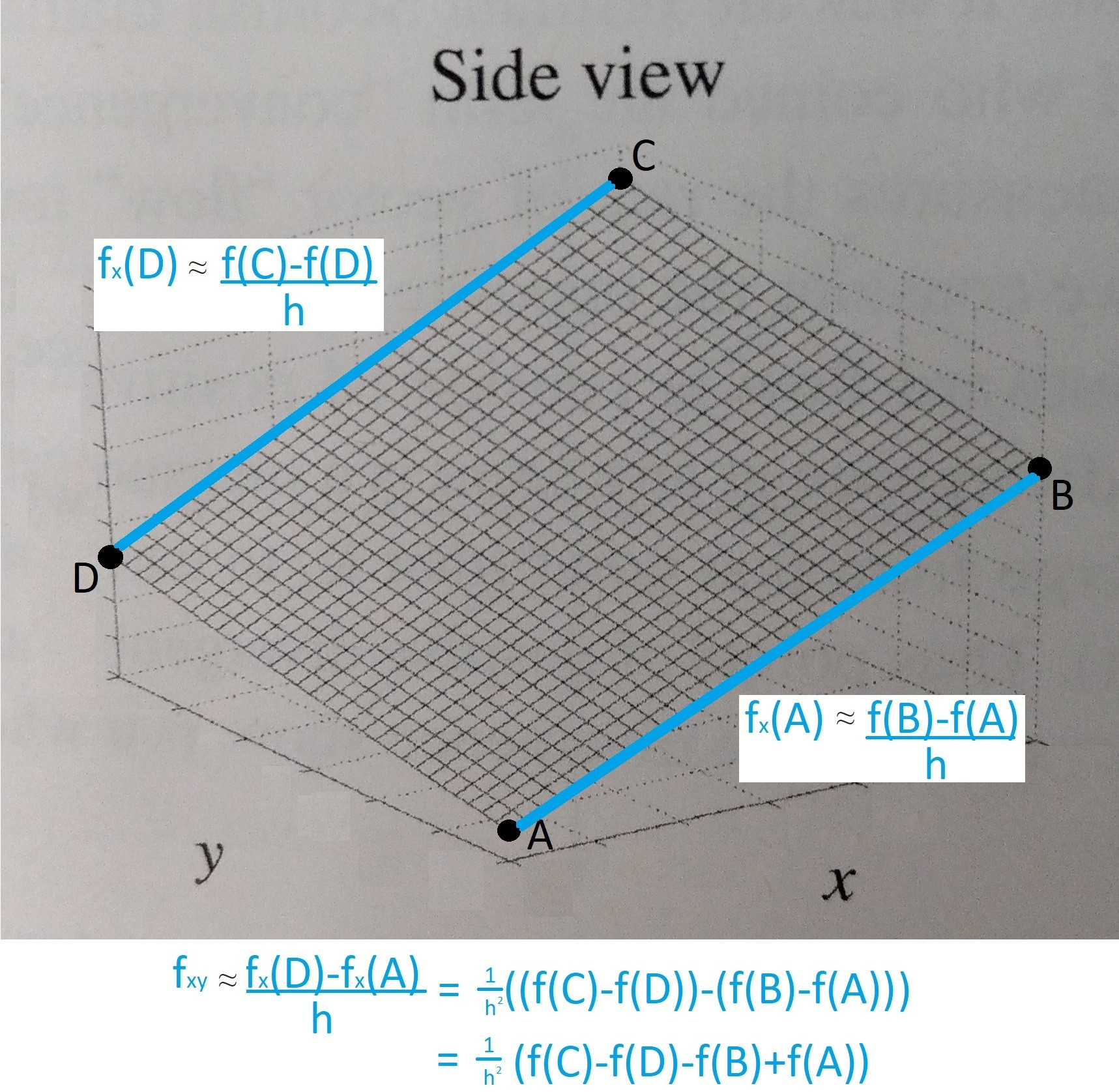 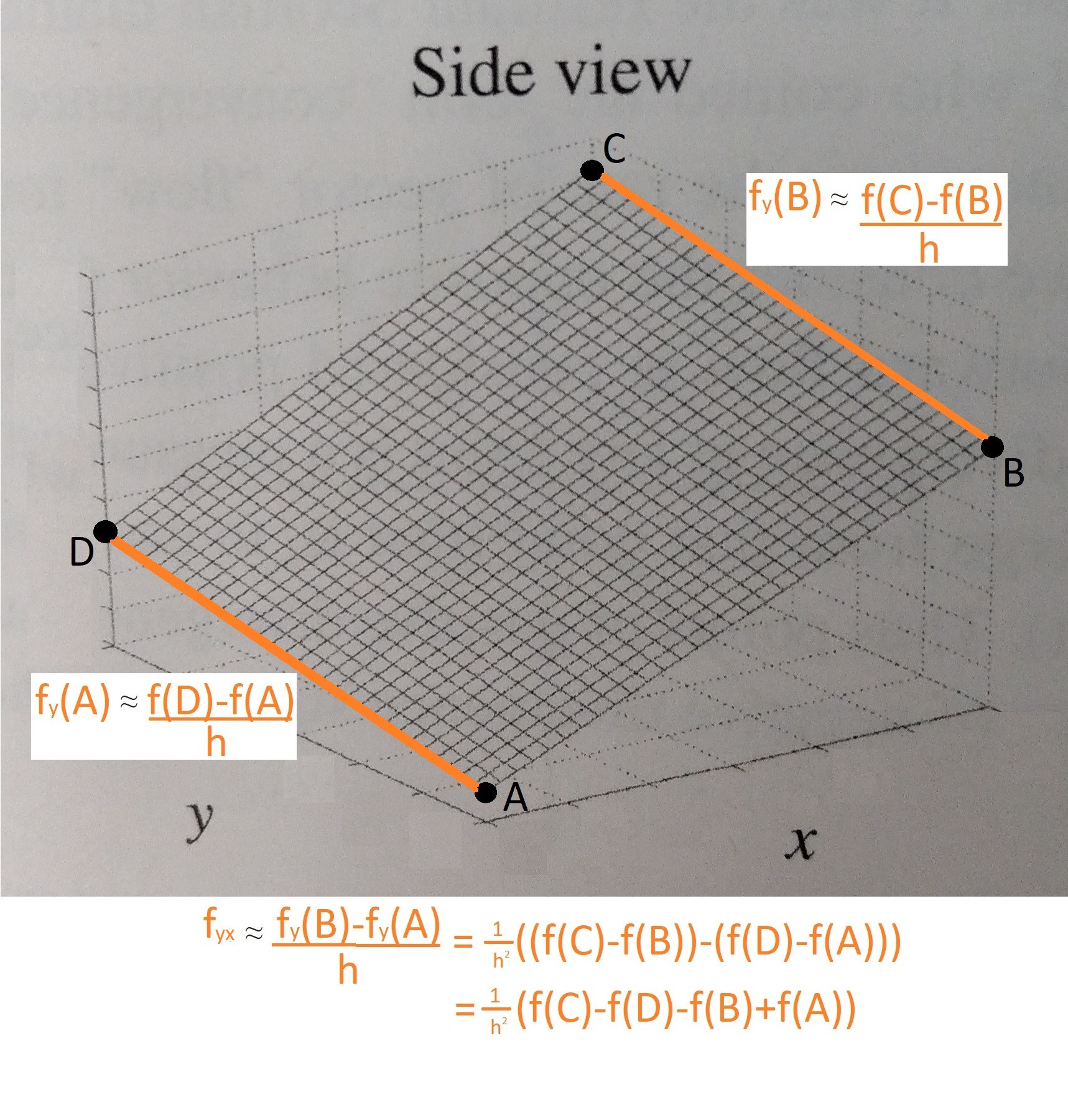 Example of a regular function (graph in blue) and the image of a square (in red) for different lengths (see Rahul's answer): 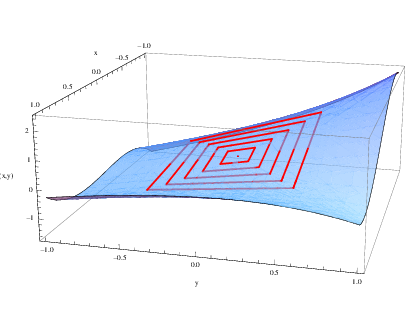 Same picture without the graph of $f$: the opposite segments become parallel when the step decreases. This is a geometric interpretation of Schwarz theorem. 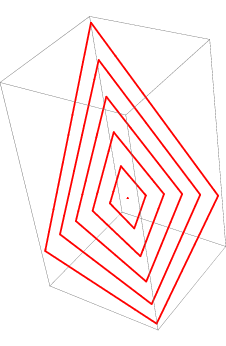 I shall try to explain understanding gained from mechanics of materials or applied mechanics.As far as geometrical interpretation goes, there is nothing more visible than twist in a twisted plate or strip quantifying the mixed partial derivative.

At the level of the differential lengths ( in a sketch made with finite differences) along x- and y-, if $f_{xy}$ is different from $ f_{yx}$ then the points opposite the differential quadrilateral do not meet, and it would not be a closed curve!

For a surface Z= f(x,y).. $Z_{xx}$ are normal curvatures $Z_{xy}$ is geodesic torsion of line on surface in reference direction .

In the the chart above a hyperbolic paraboloid example is given.The same surface is rotated to obtain different equational forms, to study curvatures in a fixed (x-axis) reference.

Torsion of line $Z_{xy}$ is cross derivative.It is also referred to as Twist curvature.

Note that the torsion of asymptotes in the example have opposite sense as sign changes from 2 to -2 for surface z = 2 x y changing to -2 x y.Principal directions of surface have no torsion. The diagonal lines have maximum torsion with maximum value of mixed derivative.

To understand torsion in relation to curvature and torsion of surface lines ( not one dimensional lines in 3-space) the Mohr’s Circle is most instructive.

Euler’s Formula and geodesic Torsion formula must be mentioned (perhaps taught) together as component properties of a single physical surface line just as we have the mathematical sense of straight and mixed derivatives together.

Stress,strain, curvature, moment of inertia are in fact tensors , one direction is for reference and another for applied force.

The first is Euler Formula in surface theory that should be followed by geodesic torsion in its mentioning.

EDIT: Relates to geometry and rigidity in structural design.

Ok, this is very crude and definitely not a proof. I wanted to post it as a comment but I don't have the reputation.

The unsatisfactory part is that $f_{xx}$ and $f_{yy}$ are hard to interpret as "taking two steps" in the $x$ or $y$ directions, but possibly a satisfactory definition of "step" can be conjured up.

Not the answer you're looking for? Browse other questions tagged multivariable-calculus derivatives or ask your own question.