I'm taking a course in Mathematical Logic right now and we have to use semantic tableau to find out if a formula is satisfiable (some interpretations give a value of T).

Given these examples for logical formulas A and B:

How do I determine how to build the tree? I know that the first time you decompose the formula you remove the conjunction, like this:

But I'm not sure why this 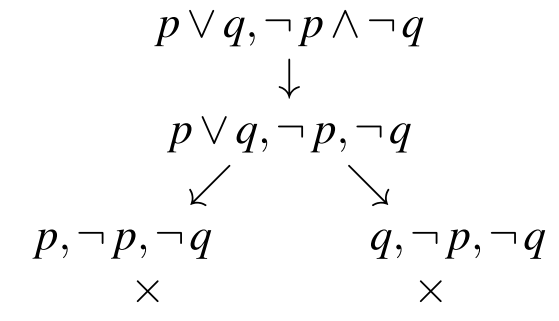 Why did this decomposition happen? Can someone explain to me how the tree came to be, step by step? I read the textbook (Ben-Ari Mathematical Logic for Computer Science) and I'm still confused at how to build the tree.

edit: Thank you all for the helpful answers!

The method of semantic tableaux is an efficient decision procedure for satisfiability (and by duality validity) in propositional logic.

For each formula, every step is uniquely defined, because you have to decompose the formula according to the principal connective.

Thus we have to apply the procedure to $A$ with the goal of verifying if the formuala $A$ is satisfiable or not.

The procedure will always end, because a formula is a finite string of symbols, with only a finite number of occurrences of connectives.

At every step we decompose the final a formula of a branch according to the principal connective applying the above rules.

If the formula $B$ has as principal connective the disjunction, it is $B_1 \lor B_2$. Thus, according to the rules for evaluating the connectives, in order to satisfy $B$ we have that at least one of $B_1$ and $B_2$ must be true. Thus, we branch, one for each possibility.

you can only apply the rule for $\land$, because it is the princupal connective.

In the second step :

$p$ is atomic, i.e. indecomposable. Thus you can only decompose $¬q ∨ ¬p$, applying the rule for $\lor$.

You have two formulae; thus you can choose how to start.

Thus, the "strategy" is : if you can (as in B) use the "branching" rules at the end, in order to have more "compact" trees.

I checked the book, and I think the construction of the semantic tableaux is quite well explained, but I will try to give you some hints about the procedure.

The objective is find a model, an interpretation (a truth assignment to the atoms $p, q$,...) that satisfies the formula. You place the formula at the root (top node) of the tree, and you decompose it, step by step starting from the main operator (connective). At each step (node), depending on the form of the formula that you are decomposing, the tree splits (the node has two child nodes) or not (see Table 2.8 of the book). You follow the procedure until you only have atoms ($p, q$,...) or negations of atoms ($\lnot p, \lnot q$,...) at the bottom (leaves) of the tree. Then you check all the leaves of the tree: if any of them does not contain an atom and its negation, the set of atoms of that leave and all subformulas in the path to the top node are satisfiable.

I hope this helps. I am sure that you will be able to do example B.

I just want to add something. I have been talking about truth values, meaning of the logical connectives,... that is about the semantics of the propositional logic, in order to guide you in the process. But the rules for construction of the semantic tableaux can be given (and that is their main objective) as an algorithm in which the rule to apply at each node of the tree only depends on the form (syntaxis) of the formula there, see section 2.6.2 and algorithm 2.64 in the book. In other words, it is a proof system which you (or a computer) can apply to find out if a formula is satisfiable (or valid, or and inference valid, ... all semantic notions) based only on the form (how it is made up of symbols, a syntactic notion) of the formula.

0
Semantic Tableaux in First-Order logic: How does it work?

2
Proving non satisfiability of the barbers paradox with tableau method
0
Propositional Logic questions about tableau method
1
Need help finding a proof strategy for a propositional logic theorem
0
If no interpretations satisfy a set of formulae U, is it possible for $U\models A$?
6
Intuition about Herbrand Models.
0
Issue proving that a formula is valid using semantic tableau
2
Is a proof by mathematical induction a semantic proof or a syntactic proof?
0
How to prove the formula has no finite model, thus it has no finit domain
2
How to use a Semantic Tableau to show satisfiable and falsifiable
1
Issue proving a Formula to be Valid using Semantic Tableau