So I understand the mechanics of the fundamental group, but I want to gain a more natural intuition behind it. I imagine the fundamental group $\pi_{1}(X)$ to detect "holes" in a space. For example, it detects the hole in the punctured plane. However, it does not detect all type of holes, specifically the hole at $\mathbb{R}^3-0$. Presumably, $\pi_{2}(\mathbb{R}^3-0)$ could do the job in this case. I was wondering if you guys could give me some more geometrical intuition behind the fundamental group. For example, what types of "holes" can $\pi_{1}(X)$ detect? Let's restrict the discussion to subspaces of $\mathbb{R}^{n}$.

Sorry if this is a repost.

Recall the definition of the fundamental group: $\pi_1(X)$ is the set of homotopy classes of maps from $S^1$ into $X$, made into a group by concatenation.

So imagine a particular map $f:S^1 \to X$, I visualize this as taking a (one-dimensional) rubber band, and putting it somewhere in $X$ (I'm allowed to twist it, and have it intersect itself). If $f$ is homotopy equivalent to a constant map -- that is, if you can deform your rubber band within $X$ to a point in $X$ -- then $f$ is a representative of the identity in $\pi_1(X)$. A representative of a non-constant class in $\pi_1$ is one where your rubber band is somehow looped around something, in the sense that you can't shrink it to a point within $X$.

since the question is about gaining intuition of fundamental groups,i would like to explain through basic examples.for eg,say you have a unit circle and a torus and one asks you to distinguish between these two surfaces.A very obvious fact distinguishing these surfaces is that a circle has presence of one hole while torus has two holes.But,this has no meaning until we define a way to mathematically represent holes and show that it is topologically invariant. 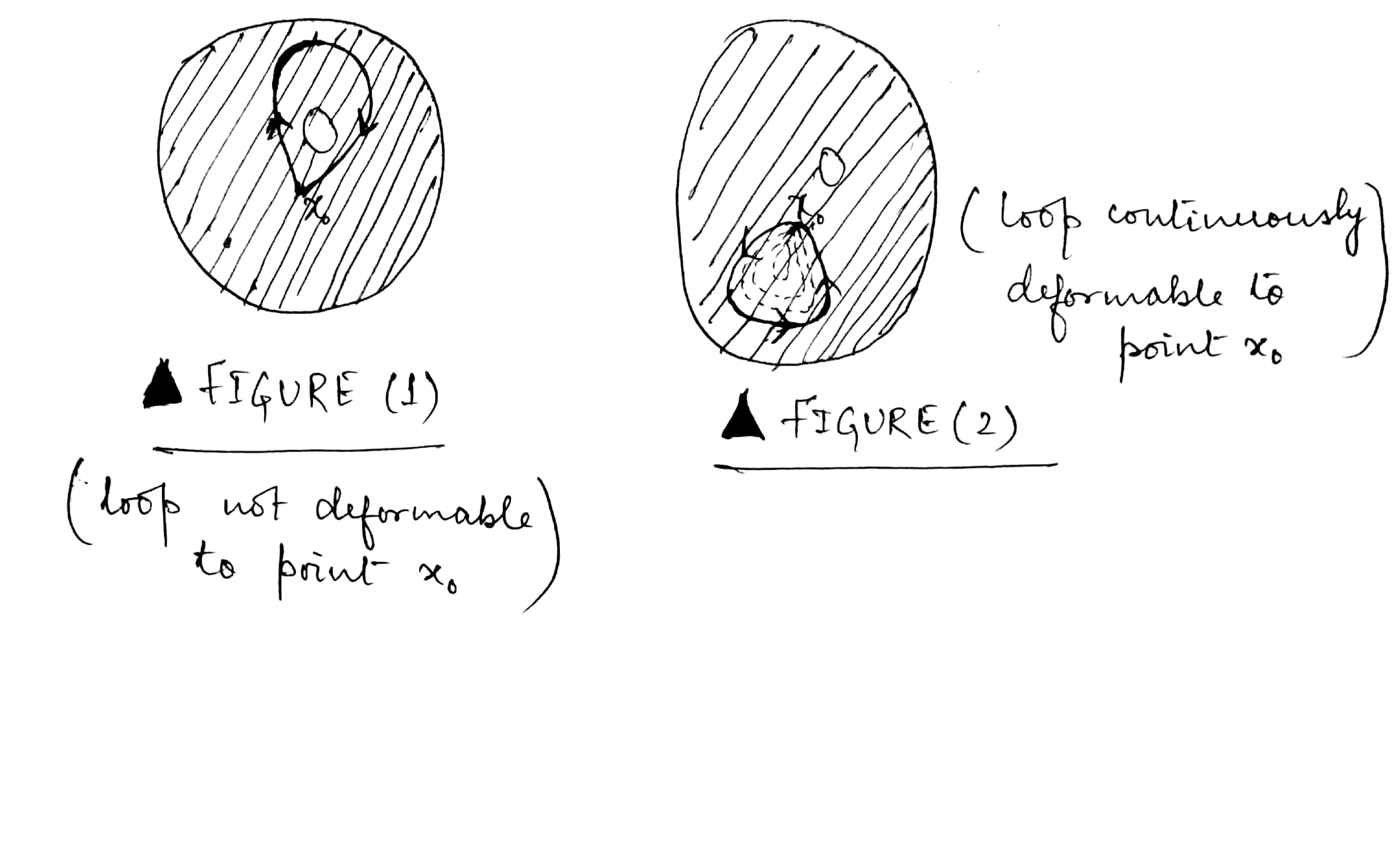 now,we generalize above method even more.We know that the relation of homotopy splits set of all loops based at a point,say $x_0$ into disjoint equivalence classes,where a homotopy class represents set of loops continuously deformable to one another.Moreover, we see that a loop going twice around a hole is not in the homotopy class of loop going once aroud the hole.so,we can associate integers n$\gt0$ ,n =0,n$\lt0$ to the homotopy class of loops according the no of times loop goes aound the hole in postive direction,dooes not wind around the loop and winds around the loop in negative direction.Moreover,the operation n+m has a geometrical meaning :n+m corresponds to going round the hole first n times and then m times.Thus,the set of homotopy classes is endowed with a group structure called the fundamental group which we can define as:

Now,we can rigorously prove that homotopy classes of loops based at a point forms group under the above defined operation (as it was intuitvely clear).Moreover,we show that fundamental groups,which gives measure of no of holes in the space is a topological invariant. Fundamental group as outlined above,detects one dimensional holes in a space.

2
extension of a function to a differentiable function
0
topology on n-colorings of a lattice?