How can I generate random points uniformly distributed on the surface of a sphere such that a line that originates at the center of the sphere, and passes through one of the points, will intersect a plane within a circle. Following are more illustrations and details to make this clearer. The white dots are the points, the red is the sphere, the black circle is the circle in the plane, the green is the elliptical cone enclosing the points: 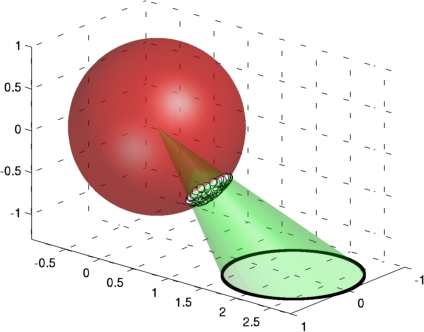 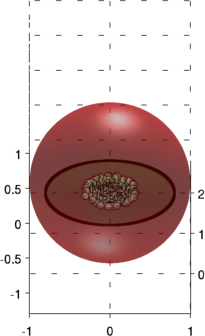 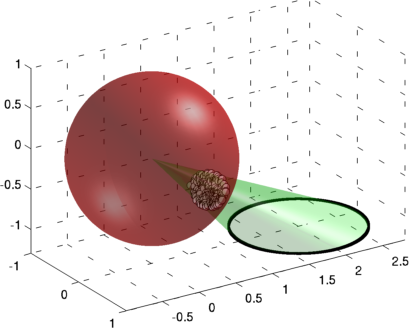 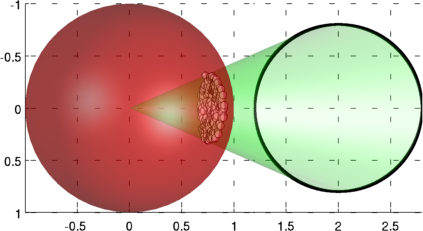 To generate random points uniformly distributed on the surface of a sphere, this works (pseudo Matlab code; where $n$ is the number of the points): 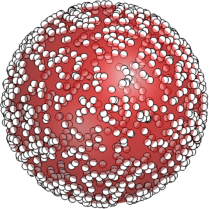 To generate random points uniformly distributed on the surface of a sphere within a circle shaped window, the following works: 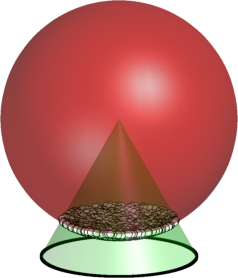 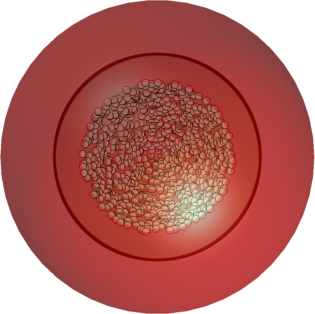 Notice that this algorithm is much more efficient than first generating points uniformly distributed on a sphere (using the previous algorithm) and then rejecting all the points that are outside the circle shaped window. I'm hoping for some mathematical-wizardry to answer my question, and in the same way it does not make any sense to use a point-rejection method for the circle shaped window problem, I hope to avoid it here too.

You might try a point-rejection approach that rejects a relatively small percentage of the points.

As observed in comments, you can improve on sampling over the entire sphere by finding a circular cap that barely covers the elliptical window, and using the method you have already devised to sample uniformly within that cap. This works well for elliptical windows that are nearly circular. For elliptical windows whose "length" is much greater than their "width," you could refine the method in various ways, two of which I will try to describe.

Now select a point uniformly distributed within the sampling region. To do this, you can take transformed Cartesian coordinates $x',y',z'$ with origin at the center of the sphere such that the $z'$ axis passes through the center of the elliptical window. Randomly select an appropriately distributed $z'$ coordinate using the inverse cumulative distribution of $z'$ within the sampling region, which is a piecewise linear function. Then, depending on which zone that puts the randomly generated point, you randomly select a longitude within the applicable ranges of longitude and find the $x'$ and $y'$ coordinates. Determine whether the random point is within the elliptical window; if not, reject it and try again.

You can improve the rejection ratio even further by dividing the sampling region into strips by latitude and including just enough difference in longitude in each strip to cover the elliptical window, but this may not be worthwhile.

I would probably implement Alternative Method 2 (without any additional subdivision of the sampling region) unless the center of the circle in the plane was so close to the coordinates $(0,0)$ (from the figures in the question) that the rejection rate would be better for a spherical cap that contained the elliptical window, and in that case I would use the cap.

This may be way off of what you're looking for. But perhaps it might point you in the right direction. Why not use the brute force method?

If we try to find the locus of $(x_2,y_2,z_2)$ we would get the part of the surface of sphere whose projection on the plane from the center is the circle.

Not the answer you're looking for? Browse other questions tagged geometry 3d random or ask your own question.