Counting the number of paths on a graph

I was wondering how many different possible combinations are there for unlocking an Android phone. In order to do this, you have to choose a path from a graph: 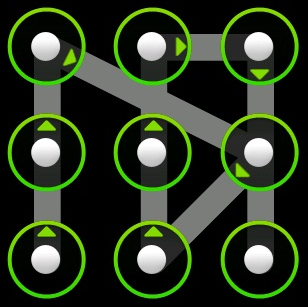 The unlocking paths can have any length between 3 and 9. Is there a simple way to count the possibilities?

Two of the other answer, including the accepted one, use matrix powers which is wrong again because this includes paths which allow passing more than once in the same node. The third answer gives a formula lacking a proof whatsoever (we used to have them in math when I was young), I don't understand why it is wrong, and why it should be correct in the first place, but the result is too big to be correct.

putting this all in a calculator the final result becomes $$985824$$ which is fairly a small number compared to other answers. As the number is pretty small, it is possible to count directly using a brute force algorithm. This has been done by a google engineer in here, and the result found by him for android unlock combination ($389112$) is less than half the value I computed.

If $A$ is the adjacency matrix of the graph, then the $ij$ entry of $A^n$ is the number of paths from vertex $i$ to vertex $j$ of length $n$ (why?). $A^n$ can be computed quickly by diagonalizing.

3
How many paths (seen as subgraphs) of length $l$ are there in a given directed graph?
0
All Possible Pattern Lock Combinations [Reopened]