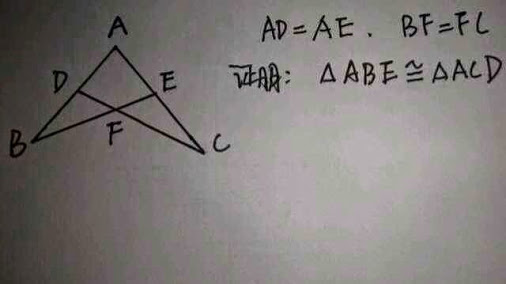 I have found a problem form internet and got stucked trying to proof or disproof it.

The @Matrial's solution seems very promising however solving $FC=BF$ is killing me, wonder if there were solutions, say, more Euclidean?

we do it by using the coordinate system like the picture. 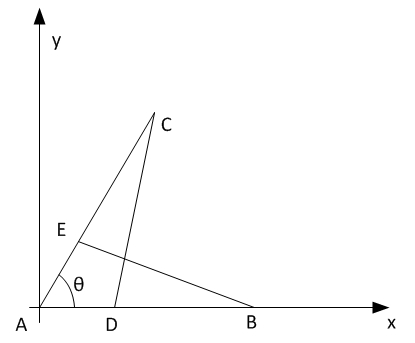 And all the above/previous $\mathbf{erased}$ with much gusto, after recognising that any geometric proof of it will likely be circular, so it will lead one to endless circles... (probably because of the symmetry of the particular congruence).

I think, but I am not sure, that it can be solved another way. If we can prove that the quadrilateral $DFEA$ is inscribable, then one may try using the corresponding ratios one gets from the power of the points $B$ and $C$ relative to the circumscribed circle of that quadrilateral. Perhaps the assumptions are enough to make those powers equal, hence all the goodies therein.

And indeed, it looks like Desargues' with the additional assumptions $AD=AE$ and $BF=FC$, which should be immediate.

Sketch of proof for the general case:

[*] The degenerate case of the above construction, is when $DE$ is a diameter of $c$. In this case the inscribed quadrilateral will be a square, with both its diagonals diameters, but in this case assumptions $BF=FC$ don't make sense, so this case is rejected. If you omit this case, point $C$ exists.

Needs a lot of work to see fully. If you don't see it, I will try to add more to this.

Construct BC then Construct a line parallel to BC through point A.

Now we have angle FBC = FCB = AGE = AHD (by ulternate interior angles of parallel lines cut by a transversal.)

Now by AAS we have trianlge AGE congruent to AHD

And now we have triangle AEB congruent to ADC by ASA

Sorry about the bad formatting but I'm in quite a rush.

Not the answer you're looking for? Browse other questions tagged triangles congruences-geometry or ask your own question.