Notation for a subsequence of a sequence

What is the notation for expressing that $S'$ is a (ordered) subsequence of $S$?

Here is a handout on sequences that manages to avoid the problem by stating the definition of a subsequence and then simply stating that one is a subsequence of another each time. This, however, does not seem to be what one would like to do.

And if you want to denote this just with the $S'$, from Structural Additive Theory, by David J. Grynkiewicz, we find the notation of defining a subsequence $S' | S$, where $S$ is a sequence. He also notes in his book that "All notation and conventions for [unordered] sequences extend naturally to ordered sequences."

Hopefully you are now convinced that this notation is relatively well used, and you should be able to find plenty more examples of this by searching online for "sequences notation". One thing to note is that oftentimes these curly brackets {} will be substituted for parentheses (), such as here, or in Mitra's comment itself.

This notation is commonly used, and is very intuitive.

For sets, we have $S'\subseteq S$. For ordered sets, it will be best to have $\subset$ with an arrow at the bottom end. The closest notation available to this in LaTeX is \hookrightarrow which looks like this $\hookrightarrow$. So we can denote $S'\hookrightarrow S$. But if this is not satisfying, then there are also ways to draw and implement your own symbols in LaTeX, using PSTricks, TikZ and so on. Just surf a bit on the Net about designing symbols for LaTeX.

I am adding my idea of the symbol, drawn in MS Paint. If you like it, you could figure out how to implement it in LaTeX. 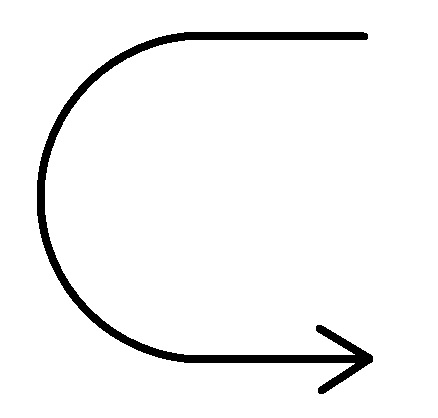 Let me give a foundational reference in support of the notation "$|$" suggested by Isaac Browne. Since you are apparently dealing with finite sequences of elements of some set $A$, every such sequence defines a word of the free monoid $A^*$. Thus subsequences are exactly the subwords as studied in [2]. Lothaire says that a word $u$ divides a word $v$ (notation $u | v$) if $u$ is a subword of $v$.

Let me just mention a key result in this area, known as Higman's lemma [1]: if the alphabet is finite, then the division ordering is a well partial order.

Before introducing the subsequence notation, here is a definition of a sequence that is suitable for many mathematical investigations (c.f. with this wikipedia link):

Although sequences are a type of function, they are usually distinguished notationally from functions in that the input is written as a subscript rather than in parentheses, i.e. $a_n$ rather than $f(n)$. There are terminological differences as well: the value of a sequence at the input $1$ (or $0$ - depends on the domain) is called the "first term" (or first element) of the sequence, the value at $2$ is called the "second term", etc. Also, while a function abstracted from its input is usually denoted by a single letter, e.g. $f$, a sequence abstracted from its input is usually written by a notation such as ${\displaystyle (a_{n})_{n\in \mathbb N}}$, or just as ${\displaystyle (a_{n})}$. Here $\mathbb N$ is the domain, or 'index set', of the sequence.

Here is a definition of a subsequence (c.f. with this wikipedia link):

The strictly increasing sequence $n_k = k^2$ of numbers can be used to extract a subsequence of $S$:

Many times an acceptable way of describing a subsequence setup is to simply use, say, the English language. For example,

If somebody asked me to design new notation to denote that some (finite or infinite) sequences are subsequences of some other sequences I would do it in this way:

I will not go here into definition(s) of what exactly means that some sequence is a subsequence of some other sequence, because good information about that is contained in answers already posted. I will just state this notation of mine.

If some sequence $s$ is a subsequence of some sequence $r$ then I would denote that relation(ship) as $s \subseteq_o r$, where little $o$ tells us that we are dealing with ordered sets.

There are other facts that can be written about all of this, but they are mostly trivial so I will not write about them here and now, but will conclude this answer in a hope that you could like this approach here which is extremely simple.

I appreciate all the effort and attention put into this question in the last week. Unfortunately, the answer seems to be "there is no such standard notation". Some interesting ideas were generated nonetheless!

Given a metric space $X$, let me for now use the notation $S(X)$ for the set of all sequences $a=(a_n)_{n\in\mathbb{N}}$ that take values in $X$. There have been some suggestions for a notation that resembles the inclusion of sets, but since the relation of being an (ordered) subsequence also introduces a partial ordering on $S(X)$, let us investigate as to whether it would be useful to emphasise this fact by using a symbol like $a\unlhd b$, $a \lesssim b$ or $a \ll b$. Let me stick with the first one.

That are the first scenarios that come to my mind in which I want to think of $\unlhd$ as an ordering. However I do not think that students would really benefit from the notation, as most things I've just mentioned are rather trivial. So why introduce a new notation?

Moreover there also lies some danger in using an ordering symbol. Everything looks nice, when we write sequences as simple letteres $a$. But often we rather write $a=(a_n)_{n\in\mathbb{N}}$ and especially if we stick with $n$ all the time, the expression $$(a_n)_n \unlhd (b_n)_n $$ suggests that there is a pointwise comparison à la $a_n \le b_n$, which is at best meaningless and wrong at worst.

All in all, I don't think that introducing a new symbol would make anything clearer or easier. As has been mentioned several times in the thread before, plain English sometimes works best.

Not the answer you're looking for? Browse other questions tagged sequences-and-series notation or ask your own question.