Classical presentation of fundamental group of surface with boundary

It is well known fact about fundamental group of orientable compact surface:

but I don't know where find a book with proof of it. I was looking in classical positions as: Hatcher, Massey, May, Greenberg without success. The best what I found is calculation of fundamental group of surface without boundary, but boundary is important for me. Could anybody help me?

OK, my bad, Fulton's Algebraic topology: A First Course only deals with the closed case. I'll suppose that you know this case quite well.

Let's do the bounded case by hand.

Now, take a needle, and pierce a hole in the middle of the 2-cell. You get $F_{g,0} \setminus \textrm{a point}$. Deformation retract the pierced 2-cell on its boundary: that creates a movie whose opening scene is this pierced surface, and whose closing scene is the $1$-skeleton, which is a wedge of $2g$ circles (the $a_i$'s and the $b_i$'s). What happens in the middle of the movie? Well, you have a surface with a disc-shaped hole which expands with time. Topologically, it's exactly the surface $F_{g,1}$ of genus $g$ with 1 boundary component.

So we have learned two things:

Second case: the sphere with holes 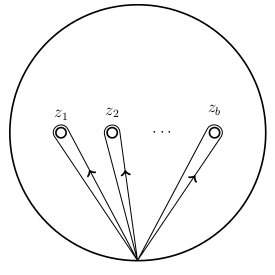 It is probably worth noting that you can rewrite the relation so that it expresses $z_b$ (say) as a word in the other generators. You can then eliminate it and notice that this is also a free group (again, as long as $b > 0$, $F_{g,b}$ deformation retracts to a graph).

Not the answer you're looking for? Browse other questions tagged algebraic-topology surfaces fundamental-groups or ask your own question.