The following is from Prof. Jahn's book " Intro. to the theory of nonlinear optimization" about tangent cone: 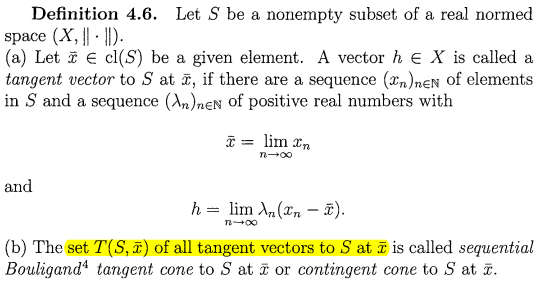 After definition, he gave an example:

My question is: Does the tangent cone include S? (In the def., it says tangent cone is a set of all tangent vectors to S at bar(x))

In the figure, T(S, bar(x)) should not include the region S?

First of all, let's clear something up. Note that the tangent cone is a set of vectors at a point, which is not exactly the set of points in the highlighted region (the two sets contain elements of different "data types"). The question that you seem to be thinking of, then, is whether the tangent cone at a point contains vectors that point from $\bar x$ into $S$.

Note that if your point $\bar x$ happens to be $\bar 0$, then you can validly think of the vectors emerging from $\bar x$ as points whose coordinates are given by their components, hence the first picture.

As an example of when the tangent cone doesn't necessarily contain vectors pointing into the space, take your region to be the border of the set $S$ that is drawn.

Not the answer you're looking for? Browse other questions tagged convex-analysis dual-cone or ask your own question.