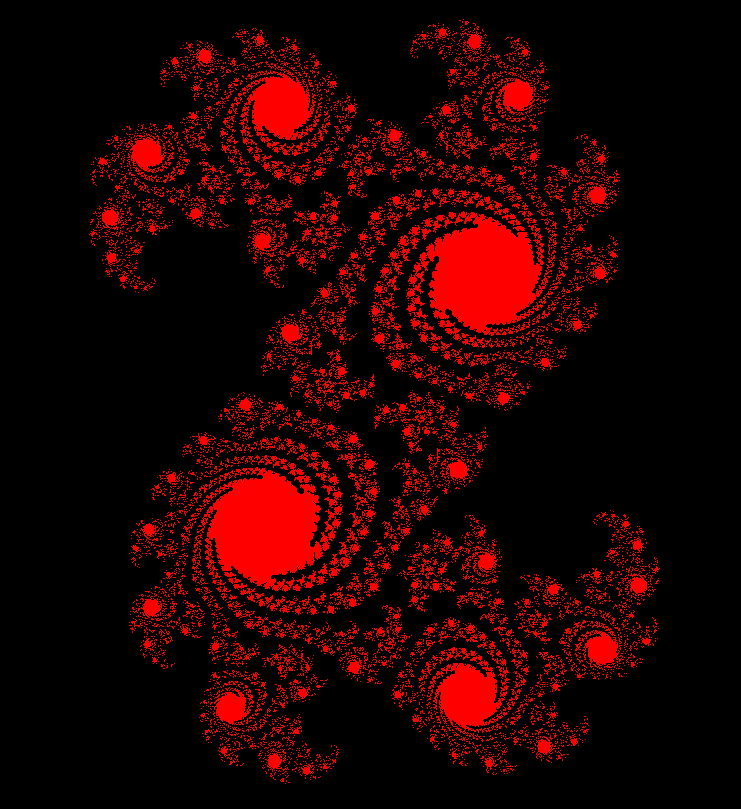 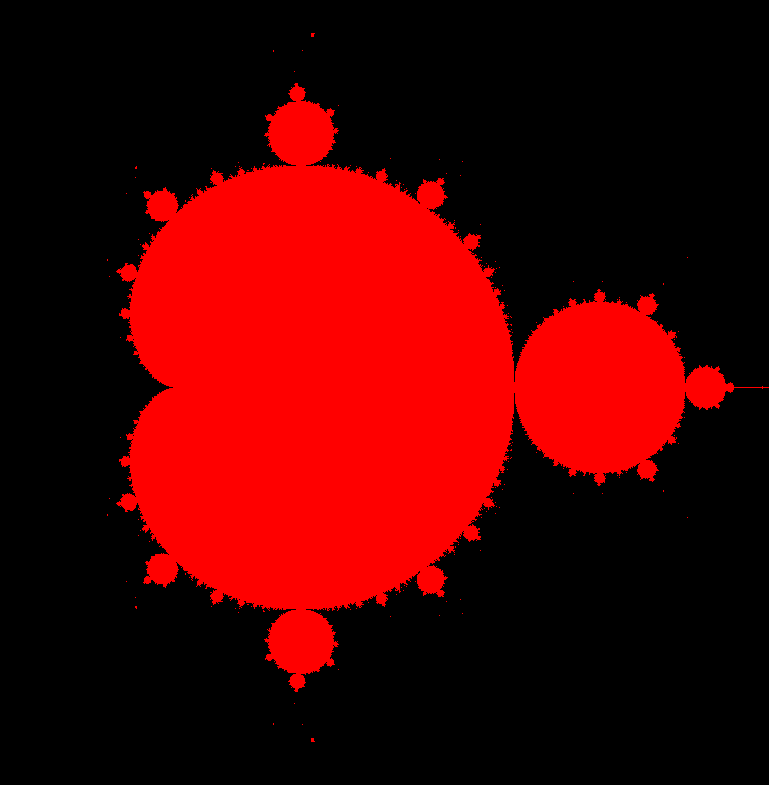 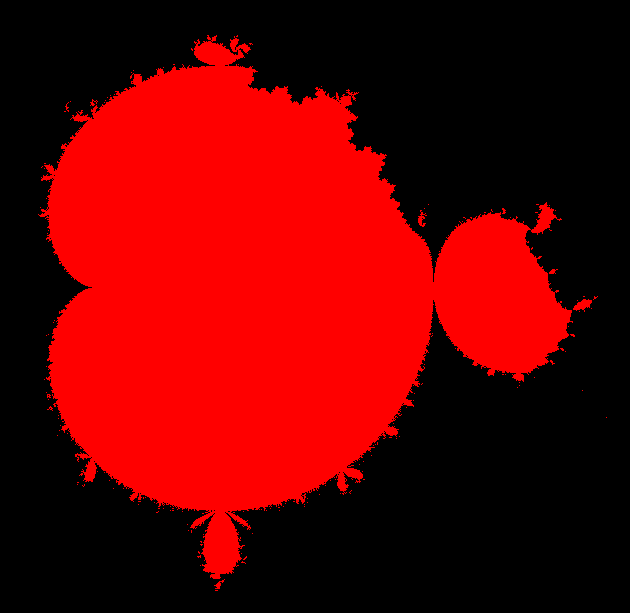 The first looks like the Mandelbrot set, and the second looks like what it would look like if the mathematician were hungry, and decided to take a large bite out of it.

And here's an example of what it looks like when we plot over variables 2 and 4: 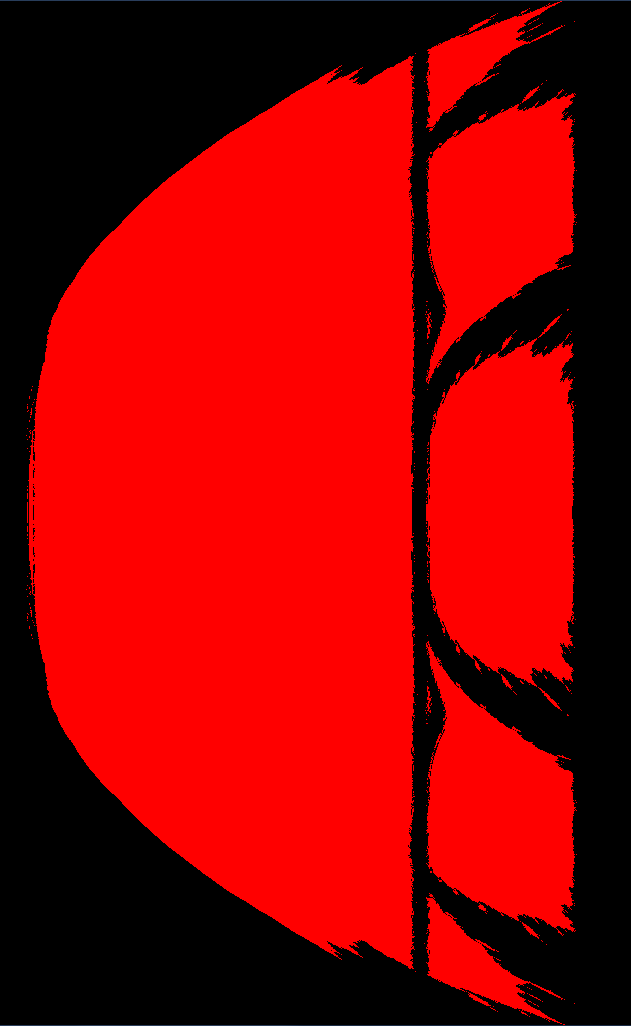 So it (visually, at least) looks like the filled Julia and Mandelbrot sets are just slices through a 4-dimensional solid, taken at different angles.

as the projection of the solid along the 3rd and 4th coordinates. Using a GPU accelerator, I was able to make a plot of $I_{34}$: 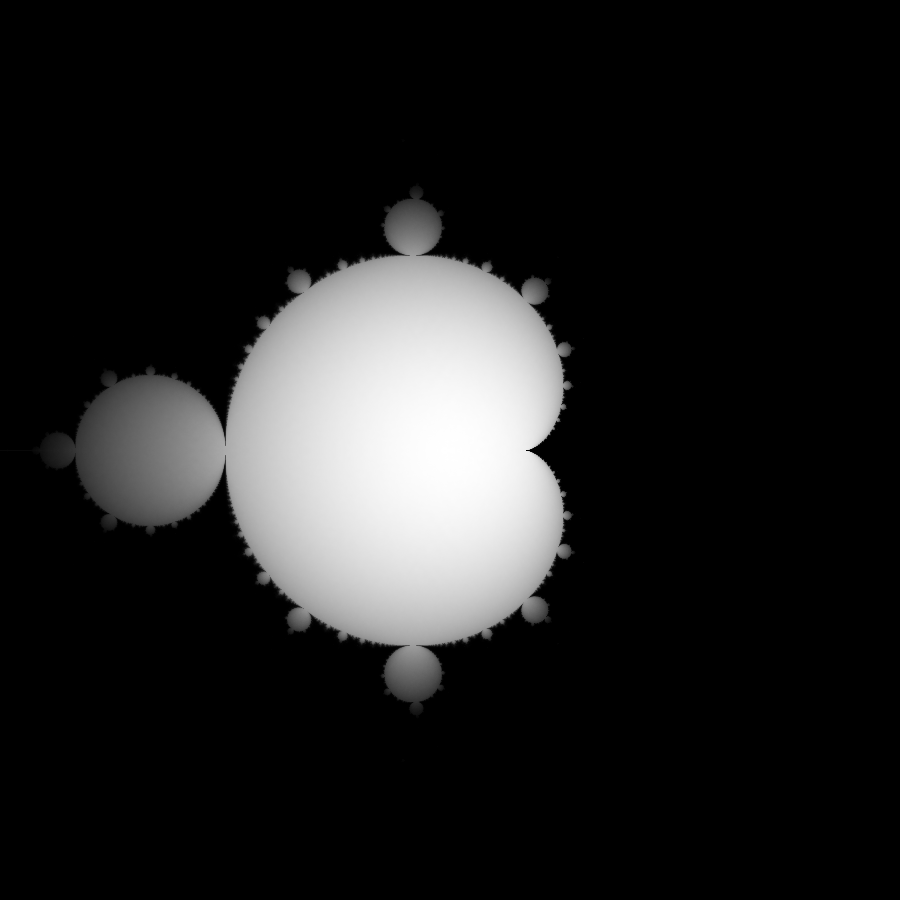 This suggests that the area of the filled Julia set plotted as a function of $c$ looks somewhat like a Mandelbrot set, a fact which is also reproduced here using a slightly different technique.

Numerically integrating over variables 3 and 4 yields this: 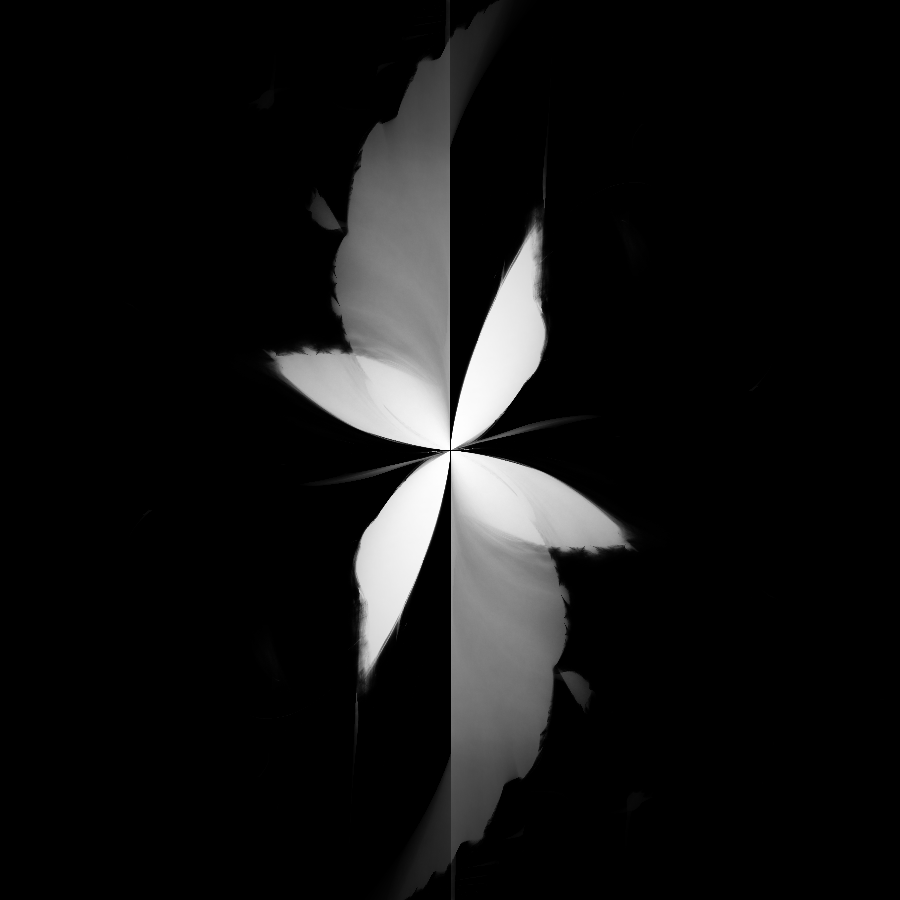 What on Earth is it?

EDIT: Apparently I'm mentally retarded; there was a bug in my code, and the previous image is an error (albeit an interesting-looking one). This is what the projection of $d_{x,y,z,w}$ on coordinates 3 and 4 really looks like: 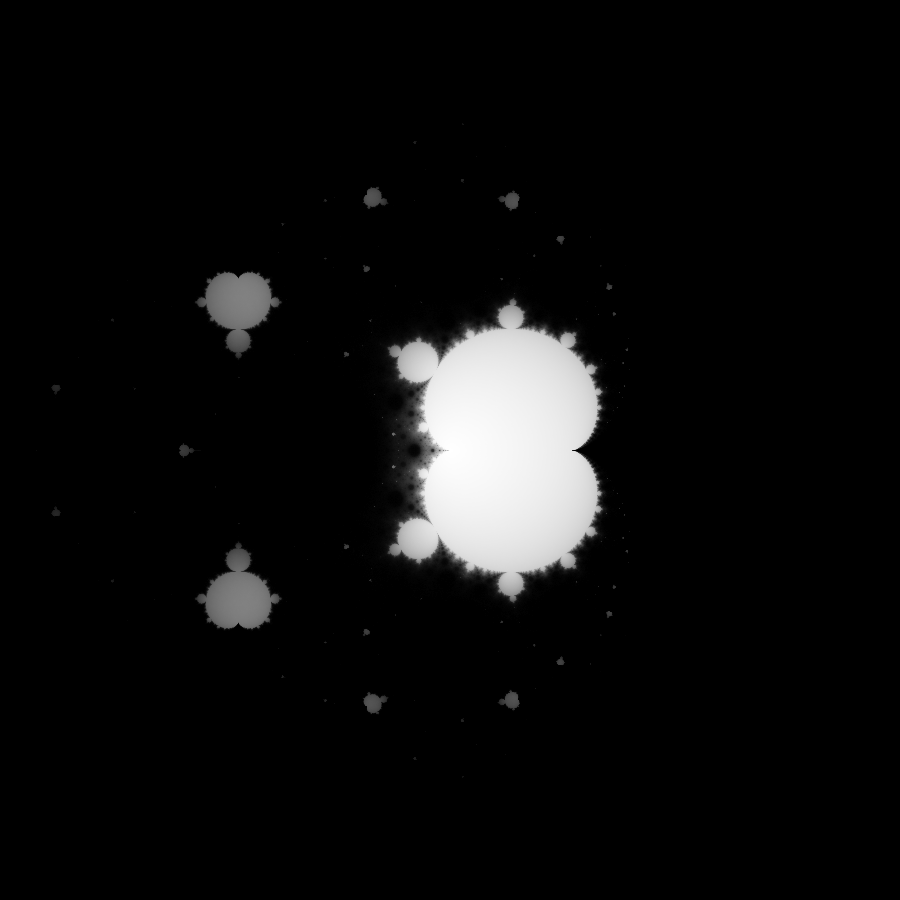 Here's a bigger version (right-click and open in new window to get full size): 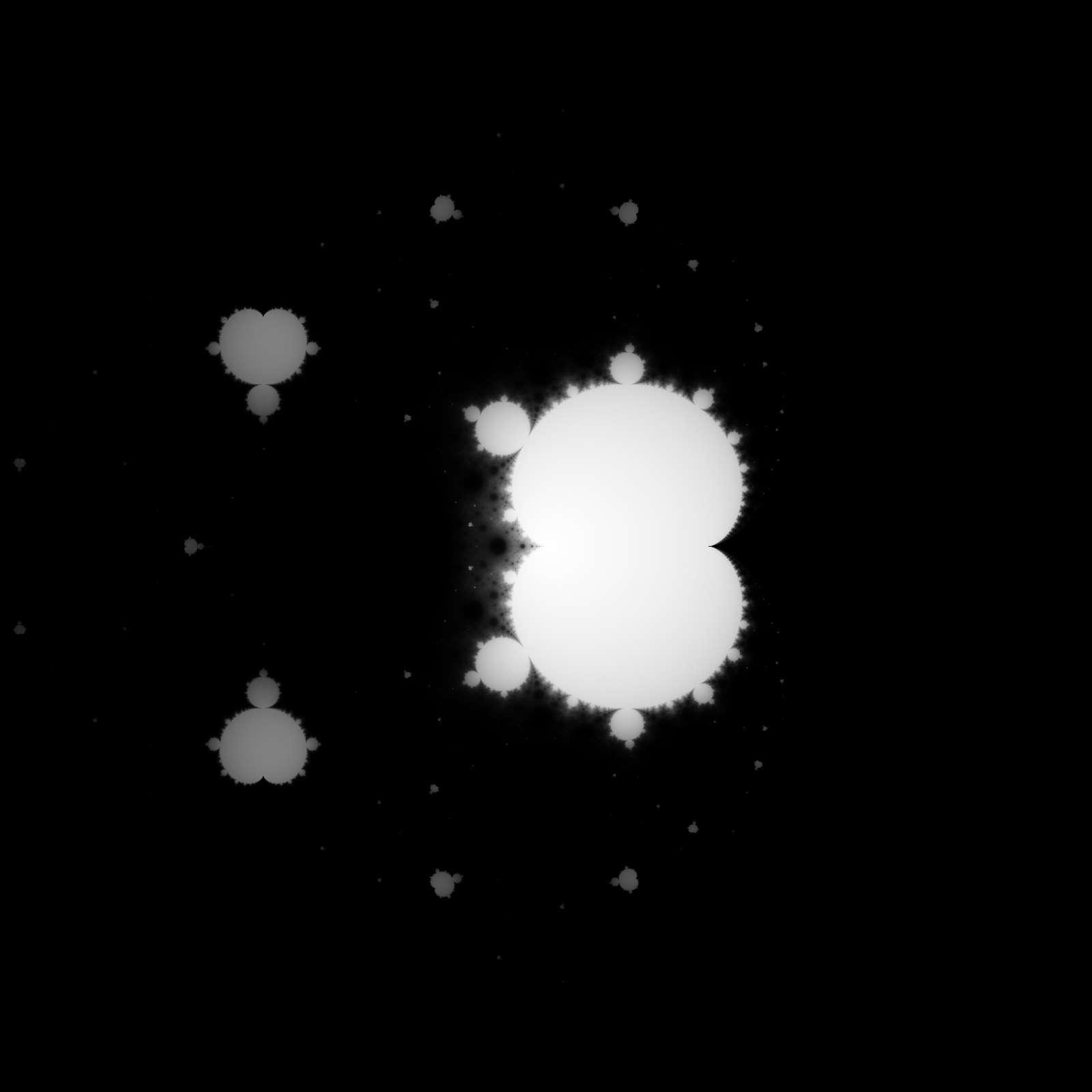 First, I think you've got a couple minor points of confusion in your definitions. Specifically, I think you've got the roles of $x+iy$ and $z+iw$ reversed. In addition, it's unclear what "$f_c^{\infty}(z)$ exists" means. In most contexts, I'd assume that means $\lim_{n\rightarrow\infty}f_c^n(z)$ exists but I suspect that you mean that the orbit $f_c^n(z)$ is bounded.

Assuming my interpretations are correct, then all your observations can be explained if we consider the construction of quadratic Julia sets and the Mandelbrot set carefully. If we define $f_c(z)=z^2+c$, then:

In both cases, it can be proved that, if the orbit ever exceeds two in absolute value, then the orbit diverges to infinity.

Finally, your $g_c(z)=z^2+c/z$ is potentially very interesting but likely requires much more careful analysis. You're no longer dealing with polynomials but more general rational functions and to obtain truly interesting results, you'd need to deal properly with the point at infinity and analyze the critical points of $g_c$, of which there are three. The notion of a "filled" Julia set really makes no sense in this context, but the notion of the Julia set as the closure of the set of repelling periodic points makes perfect sense. Here are a few images of Julia set from this family generated by Mathematica's JuliaSetPlot command, which is new in V10: 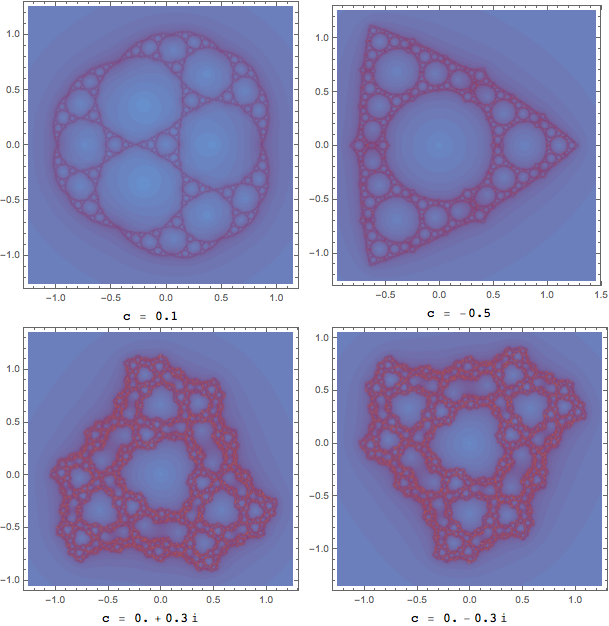