What are the ordinary and singular points of the first order diff. equation?

Consider a first order differential equation. What do ordinary and singular points mean? What do they represent? (I cannot understand their formal definitions so please explain with examples. Thank you.)

After some research I noticed something. Consider the direction field of the $x\dot{y}=y-1$: 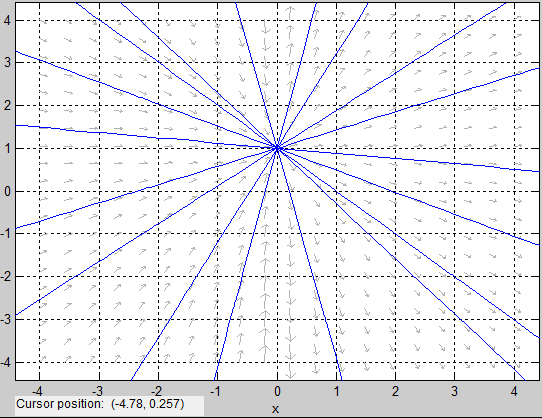 I am pretty sure that an ordinary point should have one and only one (existence and uniqueness) line element (arrows in the picture).

Therefore all points except P(0,1) are ordinary points. On the other hand, P(0,1) is part of more than one integral curve and there are different line elements for each curve. This point violates uniqueness condition.

I think this point is a singular point. However, I don't know if it is regular or irregular. Please correct me if I am wrong and tell me if P(0,1) is irregular or not.

We read from the wikipedia arcticle http://en.wikipedia.org/wiki/Regular_singular_point.

A meromorphic function is a function that is holomorphic on $\mathbb{C}\setminus D$ where $D$ is a discrete set. And holomorphic or analytic at a point $x_0$ means equivalently: it admit complex derivative at $x_0$, its Taylor series converges to the function in a neighbourhood of $x_0$. What happens in $D$? Those points are called poles and the function goes to infinity like $\frac{1}{z^n}$ for some $n$, and that $n$ is the order of the pole in $x_0$.

Is it somewhat clear? Or I just repeated some already know and already read notions?

By analytic, we mean that there is a Taylor series for the function in a neighborhood of $x_0$. This can be checked via Taylor's theorem and the series should be convergent.

The definition of regular and irregular singularities is given only for the second order equations:

The example at the above question can be written as below:

Since there is no Taylor series for $\frac 1 x$ at $x_0=0$. This point is a singularity. We cannot tell whether it is irregular or not because it is not a second order equation.

The scope of this answer is only limited with Tenenbaum's book and what I understand from it. I think Lolman's answer is much broader but you should have a higher level of knowledge to understand it.