Probability of a number being greater than A and less than B?

Let's say I will be presented with a random number from 0-9 (so 10 possibilities), but I am asked beforehand if I can make a prediction about its value.

A visual comparison of both scenarios is below: 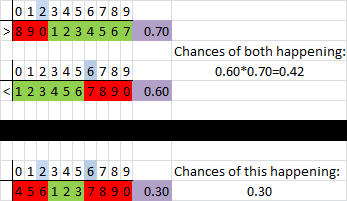 Think about it this way:

Your argument, where you multiply by .6, is incorrect because .6 is the chance that it's less than 6 in all cases. This is what I meant in my comment with "independence". You can find the probability of two events happening simultaneously by multiplying their respective probabilities if they do not influence each other's probabilities. If the two events do influence each other's probabilities (as they do here), then you have to use the so called multiplication rule: $$ P(A\text { and }B)= P(A)\cdot P(A, \text{ given that }B \text { occurred}) $$

0
Probability of number 6 occurence between 8 and 12 when die is tossed 60 times
2
Probability of picking exactly one correct from a pool of 6 incorrect and 4 correct
2
Probability math debate
44
Picking two random real numbers between 0 and 1, why isn't the probability that the first is greater than the second exactly 50%?
1
What's the chance that a number randomly drawn from a set of numbers is bigger than one drawn before it?
2
Rolling 10-sided dice with shifting probabilities
2
Probability of getting a certain card depending on how they are dealt and number of players
6
I wake up in a random class and hear 6 biology-related words. How certain should I be that I'm in Biology class?
0
Probability of a roll on a 20 sided die being greater than or equal to a roll on another 20 sided die x 2