What is the oldest open problem in geometry?

Geometry is one of the oldest branches of mathematics, and many famous problems have been proposed and solved in its long history.

What I would like to know is: What is the oldest open problem in geometry?

Also (soft questions): Why is it so hard? Which existing tools may be helpful to handle it? If twenty great geometers of today gathered to work together in the problem, would they (probably) be able to solve it?

P.S. The problem can be of any area of geometry (discrete, differential, etc...)

Does every triangular billiard have a periodic orbit?

For acute triangles, the question has been answered affirmatively by Fagnano in 1775: one can simply take the length $3$ orbit joining the basepoints of the heights of the triangle. 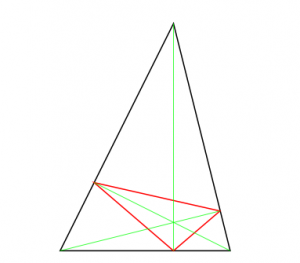 For (generic) obtuse triangles, the answer is not known in spite of very considerable efforts of many mathematicians. Apparently, A. Katok has offered a $10.000$\$ prize for a solution of this problem.

One of my favourites because it's just so simple to state. Discussed in this MO question and related to an also very interesting, though solved question/puzzle which I posted here a while ago. I'm not sure when the problem was first stated but it could certainly have been understood by even the earliest mathematicians.

Can a disk be tiled by a finite number of congruent pieces (You can rotate or flip pieces onto each other) such that the center of the disk is contained in the interior of one of the pieces?

So far, the only kinds of tilings of the disk by congruent pieces, which we know of, all have the center of the disk lying on the boundary of more than one piece. Here are some examples which fail to have the center in the interior of one of the pieces: 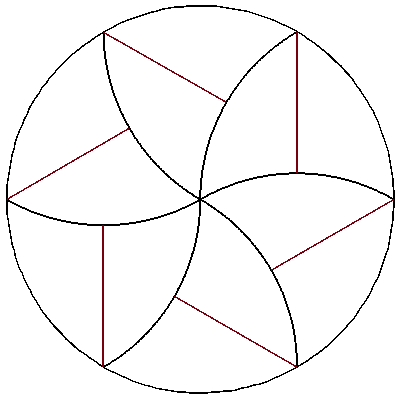 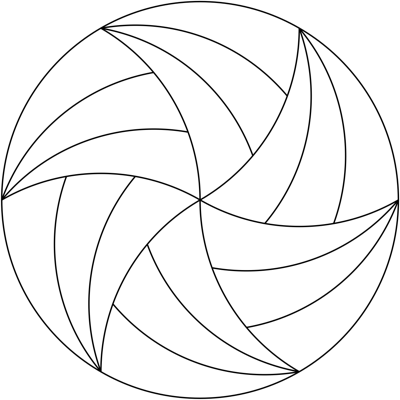 I should add that by 'piece' we mean some nice subset of the disk such as homeomorphic to a disk itself, and equal to the closure of its interior.

The $n$-body problem is an ancient problem that was originally a problem of Euclidean geometry (which was originally identified with the study of "space" --- physical space and abstract geometry were not conceptually separated until the modern era). The problem was to determine the motion of $n$ celestial interacting through gravity. It traces its origins to the ancient Greek astronomers, was studied extensively by Kepler, Newton, Poincaré, and continues today. A mathematics competition was posed in 1885 by King Oscar II of Sweden and Norway offered a prize for its solution, which was awarded to Poincaré, although the problem was not solved. Perhaps due to its difficulty the $n$-body problem contributed towards the rise of many different areas of mathematics over the centuries, including calculus (through Newton's work on it), perturbation theory, and chaos.

Frank Morgan has referred to the least perimeter way to divide the plane into unit areas as the "oldest open problem in mathematics", dating back to the first millenium BC, when a Roman soldier wrote about the bees on his farm having solved the way to "enclose the greatest amount of space".

One might consider the least perimeter way of enclosing a single area (circle) or volume (sphere), which maybe be proven using symmetry. The problem becomes more difficult when enclosing more than one area -- the two dimensional solution (a "double bubble") was proven in 1991 by Joel Foisy (then an undergraduate), and a three dimensional version by Hutchings, Morgan, Ritore, and Ros in 2000.

To even define the problem of dividing the plane into unit areas (since both area and perimeter will be infinite), one takes a limit of the ratio of perimeter to area inside a ball as the radius of the ball increases. Thomas Hales proved that the solution was the hexagonal honeycomb in 1999, meaning it took a bit over 2,000 years to solve.

The three dimensional version of this problem is called the Kelvin Problem, and the current best conjecture was used in the design for the aquatics center at the Beijing Olympics.

The square peg problem was posed by Otto Toeplitz over a hundred years ago and is still open; see http://www.ams.org/notices/201404/rnoti-p346.pdf

This involves finding four points on a Jordan curve that form a square.

I do not know if the following might be considered a problem, but certainly it may be called a question. However, even as a question, I do think it is the most ancient interrogative in geometry or, in any case, its philosophical and theoretical bedrock.

What is a (geometric) space?

After all, geometry was born as an attempt to study (from a mathematical point of view) the (physical) space and different mathematical answers to the above (only apparently) innocent question has led (and will probably lead) to the development of different aspects (kinds, if you prefer) of geometry (euclidean geometry, topology, differential geometry, algebraic geometry and so on and so forth). This is why I consider the determination of the notion of a space the archetipical problem in geometry, its inspiring and ultimate goal, its terrific beauty. And, of course, this is a problem which is as open in geometry as the development of geometry is open in Mathematics.

what is the geometry of physical space ?

Sure, we'll find better approximations to this question, but, at a basic level, I doubt this is ever resolved.

Not the answer you're looking for? Browse other questions tagged geometry soft-question math-history open-problem or ask your own question.

153
Slice of pizza with no crust
27
Hexagons are best for tiling 2D space in terms of perimeter vs area. What's best for 3D space?

6
Preferable Order of Mathematics Study
2
What is the most appropriate book for teaching, not the content but skills of mathematics
2
A philosophical question about an hypothetical theorem/equation of everything
40
An invitation to differential geometry?
47
What are some of the Websites/web-tools which must be a part of every mathematician's arsenal?
0
Pseudonyms in mathematics and groups of mathematicians similar to the Bourbaki group.