What is a word to describe curves that have a tangent but are curved away from each other?

I'm writing a description that involves two curves behaving (approximately) as shown below. There aren't actually two intersections: they are mutually tangential. Also, I have many such curves, this is just a characteristic example. Something like $x^2$ and $2x^2$ at the origin is another example. 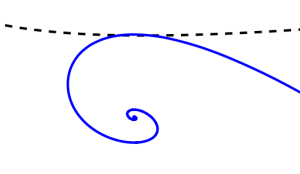 There are two important properties here. The first is that the curves are tangential. i.e. they touch with equal derivatives. The second important feature is that they "move away from each other" on either side of the point where they "touch". So, e.g. if you took the diffence between the two curves (say up is the $y$-axis) then you'd find it is growing.

I had been using the clunky "Curve A is tangential to and curved away from Curve B". Some suggested "Curve A osculates Curve B", but having looked up more about the word osculate, I'm not sure this is right. Although the examples I've seen of osculation would all satisfy my condition, the curve in the picture is not osculation, as I understand...

I did try to dig around for an answer here before asking, but without luck. Apologies if this question is a duplicate. Also, owing to its technical nature, I presume it's better off here than an English Usage SE.

You can read about different orders of contact in this Wikipedia article. For two curves to be osculating, the curvatures at the point of contact are required to coincide. You don't specify the order of "moving away from each other", so your curves could generally be osculating or not. However, in the two examples you give, the image and the case of $x^2$ and $2x^2$, the curvatures of the curves differ, so you could describe these cases by saying that the curves are tangent but not osculating.

Not the answer you're looking for? Browse other questions tagged terminology plane-curves or ask your own question.

4
What is the word for a corollary that follows from a proof?
4
Normalisation of an algebraic curve.
0
Find two planes which are parallel to each other, given that each plane contains a line (just a summary of the question)
1
What is it called when you have two systems of measurement and each scale has two different numbers that can represent the same thing?
0
If I subtract a number (from a sequence) from the average of all the numbers in that sequence - what do I have?
3
What is the mathematical word to describe when two objects can be transformed to each other like Klein bottle and torus?
2
If two closed plane curves are outside each other, can there be a point inside both of them?
2
When two curves touch each other at a single point, are they called intersecting?