How can you explain implicit differentiation?

So I am taking calculus 1 online from a local college (bad idea, but the only thing that fit my schedule).

The professor used the notation $f'(x) =$ for EVERY function up until two weeks ago. All of the sudden he changed his notation to d/d$x$, d$y$/d$x$ and hasn't been able to explain it clearly enough via videos.

I am trying hard to learn how implicit differentiation works, and I've been putting in six hours per day of studying for two weeks. I just don't get it. I have read and tried the examples on MIT opencourseware, our textbook and calculus for dummies.

What is this d/d$x$ that gets placed everywhere? Where do you place it? Why use it? Same with $\text{d}y/\text{d}x$.

I've had lots of success here, so if someone could show me how to do this i would really appreciate it. This is my last hope :)

To answer your first question,

For the next question,

implicit differentiation is used when it is not necessarily easier to simplify the equation first. However, we can differentiate the equation implicitly and then solve for the derivative. For an easy example:

Here the function $y$ is actually a function dependent on $x$. So we would formally write $y(x)$.

So, when we take the derivative we can simply use product rule!

And then differentiate all other terms with respect to $x$.

Hopefully this cleared some things up.

If you think of the $d$ in $dx$ as shorthand for "difference", then you immediately see that $df/dx$ is a very suggestive notation for $f'(x)$. 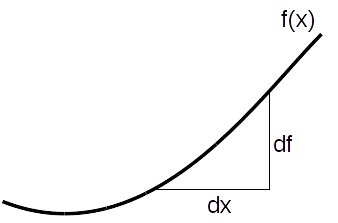 Now, what about implicit differentiation? Even though $df/dx$ is not a real fraction, just a good notation, pertending it is a fraction leads to the law of implicit differentiation: $$\frac{df}{dx}=\frac{df}{dy}\frac{dy}{dx}$$ Or in our older notation: $$f'\left(y(x)\right) \text{(derivative acc. to $x$)}=f'(y) y'(x)$$ Now you see the strength of the $df/dx$ notation - there is no confusion about what variable the function is being derived by.

This question is several years old, but calculus notation can be confusing to newcomers and I thought a layman's non-technical explanation might be useful for some readers.

Obviously, you would want to say something about the derivative with respect to $x$ of the function $f(x)$. So you might complete the mathematical statement like so:

So, in response to one of Andrew's questions above (contained in a comment) "how do I know where to put the $d \over dx$?", the answer is, you put it wherever you intend to say "the derivative of ... ". For example, to express mathematically that the derivative of $x^3 - 5x$ is $3x^2-5$, you might write:

The same thing could be expressed as

Also, referring to Eoin's answer above where Eoin showed

Now consider the symbol $dy \over dx$. As noted above (with parentheses), this symbol refers to "the derivative of $y$ with respect to $x$." It is interesting that in calculus you learn to "solve for functions" just as you have solved for variables in the past.

(The first line gives the equation to be differentiated. The second line says that I am going to differentiate both sides. The third line actually performs the differentiation.) In this case, you probably don't yet know the rate of change of the area (i.e., $dA \over dt$), or the rate of change of radius (i.e., $dr \over dt$) but that does not stop you from representing those values with a symbol. You also could simplify the notation somewhat if you chose to do so - something like this, perhaps:

I hope that helps clarify some of the notation for students new to calculus.

Usage has enforced the notation

Some will claim that $dx$ is an "infinitesimal quantity", but this is not true with the modern definition of the differential.

Not the answer you're looking for? Browse other questions tagged calculus integration derivatives implicit-differentiation or ask your own question.