Motivation behind definition of homologous cycles

Two cycles are said to be homologous if their difference is a boundary (usual meanings implied).

What is the motivation behind this definition or the intuitive meaning it carries?

I am looking of something along the line of definition of homotopic curves, that they are curves which can be continuously deformed into one another.

Or may be if such a simple explanation isn't possible, what developments led to this particular definition, and what geometric properties of the topological space and homeomorphisms does it state.

Diagrams will be exceptionally helpful if possible.

As mentioned by @RyanBudney, homology between cycles is like a PL version of cobordism between manifolds inside an ambient space. Cobordism just like homotopy, but continuous deformation of one submanifold to another instead of just loops.

(note : I have added hover texts with the pictures, please place your mouse point over the pictures to see the corresponding texts explaining them) 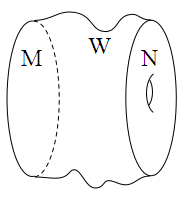 If $X$ is a simplicial/delta-complex, $\xi$ a simplicial $n$-cycle. Then $\xi$ can be thought, roughly, as a subcomplex of $X$ (by realizing each simplex in the formal linear combination as a simplex of the subcomplex, with products $n \cdot \Delta^i$ thought as an $i$-simplex thickened by a factor of $n$) with no boundary (i.e., no "open edges"). $\xi'$ be another $n$-cycle, realized as a subcomplex-ish thing.

Indeed, more formally, if we work in the singular context, then an $n$-cycle $\xi$ can be realized as a map $\xi : K_\xi \to X$ as follows: realize $\xi$ as the formal linear combination $\sum_i \varepsilon_i e^i$ where $e^i$ are singular $n$-simplices and $\epsilon_i$ are $\pm 1$ (repeatation is allowed in the sum). Glue $n$-simplices appropriately according to how pair of singular $(n-1)$-simplices cancel in $\partial \xi = 0$ (there is a little subtlety here, but let's ignore that for now). We get the delta complex $K_\xi$ and the map $K_\xi \to X$ is obtained from sending each simplex to $X$ by the singular simplices $e^i : \Delta^i \to X$.

So homology between cycles in $X$ is merely (sort-of-)cobordism between simplicial complexes inside the ambient space $X$.