Constructing a family of distinct curves with identical area and perimeter

Two recent questions were posed by Arjuba [1] [2] asking for counter-examples regarding whether two different figures could have the same perimeter and area. Responders quickly raised a number of such examples.

However, all were of the form of polygons rather than smooth curves. This doesn't pose any obvious conceptual obstacle, since one can certainly construct such a counter-example by a limiting process. But what I would be interested in seeing a construction for is a continuous family of smooth curves, all with identical area and perimeter. (A family of algebraic curves would be my preference). Are there well-known examples of such?

EDIT) To clarify my intent: What I really want is a continuous family of curves, either parameterized explicitly or given implicitly as an algebraic curve, which have the desired property.

EDIT 2) I've asked another question which suggests/ requests consultation on a possible variational strategy to finding examples with more smoothness. 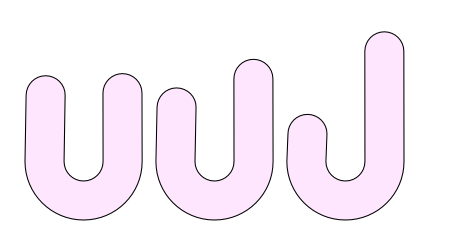 (The following example avoids piecewise definitions; but there is nothing "special" about it.) 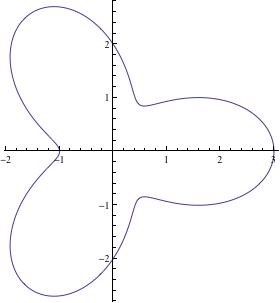 EDIT from String. This is such a great answer, so I decided that it should have an animation of its own:

I approximated $a$ and $b$ by iterating linearly solving the system of equations defined by the Jacobian. Three such linear steps were taken for each $c\in[-0.7,0.7]$ (by steps of $0.01$). For $c$'s of numerical value greater than about $1$ it appears that the system is still solvable, but the pertubation begins to intersect itself via loops so then it has no relevance to the problem in question.

@Christian Blatter: I hope you don't mind this edit - otherwise we can just delete it again!

Though still not satisfying the OP's desire for smoothness of higher degree, the following construction turned out to be simpler than my initial analysis had predicted:

All of these curves have the same area and perimeter and are also smooth (though they are technically piecewise-defined).

Note: I'm not trying for the bounty, I'm just having trouble putting the problem down.

Only two curves, rather than a family, and one of them is piecewise-defined, but I thought people might be able to use them as fuel for doing something better: 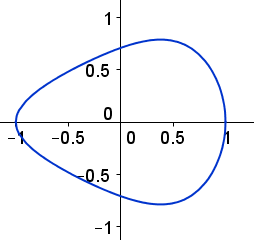 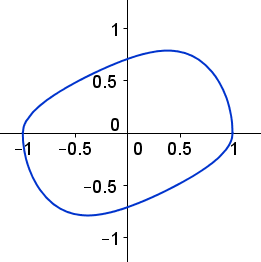 The idea was that if I had a curve with an implicit function, which was asymmetric, I could cut it in half and turn one half around to get a different shape with the same perimeter and area.

I realised that if the only x-term not attached to a y was x^2, and the constant was 1, then the curve would cut the x-axis at 1 and -1.

I also realised that in order to "cut and flip" I would need the tangents at those two points to be vertical. In order to do that, the y-derivative of the function at those points would need to be zero, which could be achieved if the only terms with $y$ had at least a power of 2.

Playing around with Geogebra I found this example. It gives me hope that there is actually a nice example with two implicit curves.

Take your favorite family of smooth Jordan curves parametrized by $\lambda>1$ say, for example $x^\lambda+y^\lambda=1$. These all bound area between 2 and 4. Scale them to unit area by an appropriate factor depending on $\lambda$. The resulting curves don't have the same perimeter, but notice that each perimeter is less than 8, say. Now apply affine transformations of the form $\pmatrix{\mu & 0\\0 &\mu^{-1}}$. As $\mu$ tends to infinity the perimeter does also, so by the intermediate value theorem there is a $\mu=\mu(\lambda)$ making all perimeters equal to 8, yielding the desired family.

One can't do this with conic sections because there is not enough room, but cubic curves are enough; start for example with small perturbations of the circle: $x^2+y^2+\epsilon x^3=1$ with small $\epsilon$. These are algebraic and therefore analytic.

To make the examples more explicit, one needs to overcome the problem of the computation of arclength which typically leads to unmanageable integrals. Perhaps this is more tractable in polar coordinates where one can start with $r^2+\epsilon \sin\theta=1$ and hope for the best.

It will not be easy to come up with a "natural" explicit example, since you need a two-parameter family of curves whose lengths you can compute in an elementary way.

The following example is not very sophisticated, but does the job:

Not the answer you're looking for? Browse other questions tagged analytic-geometry examples-counterexamples plane-curves or ask your own question.

20
Polygons with equal area and perimeter but different number of sides?
14
Families of Idempotent $3\times 3$ Matrices
4
Is there any theorem about figures of equal area and perimeter being congruent?
4
Nontrivial solutions of $\sum\limits_{-\infty}^\infty\overline{a_n}a_{n+k}=\delta_{k0}$
3
A variational strategy for finding a family of curves?
2
Tractable indefinite integral of the exponentiation of some function

2
How to draw a family of curves and its envelope?
1
Area Between Curves
1
Finding the orthogonal family of curves to a given family of curves. I am missing some.
20
Polygons with equal area and perimeter but different number of sides?
2
Intersection numbers of plane curves - constructing a counterexample.
1
Perimeter and area of hyperbolic octagon