Polygons with equal area and perimeter but different number of sides?

Let's say we have two polygons with different numbers of sides. They can be any sort of shape, but they have to have the same area, and perimeter.

There could be such possibilities, but can someone show me with pictures? I just need visualize it.

Sometimes in life you just have to know it, and sometimes we need a picture shown in our faces :).

Edit: I like the above figures because they're easy to generalize to many sides. But if it's unclear that they have the same area, here's another pair: the L and T tetrominoes.

You can imagine sliding the square on the right side up and down relative to the 1x3 bar on the left side; this operation preserves both area and perimeter. Explicitly, both tetrominoes have area 4 and perimeter 10. The L has 6 sides, and the T has 8 sides.

For any triangle there is a rectangle with the same area and perimeter.

We can then proceed to make the square into a rectangle, making the area smaller and smaller preserving the perimeter. Until the area is as small as the triangle's.

This the first example that came to my mind, using four identical $45-45-90$ triangles. 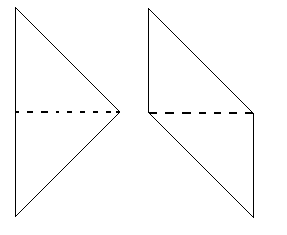 Take a polygon and choose a line segment between two points on the perimeter that is fully contained inside the polygon.

Separate the polygon along this line segment to produce two polygons. Be sure to distinguish the "exposed cut edge".

This will produce a polygon with the same area and same perimeter as the original polygon.

rschwieb's answer is an example of this method.

Cut the polygon in two as described above. Flip one part. Join the two exposed cut edges.

Unless the part flipped was symmetric, you will have made a new polygon (as opposed to simply restoring the original polygon). If at least one end of the line segment is not at a vertex, then you will also change the number of sides.

The simplest example is an isosceles triangle and a parallelogram:

However you can start with any triangle and progressively make shapes with more and more sides:

Here are Gordon–Webb–Wolpert polygons, they have more than just common area and perimeter, they are isospectral! Drums shaped as them would sound the same. It's a fun exercise to construct more examples using tangram pieces.

More isospectral polygons can be found here, including ones with different numbers of sides.

You can make a hexagon and a pentagon with the same area and perimeter by gluing triangles to a square: 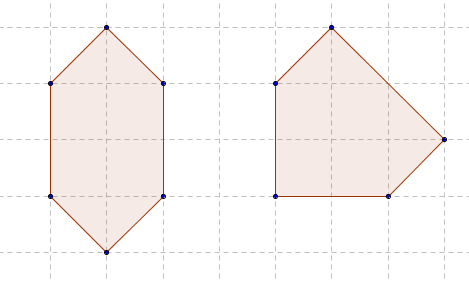 The area of both is $6$ units$^2$ and the perimeter of both is $4 + 4\sqrt2$ units. It's particularly pleasant that both shapes are convex.

(Note also that these two are related by a "cut and flip" as described in my other answer.)

This may be cheating a bit, but why not just create two polygons that "look the same" but have a different graph? For example, we may take a triangle and insert a new vertex somewhere in one of its edges. This produces a new polygon that looks like that triangle, but is actually a rectangle quadrilateral with three collinear vertices.

Not the answer you're looking for? Browse other questions tagged geometry examples-counterexamples polygons or ask your own question.

8
How is it that this shape can converge to what looks like a triangle but has a different perimeter?
5
Given a polygon of n-sides, why does the regular one (i.e. all sides equal) enclose the greatest area given a constant perimeter?
6
Why, intuitively, do different shapes with the same surface area have different volumes?
1
Question involving area and perimeter of two parallelograms sharing a diagonal.
9
Can two figures (of any kind, bounded by curves or not) have the same area and perimeter, but different shapes?
1
Can $\pi$ be approximated by considering polygons with increasing number of sides, but without using circles or trigonometry?