I believe this utilizes the washer method, but I'm not completely familiar. My first thought is to consider the region with the space between the region and the revolution axis included and perform the method of disks. Then I will subtract the volume found from disk method of this additional region.

Can someone steer me in the right direction? 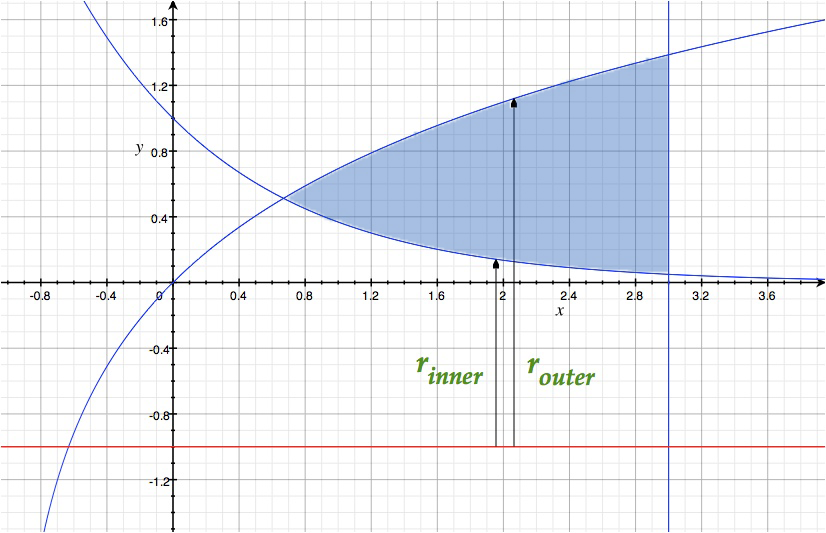 Since "washers" are "slices" with radii perpendicular to the axis of revolution, the "thickness" of the slices will be along that axis, which will be $ \ dx \ $ here. The direction of integration will also be along the $ \ x-$ direction. So your volume integral is

with the radii being functions of $ \ x \ $ . You are told that you can end the integration at $ \ x \ = \ 3 \ $ . You will need to solve for the intersection point between the curves to find where the integration begins.

I should say that you will need to know how to integrate by parts to calculate one of the terms if you do the "washer" method, but the integration can be done in one pass. For the "shell" method, you will need to construct two integrals along the $ \ y-$ direction after inverting both functions, one integral to run from the exponential (now logarithmic) curve up to the line $ \ x \ = \ 3 \ $ , then a second from the logarithmic (now exponential) curve out to $ \ x \ = \ 3 \ $ . You will also have two additional intersection points to determine, and will also still need to know how to integrate functions with logarithmic factors.