Parametrizing Walks on Sphere and Torus

This question is very underdeveloped, but I was wondering if there was a map from the sphere to the torus which preserves length of closed curves? I was just thinking about taking a walk on a sphere and coming back to my starting point. Could I possibly parametrize a similar walk on the torus having the same length. I tried to get a better understanding of this question by making deforming the sphere until it was almost identical to the torus, topologically of course, but since the torus in genus-1 there is only but so much I can do. 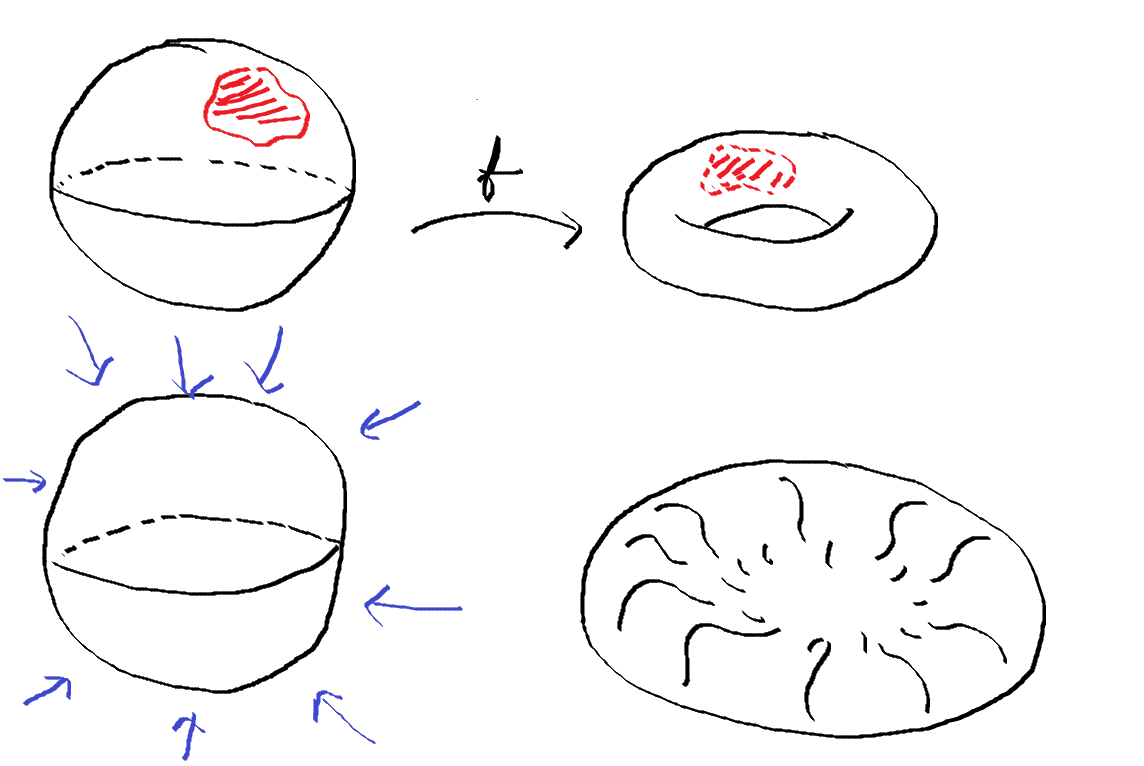 It is quite amazing but such maps do exist!

Call a map between two metric spaces (say, Riemannian manifolds) $f: M\to N$ a path-isometry if it preserves lengths of all paths. Recall that if $p: [a,b]\to M$ is a path (say, Lipschitz-continuous), then its length is defined as $$ \int_a^b |p'(t)|dt. $$

This map is not a homeomorphism even locally, but it preserves lengths of paths (since the derivative of $f$ has absolute value $1$ a.e.). Of course, $f$ is not $C^1$ but merely Lipschitz, but that's the natural regularity condition since all path-isometries are 1-Lipschitz.

M.Gromov in his book "Partial Differential Relations" proved the following amazing theorem (see 2.4.11 in the book):

Theorem. For every Riemannian surface $M$ there exists a path-isometry $f: M\to R^2$ (where $R^2$ is equipped with the standard flat metric).

Gromov proved much more, but the above theorem is enough for us.

Edit. Suppose you want to impose an extra regularity assumption on your maps, namely, $f\in C^1$ (continuously differentiable). Then one can verify that all $C^1$-smooth path-isometries are actually Riemannian isometries in the sense that the derivative $df: TM\to TN$ preserves lengths of tangent vectors. In particular, such $f$ is an immersion: $df_m: T_mM\to T_{f(m)}N$ is injective for all $m\in M$.

Then one observes that an immersion $f: S^2\to T^2$ do not exist. One can either prove it by verifying that such $f$ would have to be a covering map (and the sphere does not cover the torus) or simply take a nowhere vanishing vector field $X$ on $T^2$ and take its pull-back $Y=f^*(X)$ under $f$:

Then $Y$ would be a nowhere vanishing vector field on $S^2$, which contradicts the Hairy Ball theorem.

Not the answer you're looking for? Browse other questions tagged soft-question differential-topology or ask your own question.

5
Algebraic Link/Knot not of the Torus Type
11
What role does differentiability play in Topology?
9
Mathematicians who started late, similar to my situation?
0
Hairy Ball Theorem: conceptual difficulty
1
compute genus of sphere and torus
1
Should I focus more on the concepts or on the calculations?