Multiple points on an elliptic curve 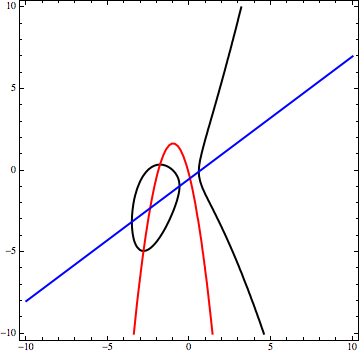 Could you please tell me, if my reasoning below is correct?

I have learned that a point p on a curve (i.e. $F(p) = 0$) is a multiple point if it is also a zero of all the first partial derivatives $F_X, F_Y$ and $F_Z$ of the homogenized equation $F(X,Y,Z)$. Now by looking at the graph we see that there is no point on the curve $F$ which is a zero of both $F_X$ and $F_Y$, because there is no point at which the three graphs $F$, $F_X$ and $F_Y$ intersect. It remains to check the points at infinity.

Just to say that by referring to $F$ as an elliptic curve, you are implicitly assuming that it's smooth as this forms part of the definition.

But yes! This gives a necessary and sufficient criterion for $F$ to have an affine singular point.

Not the answer you're looking for? Browse other questions tagged elliptic-curves or ask your own question.

3
$j$-invariant for a singular curve
3
admissible change of variables on elliptic curve
2
Clarification of the proof of **Proposition 1.5** in Silverman
3
Elliptic Curve in Weierstrass Form
1
Elliptic curve point at infinity
2
how to calculate the order of elliptic curves?
4
Finding integral points on an elliptic $y^2-3y=x^3+x^2$ curve using the LMFDB-database