Asymptotically, how many random students do I have to mark before I've marked two consecutive students

The motivtion for this question comes from observations made by a colleague while he was marking homework and recording the marks this year.

His procedure for recording the marks is as follows. The homework is placed into his folder by students before the deadline, (presumably) in a 'random' order. Once the deadline passes, he collects the folder, and starts marking. He takes the first script from the folder, marks it and records the mark on the mark-sheet. Then he takes the next script, marks it and records it. And so on...

Whilst doing this, he noticed that one would surprisingly quickly have entered marks for two consecutive students on the list. For example, in a class of 20 students, it only took 4 or 5 scripts on average.

This prompted some questions from him on the distribution of this number:

Let's phrase the problem a bit more precisely, so I can explain what we've succeeded in doing.

Suppose you have a line of $ N $ boxes, all initially unfilled. Select uniformly at random an unfilled box, and fill it in. Repeat this until two consecutive boxes have been filled in, then stop. (The boxes form a line, and do not wrap around, so the two end boxes are not considered consecutive.) The value of the discrete random variable $ X_N $ is then the number of filled in boxes.

In particular we are now looking for

Example: When $ N = 3 $, there possible ways to terminate with two consecutive boxes are

I have managed to give an explicit (though unpleasant) formula for $ E(X_N) $. Roughly this is by analysing how the process can terminate with $ n+1 $ boxes filled, looking at the configuration one step before the end, and breaking this up into various types. (No ends filled, one end filled, both ends filled and various numbers, $ k $, of 'triples' like $ \blacksquare \square \blacksquare $.) I can then count the number of each type of configuration using standard combinatorial techniques, and then work out the probability of ending with $ n+1 $ boxes filled. I get:

and similarly I can get the variance. (You can still see something of my approach reflected in the structure of the formula.)

From here, we can compute the first thousand or so values of $ E(X_N) $, to get a feeling for the behaivour at large $ N $. The result is as follows: 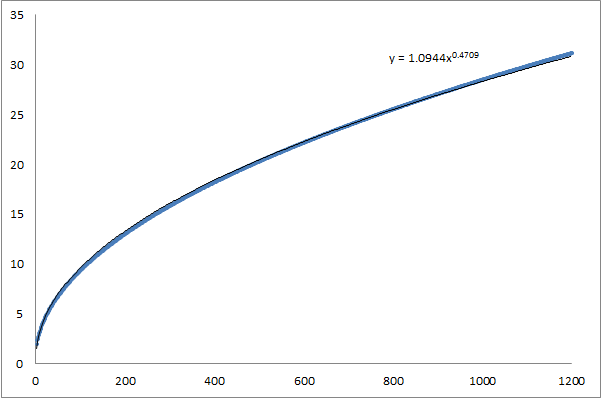 My specific questions about this problem are:

Lastly, (though I'm not expecting anywhere near a complete answer) how does all of this generalise to more complicated arrangements of boxes?

That gives a nice recurrence formula to compute everything easily :

Now, using equation 1, and stirling approximation, you can show that

Finally, for the grid question, it seems to be an open question related to the Hard Square Entropy

The derivation for $\mathbb{E}\left(X_n\right)$ can be made simpler.

Let's think of getting the probability of having exactly two adjacent boxes filled, from a row $n$ boxes when $k$ boxes are filled, which can be done in the following manner:

First, we need to obtain the number of ways of filling $k$ boxes such no two adjacent boxes are filled, which turns out to be $\binom{n-k+1}{k}$ ways.

Therefore, the probability that there is exactly one adjacent pair of boxes which is filled, when $k$ boxes are filled among $n$ boxes:

I may not be able to answer your other questions for now, but I believe the above formula may make it easier.

Not the answer you're looking for? Browse other questions tagged probability asymptotics or ask your own question.

31
What is the expected number of steps in the following process?
5
How find this sum $\sum_{k=0}^{n}\binom{n}{k}|n-2k|$ closed form or asymptotic behaviour?
2
Expected position of a random walk with a biased coin directly after two consecutive heads are observed
4
Integer solutions question simple
2
Estimate asymptotic behaviour by looking on ordinary generating function
1
How many students are in the class if there are $40$% more girls than boys and...
11
What is the asymptotic expansion of $x_n$ where $x_{n+1} = x_n+1/x_n$?
0
Coefficient of $1$ in the expansion of $\left(1+x+\frac{1}{x}\right)^n$