Coming from the geometric point of view, the determinant of an $n \times n$-Matrix computes the volume of an parallelepiped spanned by the columns of the matrix.

In context of this question, let the determinant be defined by Laplace's formula and let us assume that we use the Laplace expansion along the first column of the matrix.

Why determinant of a 2 by 2 matrix is the area of a parallelogram?

I tried to give an geometric sense to this calculations mimicking what was done in Golomb's figure but I failed. Sure, there is a way to rearrange the three sets to conclude that actually the volume of the parallelepiped was computed but again I would not understand why.

Is the anyone who knows a way to interprete Laplace's formula geometrically? I think there might be a way which uses the projections of the parallelogram which I mentioned above...

I would be very thankful for all other (geometric) interpretations, too!

Let's have a little lesson on determinants and why they correspond to volumes in the first place.

Exterior and Clifford algebra: algebras of planes, volumes, and other interesting subspaces

You might have realized that conventional linear algebra--the algebra of directions, as it were--is somewhat inadequate for talking about planes, volumes, and the like. These are interesting geometric objects, but they do not correspond to vectors in vector algebra. Conventional approaches devise some clever ways around this problem: they use normal vectors for planes in 3d, for instance, but this doesn't generalize.

An algebraic solution to this issue is to use something that builds up from vector algebra. Clifford algebra is a good choice: compared to vector algebra, the extra stuff you need is pretty minimal.

Now, you might realize that it's clumsy to have to deal with only orthogonal or parallel vectors. Given two vectors $c, d$ that are neither parallel nor orthogonal, you can break down the geometric product like so:

The dot and wedge used here are traditional. And they make sense for general blades. Let $B$ be some general $k$-blade. Then the expression

has a similar meaning: there are two well-defined parts of the product from looking at the projection of $c$ onto $B$ and the "rejection" of $c$ that is perpendicular to $B$. Note, however, that if $B$ is a $k$-dimensional subspace, a $k$-blade, then $c \cdot B$ is not a scalar. Rather, $c \cdot B$ is a $k-1$-dimensional subspace, and $c \wedge B$ is $k+1$ dimensional. Think about how this worked for the vector-vector case if that doesn't make sense.

Now, if you wanted to build up a parallelpiped from three vectors, you could wedge them together like so:

The relationship with linear algebra: the geometric interpretation of determinant

The role of determinants here is somewhat misunderstood. Traditional linear algebra doesn't really explain it as well as clifford algebra can.

Given a linear operator $\underline T$, which we often represent with a matrix with respect to some basis*, there is a natural extension of that linear operator to blades. In paritcular, consider the definition

Indeed, this gives a nice, geometric definition of the determinant that can be understood with the machinery of the clifford algebra:

So the determinant becomes understood as an eigenvalue, the eigenvalue of any $n$-blade.

But this relationship has often been understood the wrong way around: because the determinant gives us a way to measure a given $n$-blade with respect to a reference $n$-blade (in this case, $i$), people often build up linear operators from the $n$ linearly independent vectors that they want to build up a (hyper-)parallelepiped from, and then they take a determinant to find the size of that parallelepiped. This is very backwards; the clifford algebra gives a direct way to do that with algebraic operations. Namely, if $I$ is the $n$-blade you want to consider and $i$ is the reference $n$-blade you want to use to measure its size against, just take

This is a nice, well-defined quantity.

So in fact, the relationship to determinants here is somewhat incidental. We really want to understand, geometrically, how to calculate the magnitude of an $n$-blade.

Again, the geoemtric product gives an obvious interpretation. Given a wedge product of $n$-vectors, we can rewrite that product as a geometric product using rejections. Again, remember this example:

You could write that in terms of a unit 3-blade $i$ and some trig functions:

But your question was specifically about the Laplace expansion. Well, let me consider an explicit calculation of one of these wedge products:

It should be understood, then, when Laplace expansion is invoked, we're explicitly doing the calculation of taking the vector we expanded along and, in essence, finding the rejection of that vector onto the $n-1$-dimensional subspace formed by the other vectors in the matrix (rejection = part perpendicular to that subspace). We're finding the "height" of the parallelepiped with respect to a certain base. And the whole process of finding a determinant here is just repeatedly finding heights, and then the corresponding areas or volumes that those heights help form. 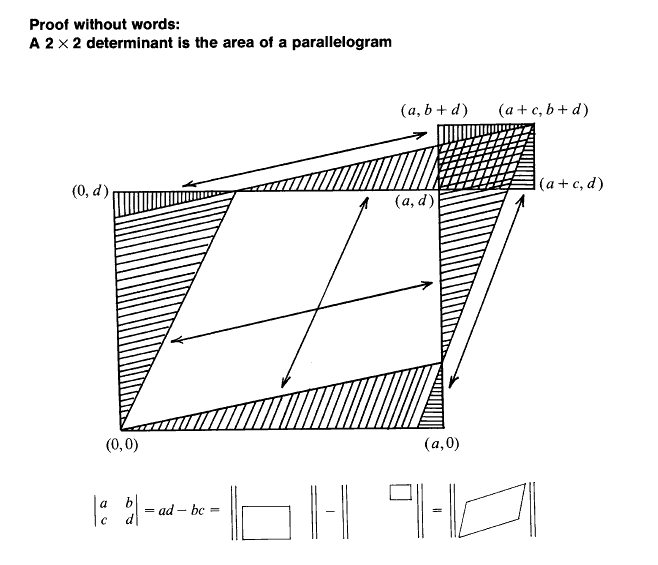 It is elegant to interpret this in light of this tiling-based proof of the Pythagorean theorem.

So we have a picture which provides an interpretation for each term for Leibniz's formula for $2 \times 2$ determinants.

To get an interpretation of Leibniz's formula, we can repeat this with each of our three tiling elements, with $\vec v$ and then $\vec w$ playing the role of $\vec u$. We triple the number of tiling elements each time. So this gives us a $\Lambda$-periodic tiling with $27$ axis-aligned bricks, only six of which are nondegenerate, corresponding to the six terms of Leibniz's formula.

However, visualizing the process step by step is tedious and unsatisfactory. It's more instructive to work out what the end result is in one stroke.

Then roughly speaking $\tilde \phi$ is a "crinkly" piecewise axis-aligned parametrization of $\mathbb R^n$. It hits some points several times, but generic points are hit a total of once if you count being hit by a negatively-oriented piece as being hit $-1$ times.

This gives us a $\Lambda$-periodic tiling of $\mathbb R^n$ which hits each point a (signed) total of once, with each period made up of $n^n$ tiles, of which only $n!$ are nondegenerate. The total signed volume of the tiles in each period is

Since we can also $\Lambda$-periodically tile $\mathbb R^n$ with translates of the parallelepiped $P$, we have

The two answers above are excellent, and far beyond what I could hope to produce, but here's the "Laplace expansion of the determinant for dummies" version.

There are usually two starting definitions for the determinant:

The first definition is in my opinion the more natural way (certainly easier to think about, at least!). However, the second definition is useful because of the properties it states about the determinant. The two definitions are equivalent (one implies the other and vice-versa), but let's just see why the first implies the second.

First of all, a linear form is a linear map from a vector space to its underlying field (the field is the mathematical structure from which the coefficients come from). It only takes one vector as an argument. If we generalize this idea to more than one vector as input, with the function being linear in every argument, then we get what is called a multilinear form: takes in several vectors, outputs something from the underlying field (e.g. a real number) and is linear in every argument.

Adding the designation "alternating" before "multilinear form" also has multiple equivalent definitions, but the one which is interesting here is that inverting two vector arguments of a multilinear form makes it switch signs (e.g. $f(v_2, v_1) = -f(v_1, v_2)$).

Volume is multilinear: scaling one side of a parallelotope scales its volume by the same factor (try drawing a parallelogram or a parallelepiped and scaling one of its sides to see!). The volume obtained when adding a vector to one of its vectors is the same as the sum of volumes with the two vectors separate.

Signed volume is also alternating (that's what we mean by "signed").

One more property is necessary before illustrating the Laplace expansion: signed volume is invariant under shearing. A simple way to define shearing is as adding one of the arguments, scaled, to another argument: $\text{det}(v_1, v_2, v_3) = \text{det}(v_1, v_2 + \lambda v_1, v_3)$. Once again, to convince yourself, it's pretty useful to draw a parallelogram and try shearing it: in 2D, shearing doesn't change the height, and remember, the area of a parallelogram in 2D is the base times the height!

Finally, we can try to find out how the Laplace expansion works in 3D. We have the three properties we will need: the determinant is multilinear, alternating, and invariant under shearing. Usually, a matrix is considered to be a bunch of column vectors stuck together, but without loss of generality we can also consider it to be a bunch of row vectors, as this makes it visually a bit more similar to Gaussian elimination (a nice bonus to understand the link between the two!).

Here, we made use of the multilinearity of the determinant.

This time, we used the invariance of the determinant under skew to eliminate the first component of the second and third vectors.

Finally, we noticed two things. First, having two coplanar vectors and one orthonormal vector means the volume is just that of the parallelogram spanned by the two colinear vectors. Second, to have positive sign for the determinant, $(0, 1, 0)$ should be on the second row instead of the first, which you can achieve with one transposition of the the first and second rows, so the second term has a negative sign. Same goes for $(0, 0, 1)$, which should be on the third row, which you can achieve with two transpositions to preserve the ordering of the second and third rows, so its sign is positive.

Not the answer you're looking for? Browse other questions tagged linear-algebra geometry differential-geometry or ask your own question.

94
What is the most elegant proof of the Pythagorean theorem?
76
Why determinant of a 2 by 2 matrix is the area of a parallelogram?
7
Geometric proof/evidence for the 3x3 matrix determinant's formula?
1
Intuition of finding the formula of Laplace's expansions of the Determinant?
0
Determinant as sum of cofactors