How can I calculate the derivative of a Catmull-Rom spline with nonuniform parameterization?

Allow me to preface this by saying I am not a trained mathematician in any sense, so it's entirely possible I'm missing something rather fundamental. That said, I'm trying to take the derivative of a centripetal or chordal Catmull-Rom spline. Using the uniform equation calculating the tangents for the control points as well as the derivative is very simple. But when you want to make a spline with nonuniform $t$ values, you have to go through this:

Arrows indicate that you multiply by the coefficient and add to the adjacent to form the next coefficient up in the pyramid. When you get up to $C$ you have your coordinate on the curve. $P$ values are your control points and $t$ values are calculated with the following: 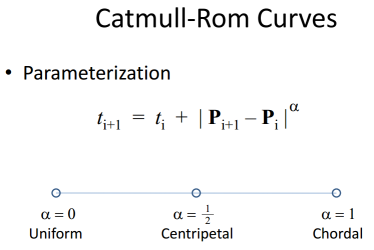 If I'm just plugging values into $t$ then I can get the curve coordinates, but I need the derivative to do some other calculations. I tried to expand the entire thing manually and take the derivative at $t_1$ and $t_2$, but it was a mess, and I think I did it completely wrong, so I ask here. Looking at the answer here, this person claims to have done it and got these very simple formulas, but the only methodology listed is "mathematica."

How can I get a usable, general derivative? Is it necessary to choose an alpha value beforehand, or can it be done easily without choosing a parameterization type?

Images in this question were borrowed from an answer here.

The linked answer from eriatarka84 essentially gives you the equation of the curve. Then you just have to differentiate this equation to get the first derivative vector as a function of $t$.

If you really want to simplify the formulae, and you're not adept at algebraic manipulation, you ought to use a computer algebra system. There are some free ones available.

Denis Kovacs wrote about finding the derivatives here: http://denkovacs.com/2016/02/catmull-rom-spline-derivatives/. He even provides a Matlab code to compute the spline and its derivatives.

Please see his site, here I just quote the solution:

You can use the same pyramid structure to evaluate the tangent C′(t) as well:

P.S. A and B are the same as your L's were A is the 2nd level and B the 3rd level of the pyramid, see the wiki.

Not the answer you're looking for? Browse other questions tagged derivatives numerical-methods recursive-algorithms spline or ask your own question.

1
How do I interpolate the derivative of a catmull-rom spline?
3
Bounding volume of catmull-rom splines
1
Tangent at middle vertex of 3 vertices
1
C2 continuous interpolation on a 4-dimensional dataset
3
B-Spline approximation deviates a lot while increasing the number of control points???
2
How to make a closed interpolating B-spline smooth at the joining point.
0
Normal of Catmull-Rom Spline