A binary sequence is a sequence of 1s and 0s, and there are $2^n$ such sequences of length $n$.

So, the question is: for binary sequence with length $n$, how many patterns are there? Denoted by $a_n$.

It seems to be related to the Fibonacci numbers. If true, please help to prove it.

First of all, note the following formula for the sum of the first n fibonacci numbers:

This can be seen easily by induction on n.

Each pattern that begins with say 3 can be uniquely identified with a sequence that starts with $1110$. Number of such sequences = $a_{n-4}$.

Now, each of the cases we have found so far are disjoint from each other. We can add them up.

By induction hypothesis, this becomes:

(by the formula for sum of first n fibonacci numbers).

For those who may concern, here are some additional notes on the problem.

Let's have a close look at the $ 2^n $ sequences of length n. If we shrink the extra zeros out of each sequence, resulting in sequences containing no two consecutive zeros nor zeros at both the left and right ends, just like what Christian's answer suggested, then we have a shrinked version (denoted by $SS_n$) of the original $S_n$. Each item in $SS_n$ represents a unique pattern. The length of $SS_n$ is the total count of unique patterns, the final answer.

Here is another perspective on the initial question using Pascal Triangle. $s_n$ is the sums of its "shallow" diagonals. 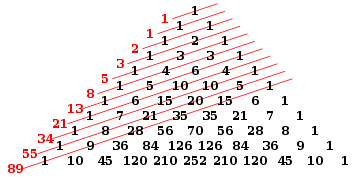 $P_i$, the sum of row $i$ of Pascal Triangle, is the number of unique patterns of sequences with $i$ 1's totally, given enough sequence length. It is also the number of compositions of integer $i$. And $P_i=2^{i-1}$

Now, back to the "shallow" diagonals, every time when the sequence length $n$ increase into $n+1$, new oppotunities open for $P_{i,j}$s which were not counted in $a_n$ because there were not enough length to expand (i.e. adding 0's). These $P_{i,j}$ items compose the $i$th "shallow" diagonal.

Not the answer you're looking for? Browse other questions tagged sequences-and-series combinatorics or ask your own question.