Linearization of a product of two decision variables

I am trying to solve a problem that involves constraints in which products of two decision variables appear. So far, I read that such products can be reformulated to a difference of two quadratic terms:

As stated in "Model building in mathematical programming" by H.P. Williams, I tried to linearize $y_1^2$ and $y_2^2$ by piecewise approximation. When I only use two node points (one interval) for the piecewise approximation, my solvers (Gurobi 5.6.3 and CPLEX 12.5.1) are able to solve the problem, but when I introduce more node points, both conclude that the problem becomes infeasible.

I already tried SOS2 variables as well as a binary approach for the linearization of $y_1^2$ and $y_2^2$.

I also used Taylor series to directly approximate $x_1\cdot x_2$ which resulted in similar results as the approximation using two node points. Since this method succeeded, I suppose that the rest of my model is feasible and only this product makes things complicated.

So my questions are:

The AIMMS Modelling Guide in section 7.7 provides the following hint for bounded variables: 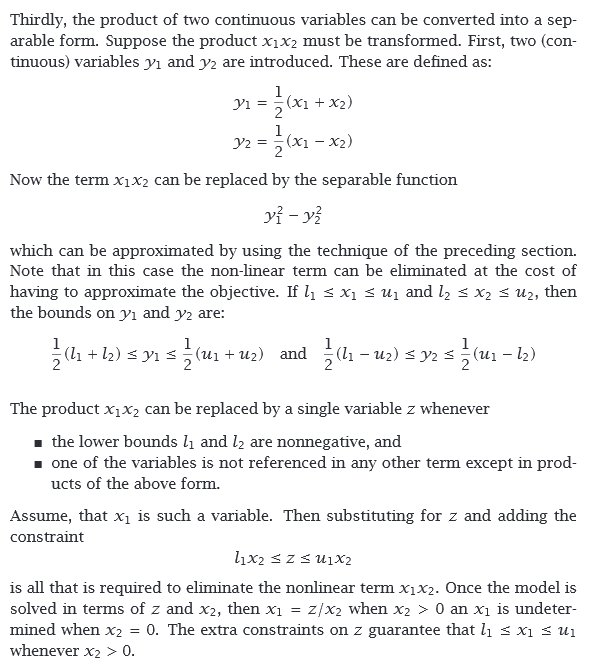 Have a look at this paper. This article introduces 10 methods for your problem. on page 5, the authors introduce SOS procedure for bilinear terms.

Not the answer you're looking for? Browse other questions tagged optimization linear-programming nonlinear-optimization or ask your own question.

3
Finding the max/min distance from an ellipse to a line (Lagrange Multiplier Method)
1
How to test if a feasible solution is optimal - Complementary Slackness Theorem - Linear Programming
0
How to solve this convex optimization problem with inequalities constraint?
0
Utilizing theorems of duality to solve primal linear programming problem
0
Linear programming (apply different multipliers for negative values )
1
How to minimize $\frac{1}{y_1} + \frac{1}{y_2} + \cdots + \frac{1}{y_k}$ subject to $y_1+y_2+ \cdots + y_k = a$?