Connected sum in an ambient space

Let $M$ be a smooth c connected $m$-manifold, $N_1$, $N_2$ two smooth disjoint connected $n$-submanifolds with boundary, both contained in the interior of $M$ (if necessary). Assume that $M\setminus (N_1\cup N_2)$ is still connected. I would like to do a "boundary connected sum of $N_1$ and $N_2$ in $M$"; that is, cat out small $(n-1)$-discs in $\partial N_i$ and attach $B^{n-1}\times B^1$ that connects $N_1$ and $N_2$ and get a smooth connected submanifold. While such a construction is described in, for example, Kosinski's Differential Manifolds for the case of abstract $N_1, N_2$, how can I do it if I want the resulting connected manifold to be a smooth submanifold of $M$?

If it helps, I can assume that I have a framing of the normal bundles of $N_i$ in $M$. 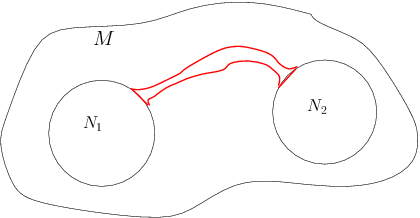 As pointed out in the comments, the resulting manifold will depend in general on the path chosen to connect $N_1$ to $N_2$.

In such coordinates the smoothing is easy: just do it for $n=2$ and then extend in a rotationally symmetric way.

As for the in/dependence on $\gamma$, note that if you are in codimension at least $3$ then any $\alpha$ and $\alpha'$ as above are isotopic (provided the $N_i$ are connected, otherwise will depend on the connected compoents where the $x_i$ belong). This is because there is enouch room in $\mathbb R^{m+3}$ for separating $R^m$ from a line, so one can resolve easily evetual crossings.

EDIT: The above sentence is not formally correct. To be more precise, once you chose an arc $\alpha$ then you can move the points $x_i$ where you want, but the dependence on the homotopy class of $\alpha$ in $M$ still is in play.

In the comments I see that the right codimension is at least $4$. So I may have been confusing with indices and notations, but this is easily checked.

Not the answer you're looking for? Browse other questions tagged differential-geometry differential-topology or ask your own question.

1
Reference for construction on Riemannian Manifolds

4
Different definitions of handle attachment
5
Transverse intersection of multiple submanifolds
1
Gluing submanifolds along their common boundary
12
Is there a condition for the closure of an open subset to be a manifold with boundary?
0
Can manifold subsets always be made into submanifolds?
3
Integral Manifolds of the Symplectic Foliation
8
Are two homeomorphic hypersurfaces of the same smooth manifold also diffeomorphic?
1
Are manifold subsets, now with subspace topology, that are immersed submanifolds (regular/embedded) submanifolds?