How to find camera position and rotation from a 4x4 matrix?

The values are as follows

How do I extract the camera position and rotation in world co-ordinates using this matrix?

On the left I have shown a cam and its viewing a 3d object, and I take a photo of this 3D object from the cam. THe right is what I want. I want to get the world postion/rotation of the cam and the world positon/rotation and actual size of the image in 3d space.

Assuming your matrix is an extrinsic parameter matrix of the kind described in the Wikipedia article, it is a mapping from world coordinates to camera coordinates. So, to find the position $C$ of the camera, we solve

The orientation of the camera is given simply by $R^T.$ So if the "in" axis is the z-axis, for instance, then the vector pointing in the direction the camera is pointing is

I am not familiar enough with this domain to know what the conventions are, but I can provide some general context.

A $4 \times 4$ homogeneous camera matrix transforms coordinates from world space to camera space. Apparently, this matrix does not include a perspective projection, so we're effectively talking about an affine transformation. The matrix itself can tell you where the camera is in world space and in what direction it's pointing, but it can't tell you anything else—you need other parameters of the camera for that.

Because we're just talking about a transformation here, we need conventions to tell us about the camera. The conventions that I'm used to are that in camera space, the camera is situated at the origin, and has axes that look like this: 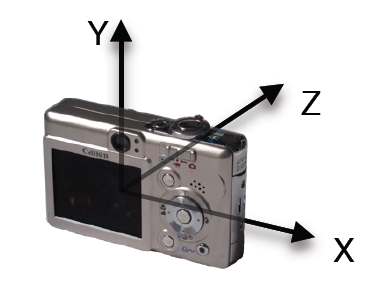 This tells you about as much as you can possibly get from the matrix. Everything else depends on the other properties of the camera.

Not the answer you're looking for? Browse other questions tagged matrices computer-vision or ask your own question.