How to create mazes on the hyperbolic plane?

I'm interested in building maze-like structures on the [5, 4] tiling of the hyperbolic plane, where by maze-like I mean something akin to a spanning tree of the underlying lattice: a subgraph of the lattice that's still connected (every cell can reach every other cell) but with a sort of 'distance multiplier' effect where from any given cell in the lattice, there are likely to be cells that are nearby in the original tiling with a long 'shortest path' through the subgraph to reach that point. (This is an admittedly imprecise notion, but I doubt there are explicit results on this sort of thing anyway). I could use any of the standard maze-generation algorithms, but they involve a 'prepass' that holds the entire lattice graph in memory and so aren't really practical for infinite (or functionally infinite) lattices; I'm looking for something that can generate walls (or equivalently, cut edges from the underlying graph) in a 'local' fashion without needing to look explicitly at the global structure.

If I were on the plane, then there are relatively straightforward ways of doing this: for instance, for each cell, place a wall randomly on either that cell's south or east edge. With probability 1 this will create a spanning tree of the plane - it's not a 'random' spanning tree (in particular, of course, it's impossible for any cell to have both its south and east sides 'walled', which I imagine happens with probability 0 for a random spanning tree of the plane) but it's a tree, even so. For instance, here are two $5\times 5$ grids of cells with their east or south sides randomly walled: 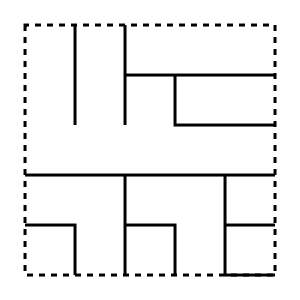 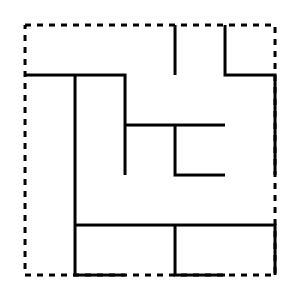 Similarly, if the generation process uses a 3-sided coin with equal probabilities of drawing a south wall, east wall or no wall, then the resulting grids aren't spanning trees (there can exist multiple disjoint paths between nodes), but they still clearly have the sort of distance multiplication I'm looking for: 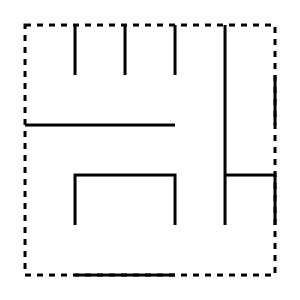 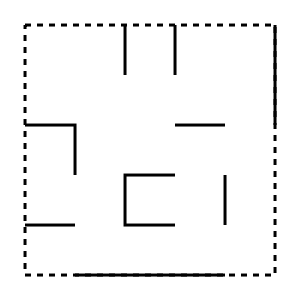 Unfortunately, these techniques don't work as well for the hyperbolic grid I'm interested in; getting a canonical notion of outward edges is a bit more challenging, and the 'maziness' of the result is much harder to control. Does anyone know of a scheme similar to the coin-flipping techniques with only local information generated/used that can be applied to arbitrary regular tilings?

Your method for the Euclidean square grid introduces an asymmetry between southeast and northwest that leads to two crucial features:

Here's an image of a maze on the $[5,4]$ tiling of the hyperbolic plane created in this manner, visualized using the Poincaré disk model. The straight segments, which lead neither away nor towards the centre, are all walled, except for the innermost ones. For the arced segments, each tile "owns" the ones that lead towards the centre from that tile, i.e., the ones for which the tile is in the interior of the circle of which the segment is an arc. For each tile, exactly one of the segments it owns is open, chosen randomly with uniform distribution, and the others are walled. 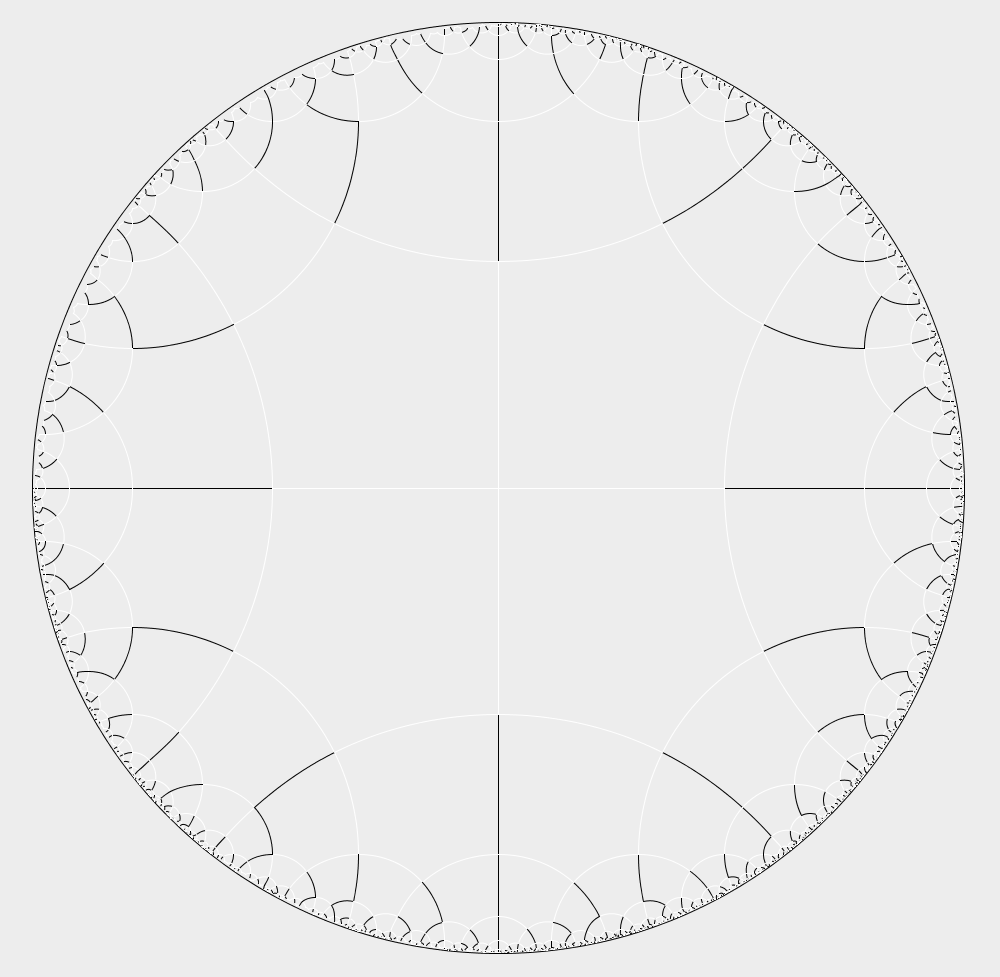 I'll create some more images later of how the maze looks if we place the centre of the disk on a different point (i.e. not the one used as a centre for the construction of the maze). Let me know if you'd like me to post the code I used to create this.

Mazes can be created in the hyperbolic plane very easily: you only need to ensure that the starting and goal points are both reachable from infinite regions, and connect the cells randomly with high enough probability, and it is guaranteed that the maze is solvable. I am not sure whether this is exactly what Steven Stadnicki wants, but it does generate interesting mazes. I am using this in HyperRogue -- the idea is the easiest to explain with the Princess Quest maze. 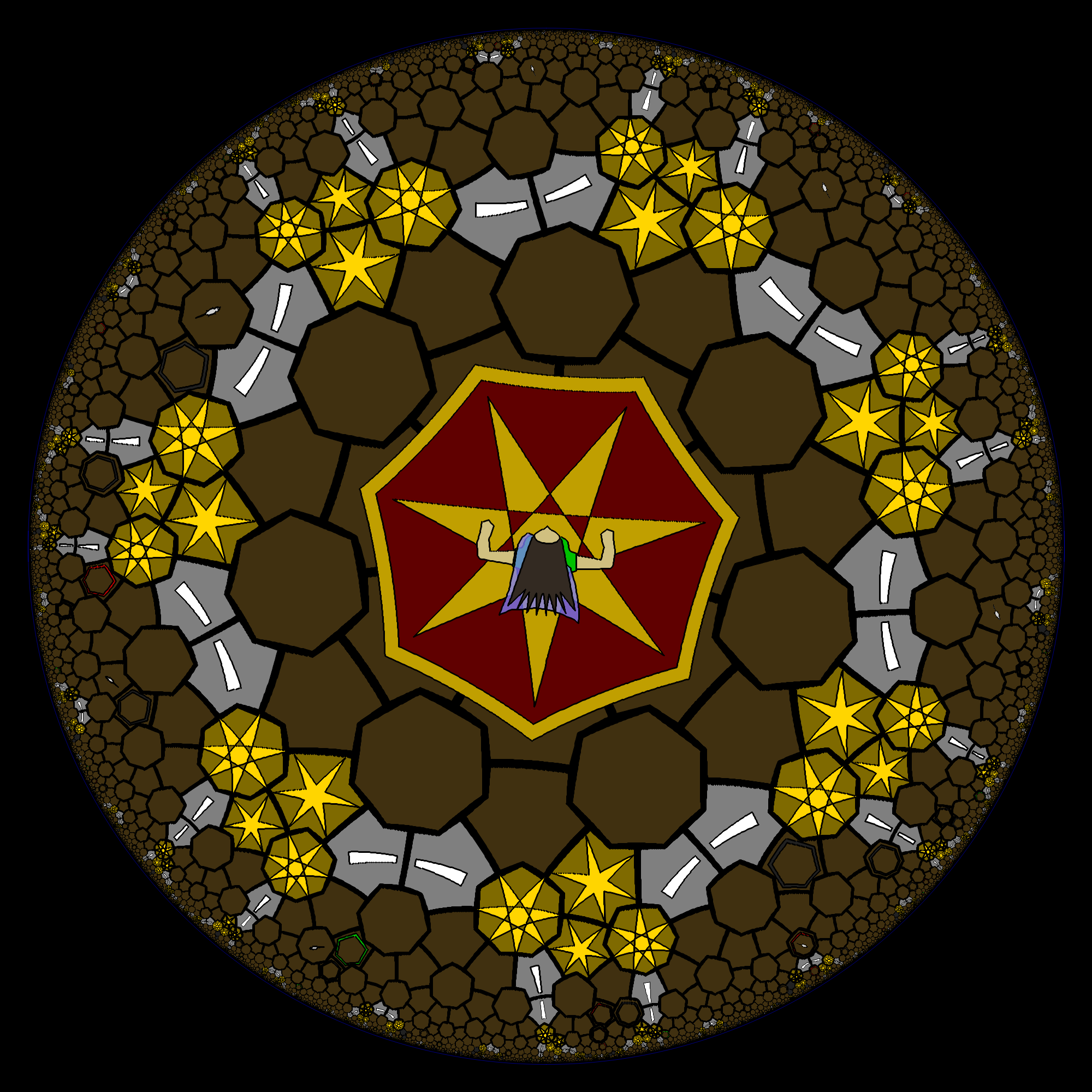 This is the periodic pattern used, consisting of heptagonal rooms (which have seven gates) and infinite tree-like corridors. Gates are randomly opened or closed; if they are closed, they can be opened by stepping on nearby green plates (which may not exist, or may exist on the other side). You typically start 100 steps away in the 12 o'clock direction, and your goal is to free the Princess by stepping on the green plate (at 7 o'clock on the picture).

It is guaranteed that it is possible to free the Princess: 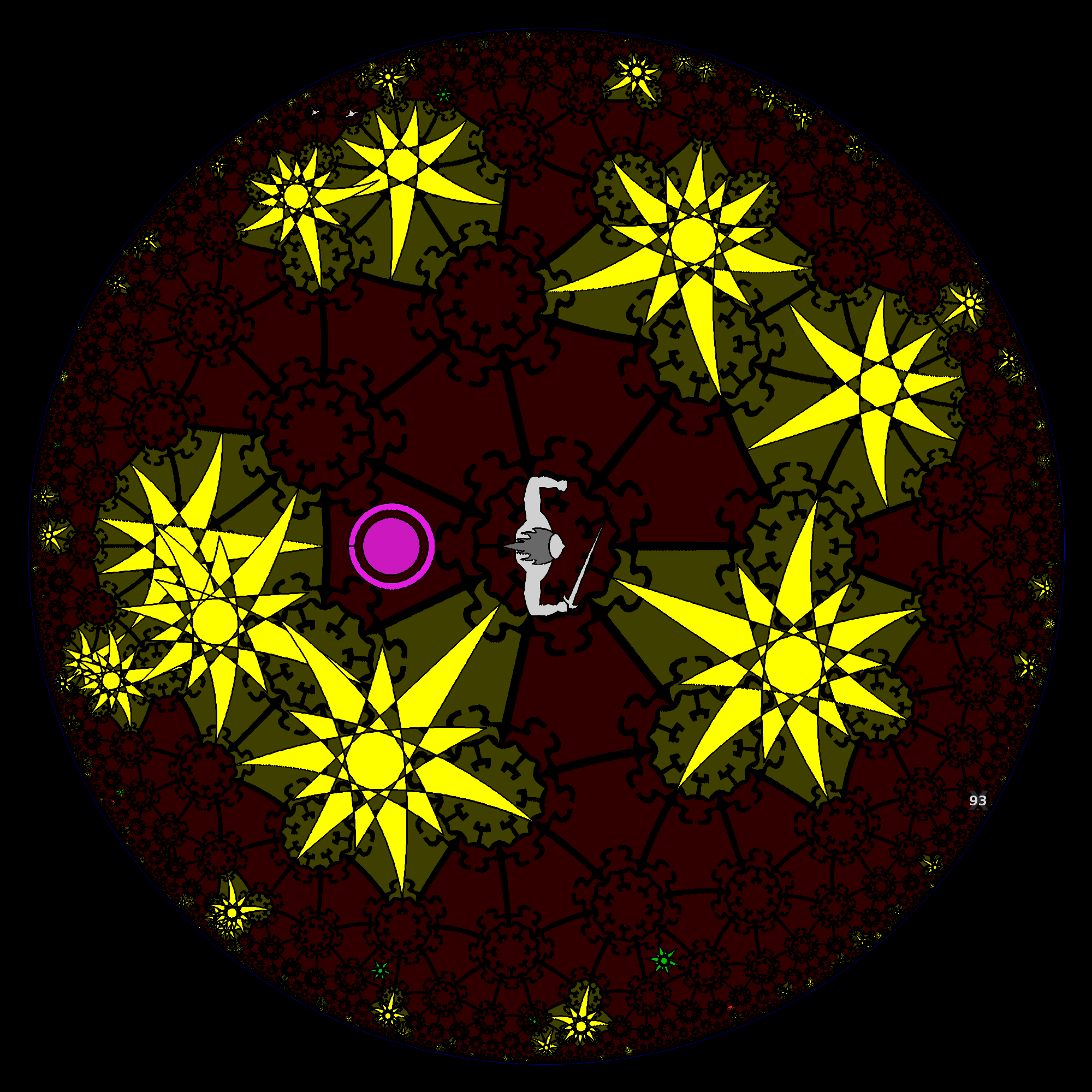 This is the Yendor Quest in Hell: you have to reach a cell 100 steps away, to find the key to unlock the purple Orb of Yendor. This construction of obstacles is very simple (just pick some tiles randomly as the centers of "big stars", and all the tiles adjacent to them are impassable), but a similar reasoning guarantees that it generates a solvable maze. (HyperRogue does not guarantee that the starting/key regions are infinite, because it is extremely unlikely anyway that they are finite, but it would be easy to guarantee this.)

Not the answer you're looking for? Browse other questions tagged graph-theory recreational-mathematics hyperbolic-geometry percolation or ask your own question.

12
Embedding the Infinite Binary Tree in Regular Tilings
21
how to generate tessellation cells using the Poincare disk model?
1
Triangular tiling of hyperbolic plane
4
Representation of cell location in hyperbolic plane
8
Wallpaper groups for the hyperbolic plane
2
Planarity of a “cell graph”
2
Is a good automatic presentation known for the 'right dodecahedral' honeycomb?