I'm working through a classic Calculus book (Morris Kline), and one of the problems is:

Prove that the foot of the perpendicular from the focus to any tangent of a parabola lies on the tangent to the vertex.

I managed to prove this by:

HOWEVER, this seems like a very brute-force approach. It's almost like I cheated or I simulated it on the computer with $1000$ points and determined that it is so. I don't really understand WHY these $2$ lines must meet in this manner.

Is there any sort of geometric or intuitive proof?

Notice that the bisector of the interval $FA'$ intersects $P$ at $A$ (by the definition, as the distance from $A$ to $A'$ is the distance from $A$ to $l$), and it doesn't intersect $P$ at any other point: if it did, we would have, between the two intersection points, another point which is closer to $A'$ (and therefore to $l$) than to $F$. We conclude that the bisector is, in fact, tangent to $P$ at $A$: the only lines which intersect the parabola at exactly one point are the tangents and the vertical lines, and clearly the bisector isn't vertical. How you would prove it depends on how you define the tangent, exactly, but I think the best way would be to show that for any line through $P$ with slope distinct from vertical and tangential, you can find a secant with that slope. 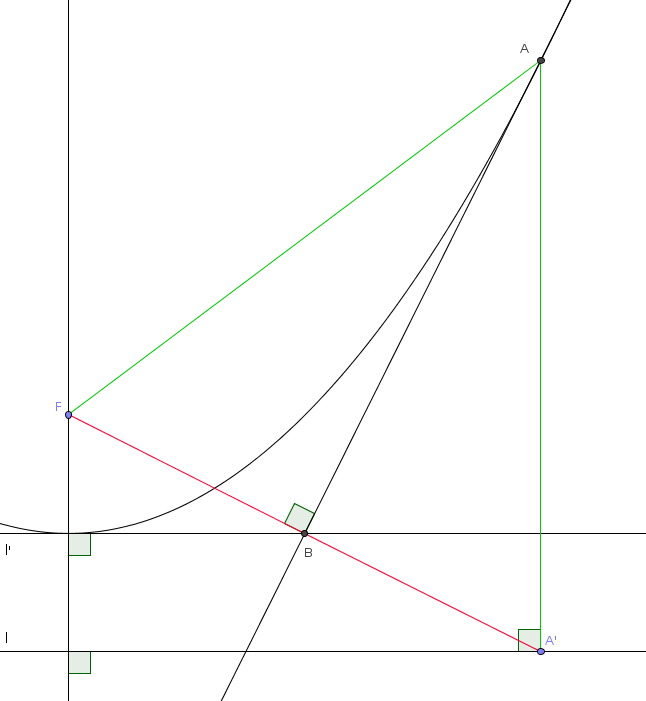