Computing probabilities of consecutive letters in a word grid

I'm sure most people are familiar with word grid games like Boggle and the newer digital versions Scramble with Friends and Ruzzle. 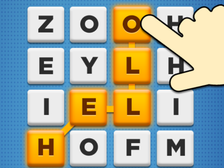 For anyone not familiar, the idea is to find words by using adjacent tiles. You start from any cell and try to spell a word by dragging up, down, left, right, or diagonal. The board doesn't wrap, and you can't reuse letters you've already selected.

I'm trying to figure out the likelihood of a word appearing on a board given the likelihood of knowing how often individual letters appear. For example, if I know that the letter A appears 9.8% of the time, what is the probability of seeing the word AA?

I know this is fairly simple, but it's been too long since college stats class. (I do have two hokey models, but I'd like to hear from the experts.) I could run a simulation of a million boards and come up with an empirical answer--in fact, someone has--but I'd rather understand why that is. In order to make things simpler, I'd like to ignore two rules that add to the complexity:

So with that being said, and with the following probabilities

What is the likelihood of a random board containing the word SEE? What about SET? TEAR? What about the rarer CREATES?

I have the probability that a 16 letter board contains at least one S and at least two E's given the frequency probabilities above is: .565135

I ran this code in Mathematica which I believe simulates 1000000 boards and returns the number of "good" boards.

The agreement is very good.

Not the answer you're looking for? Browse other questions tagged combinatorics puzzle or ask your own question.

2
Computing probabilities involving committees
0
how many words can be formed using all letters in the word EXAMINATION
6
Probability that a word contains at least 3 same consecutive letters?
8
Combination Problem: Arranging letters of word DAUGHTER
9
How many arrangements of the letters in the word CALIFORNIA have no consecutive letter the same?
0
In how many arrangements of the letters of the word PAPAYA are the three As consecutive?