What is the maximal area covered by two triangles in a unit circle? There are no restrictions other than that. They can overlap, touch the circle, not touch the circle etc.

So far I have shown

AD 2: The optimal non-overlapping solution is a square formed by two triangles meeting in a diameter of the circle. This can be derived from a few simple principles:

(a) Given a triangle with all vertices on the unit circle we can always increase the area by fixing two vertices using their distance as base and then move the third vertex to the middle of the circular segment between the other two to maximize the height with out changing the base. This makes optimal non-overlapping solutions consist of isosceles triangles.

(b) Any non-overlapping triangle contained within one half of the circle can be enlarged by a parallel displacement of one side until it either meets the diameter of the circle or a side of the other triangle. This effectively makes the two triangles share one side so they form a 4-gon.

(c) The optimal 4-gon with vertices on a circle is a square which can be obtained by applying principle (a) four times namely to each of the triangles formed by dividing the 4-gon by a diagonal.

So the optimal non-overlapping solution will be an inscribed square of area $2$.

AD 3: I wrote a "dirty" equation for the area as a function of the radian distance between a vertex from each triangle and found that the area was maximized when the six vertices where evenly spread out forming a hexagram (star of David).

I suspect the optimal solution is actually $2$ so that the triangles do not need to overlap. In other words, we gain nothing from allowing the triangles to overlap, if I am right. I hope someone can provide a nice and clear way to either prove or disprove this conjecture.

Here's an approach to a proof.

We know the six vertices lie on the circle. Now divide into three cases.

CASE 1: In case 1, consider a chord of the circle that separates the two triangles but doesn't meet either of them. This chord will be longer than at least one of the two nearby edges. Replacing that edge with the chord will increase the area, proving that the original configuration was not optimal.

Subcase 2: If the x-coordinates of $N_1$ and $N_2$ have opposite signs, we can increase the areas of both triangles by replacing N_1$ and $N_2$ by $N$, again showing this situation is not optimal.

Subcase 3: WLOG, suppose the $x$-coordinates $x_1$ and $x_2$ of $N_1$ and $N_2$ are both non-negative, with $N_2$ being strictly to the right of $N_1$. Then the perpendicular distance from $N_2$ to the edge $SE$ is less than the perpendicular distance from $N_1$ to $SE$. [Proof: some trig/geometry stuff I don't feel like working out :) ] Replacing $N_1$ with $N_2$ therefore would increase the area of the right-hand triangle, showing this situation is also not optimal.

Conclusion, so far: the optimal solution either involves two interior-disjoint triangles that share an edge, or two overlapping triangles. In the first of these cases, I'm pretty sure a gradient argument will show that if you fix the shared edge, the area is optimized by having each triangle be isoceles. You then compute the exact areas as a function of the location of the shared edge's second vertex (assume the first is at the south pole) and find it's optimal when the other vertex is at the north pole, and you're done.

What about the overlapping triangles case? In this case, the total area is a smooth function of the five vertex locations (I'm still fixing the sixth at the south pole). That means you can compute the derivative with respect to each of the six angles and show that the gradient's always nonzero. So following the flow of this gradient field must lead you to a point NOT in the "overlapping interiors" domain, i.e., one of the other cases. And the only one that can conceivably be the optimum is (by prior argument) the "two triangles erected on a chord that turns out to be a diameter" situation.

I haven't computed the gradients; I haven't done the geom/trig proof in the middle of one of the cases...but it least it's a sketch of how one might get to the end result.

I whipped up a quick Matlab program that computes area stochastically (generate 20000 points; count how many are inside either triangle), and then ran it on 10,000 randomly generated triangle pairs (i.e., 6 random points on the unit circle; the first 3 define one triangle; the next three define the other. WLOG, I made the first angle be 0). Each time a new "largest area" was found, I printed out the triangles. It instantly found an area of ~1.25; then steadily improved this to 1.87 over the next couple of minutes. A previous instance of the program reached 1.97 or so...and this one just jumped to ~1.92, with a solution that's very nearly the two 45-90-45 triangles erected on a diameter.

That suggests to me that the correct answer is indeed this pair of triangles, with area 2 as the optimum.

Here's a picture of the most recent success: 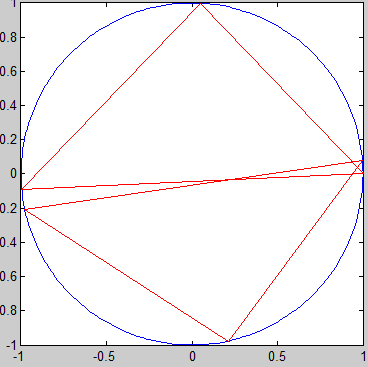 Not the answer you're looking for? Browse other questions tagged geometry optimization circles triangles or ask your own question.

1
Attaching equilateral triangles to a circle
2
The area not covered by six pointed star
1
Proof of a set of triangles and unit squares
0
Area of convex n-gon using triangles
4
Area of a square whose one part is in circle
3
What is the average area of all triangles that can be inscribed in a unit circle?
7
Covering the maximum area of a semi-circle with right-angle triangles
3
Expected area of circle defined by 3 random vertices in unit square?