The Kuratowski closure-complement problem asks what is the largest number of distinct sets obtainable by repeatedly applying the set operations of closure ($-$) and complement ($c$) to a given starting subset of a topological space. By using the identities

one can find that an upper bound of this number is given by 14. Furthermore, it is also possible to exhibit a subset of $\mathbb{R}$ which attains this bound.

This motivates the following question, which is a variant of Kuratowski closure-complement problem:

Does the number of distinct sets obtainable by repeatedly applying the set operations of dual cone and complement to a given starting convex cone in $\mathbb{R}^n$ has an upper bound?

So we distinguish two cases for your question. 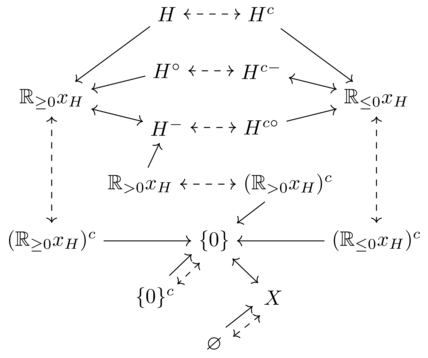 One can reach at most 14 nodes from any given starting point. A blunt ray is an example of a starting cone where all 14 nodes represent distinct sets.

So we have a considerably simpler diagram, with only 10 nodes: 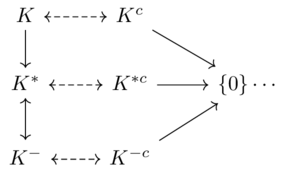 I'll briefly mention the situation for other dimensions:

Edit: My answer is irrelevant because the OP stated a fact incorrectly and edited the question. Also, assuming the set to begin with is convex and $\delta^2=a$, I cannot think of a relation between $\delta$ and $b$ so the monoid so generated isn't necessarily finite. Please un-accept my answer.

The answer is YES, the number of sets is finite.

In the case of the operations being dual cone and complement, the monoid $N$ is generated by $\delta, a, b$ with $\delta^2=a$ and other relations as before. (Here, $\delta$ is the operation of taking the dual cone.) Now there is an injection $M \hookrightarrow N$ of monoids and the index of $M$ in $N$ is 2.

Of course, one needs to construct an example (if possible) that the 28 sets are actually distinct, but surely there is an upper bound.

Not the answer you're looking for? Browse other questions tagged general-topology dual-cone or ask your own question.

25
Why does a convex set have the same interior points as its closure?