Yes, this initial value problem is made to do such things. At the request of Robert Lewis, here is a picture: red curve is the analytic solution, blue curve is the textbook implementation of RK4 with the parameters from your post. 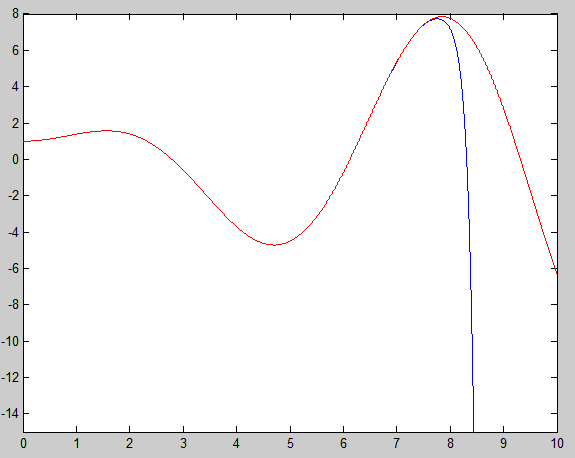 (The blue curve is pretty much vertical from there.) I don't think that this equation qualifies as stiff (the term I never really understood), it's just hypersensitive to initial condition. Indeed, the exact solution with initial condition $y(0)=1+\delta$ is $$y(t) = t\sin t + \cos t + \delta\, e^{t^2/2} \tag{1}$$ where the last term spells trouble. As soon as we step off the exact trajectory the tiniest bit, the $e^{t^2/2}$ term kicks in and dooms the solution, even if the subsequent computations have no error at all.

In a way, the trigonometric stuff here is mostly a decoration. The simpler equation $y'=ty$ already has the same feature. With initial value $0$ the solution is $y\equiv 0$. But with a nonzero initial value $C$ it's $y= C \exp (t^2/2)$, which is huge.

By the way, I tried stiff ODE solvers like ode15s in Matlab; that did not help at all. 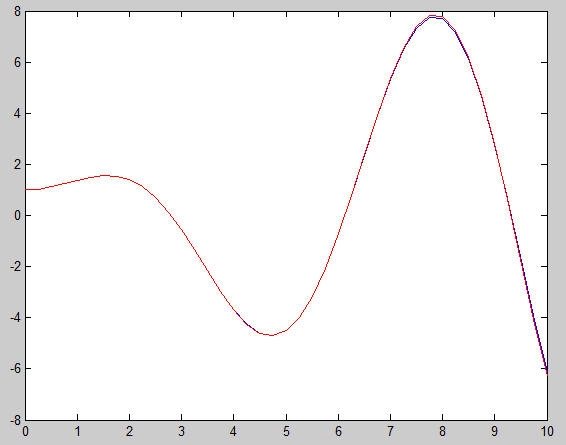 In a way, this is cheating: how did I know that $C=-6.1$ is the right value to use? (I took it from the endpoint value of the exact solution.)

I know this question is old, but I thought I would post some extra info around this.

One reason your numerical solution to the Ordinary Differential Equation (ODE) is exploding, kind of regardless of the numerical method used, is because of the ODE itself. If you go and study some theory on numerical integration of ODEs, you will find a common model problem used to study numerical methods is:

Where $\lambda$ can be a complex number. The general solution to this ODE is obviously

What you will find is that numerical methods basically always diverge from the real solution when $Re(\lambda) > 0$.

If you look back at your ODE, the $ty$ term is analogous to the $\lambda y$ term in the model ODE. One interesting thing to note is since $t$ is positive during the lifetime of this simulation, this means, analogously, your ODE has a $Re(\lambda) > 0$, meaning you should expect the solution to diverge and thus blow up basically no matter what numerical method you use.

Not the answer you're looking for? Browse other questions tagged ordinary-differential-equations numerical-methods or ask your own question.

0
Stiff differential equation
2
Implicit method for ODE
2
How to solve Lorenz equations numerically
1
How do I use Runge-Kutta Iterative method to produce a table of values for a function?
2
How to solve this differential equation numerically in Python?
2
How to know if the solution given by Runge Kutta is good?
0
Adams-Bashforth initial points influence in error
0
As step size $h$ decreases, which method is more efficient? Euler-midpoint method and the classical fourth-order Runge-Kutta method?
4
Why does this non-stiff ode requires a stiff solver?
1
Numerical solution to second order ODE with an infinity at r = 0 (Auxiliary Cauchy Equation)