Can the square root of a real number be negative? [duplicate]

Can the square root of a real number be negative?

Dealing with the questions of functions in eleventh class my maths teacher says that square root of a real number is always positive. How is it possible?

I worry sometimes about what gets taught by way mathematics in secondary school these days.

The point in all of this was to simply establish that taking the square root of a squared number, does not reverse its exponent, because it cannot be reversed definitively. As user86418 put it:

If a and b are real numbers, then the conditions $a^2=b$ and $a=\sqrt{b}$ are not logically equivalent; the second implies the first, but not conversely.

Therefor, for the purposes of convention, a square root has been defined to be the absolute value of the original number that was squared. This why, if you plug the functions $y^2 = x$ and $y = \sqrt{x}$ into a graphing calculator or Wolfram Alpha, you will find that you get two very different looking graphs. Notice how the the graph of $y=\sqrt{x}$ never goes below the $x$-axis. Had a square root been defined as always negative, the graph of $y=\sqrt{x}$ would simply be flipped about the $x$-axis. 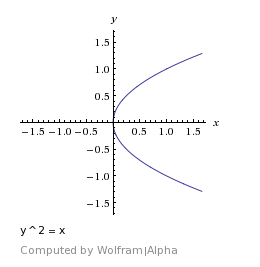 The definite article and the singular in "the square root" is also important to imply the conventional definition of $\sqrt{}$. But more correctly he should say "the principal square root", because mathematically the expression "the square root" doesn't make sense, since there are two different roots in general.

THE square root is defined to be the positive root. In reality there are always 2 roots, one positive and one negative. Think about the sqrt of 4, what this is asking is "what two numbers that are the same multiply to 4?" The answer would be 2 or -2 because 2x2=4 and (-2)x(-2)=4.

Recall the vertical-line test: if you graph an equation and if there is a vertical line that intersects the graph at more than one point, the equation does not correspond to a function.

The vertical-line test is, although not particularly rigorous nor very extensible, a good demonstration of how to show that a function is well-defined. Although yes, the square of any positive real is equal to the square of the corresponding negative, the square root function cannot be well-defined if it generates both a positive and negative value.

As such, $f(x)=\sqrt{x}$ is defined to be the positive root so that it is a function. When it is desired that both the positive and negative roots are referred to, one has the option of using either $\pm\sqrt{x}$ or $\surd x$.

Not the answer you're looking for? Browse other questions tagged algebra-precalculus radicals or ask your own question.

38
Square roots -- positive and negative
0
when you see the math expression 4^(1/2) , how do you know if it means to give just the positive answer, or both positive and negative answers
0
Square root of whole number number of solutions
56
Is $\sqrt{64}$ considered $8$? or is it $8,-8$?
1
What would happen if $\sqrt{}$ instead meant the negative square root?
1
Is it wrong to say that $100$ is solution of $\sqrt x+10=0$?
2
Expanding Square Roots, Why No Negative?
0
A simple question about nonnegativity of square roots
0
Why is $\mathbb{C}$ called algebraically closed?
0
Why does a root only have a positive output?
See more linked questions