zeros of a polynomial

I have already seen that $P(z)$ has six different roots, and that none of them are real or of the form $ki$, $k\in \Bbb R$. Since the coefficients of $P(z)$ are real, then it's roots are 3 conjugate pairs, and therefore the possibilities are limited to two.

Defining $f(z)=z^6$, $g(z)=z^6+6z+10$ and applying Rouche in
$|z|<2$, $|f(z)-g(z)|<|f(z)|$
I get that all roots are contained in the disc, but how do I go about splitting them into the four quadrants? From what I know about this polynomial, finding zeros in one quadrant is enough to determine the rest, but I'm stuck trying to apply rouche to a quarter circle (basically I'm having trouble finding a suitable f and g)

Rather than using Rouché's theorem we can approach this as a perturbation problem. To wit, consider the polynomial 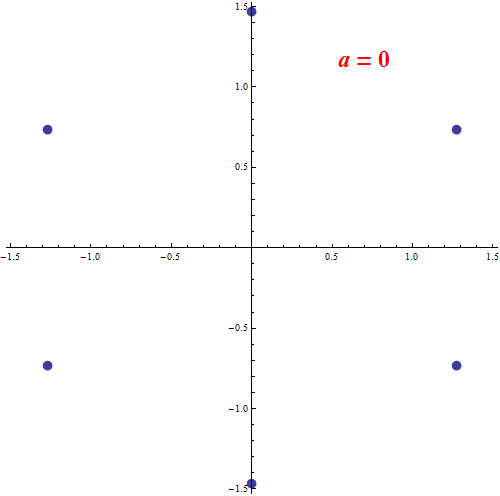 By the inverse function theorem these zeros are analytic functions of $a$ for $a$ small enough. If $z = z(a)$ is one of these zeros then

and, differentiating with respect to $a$, 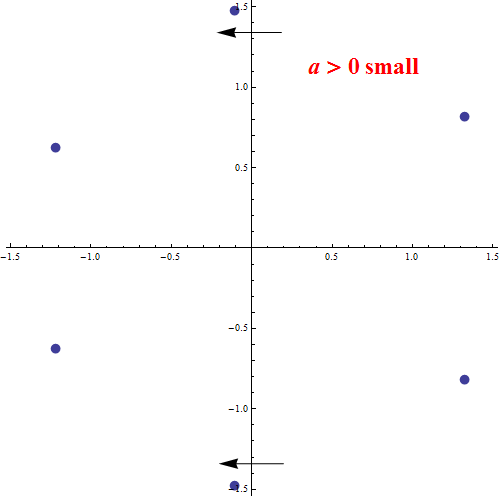 Each of the zeros starting in the four quadrants when $a = 0$ must remain in their quadrant for all $0 \leq a < 6 \cdot 2^{5/6}$, and once the zeros on the imaginary axis fall into the quadrants in the left half-plane they must remain there as well.

Not the answer you're looking for? Browse other questions tagged complex-analysis roots or ask your own question.

2
Find how many solutions of the equation $z^6+6z+10=0$ are in each quadrant.
5
Determining the Number of Zeros of a (Holomorphic) Polynomial $f:\mathbb{C}\to\mathbb{C} $ in each Quadrant.

7
Zeros of a complex polynomial
3
An application of Rouché for $z^4 - z + 5$
0
complex root finding
6
Factoring real polynomials with no real zeros, and other polys whose zeros come in pairs
3
Number of roots of $z^4+z^3+4z^2+2z+3=0$ in each quadrants
1
Finding the real roots and complex roots to a polynomial
4
Application of Rouché's Theorem. Show polynomial has exactly one root in each quadrant.
1
Distribution of zeros of partial Taylor series of $e^{z^2}$