I want to reparametrize $\gamma $ in terms of arc length $s$. Basically, I want a vector which gives the time $t$ as a function of $s$. I also need this to be a numerical solution, since in general my curves are quite arbitrary (experimental data), not neat little limacons like I am playing with here. So it will probably be necessary to interpolate between values of the vector s.

I've worked on this a little more, so I guess I'll take a stab at my own question. Here is our limacon again. 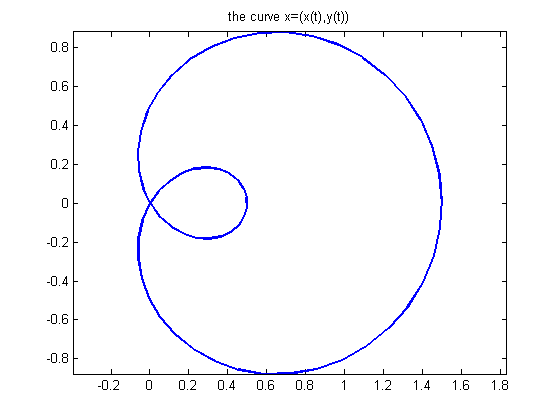 Notice what we begin with: a time parameter $t$ which runs in equal steps over the interval $[t_0,T]$, the cumulative distance $s$ traveled along the arc length at time $t$, and the Cartesian coordinates of the limacon $\gamma $ at time $t$. We set this much up in the question. What we want instead is an arc length parameter $s$ which runs in equal steps over the interval $[0,L]$, where $L$ is total arc length, together with the time $t(s)$ at $s$ and the Cartesian coordinates $\gamma (t(s))$.

We will be using the Matlab function interp1 in order to interpolate the timepoints $t(s_i)$ and coordinates $\gamma (t(s_i))$ which correspond to equally spaced steps $s_i$ along the arc length. Accordingly, we declare the arguments to interp1 with the variable names given in its documentation. The vector X is the original $s_i$, i.e. the distance traveled along the arc length at time $t_i$. The matrix V has column vectors whose rows are $t_i$ (our original time parameter in equal step size), and the coordinates $\gamma (t_i)$.

We need to interpolate to find the time points $t(s_i)$ corresponding to equally spaced arc length steps along the curve. These equally spaced steps run from $s_0=0$ to $s_N=L$, where $L$ is the total arc length.

We can verify that s(N) == sum(diff(Xq)), as should be the case. We use the multidimensional piece-wise linear interpolation capability of Matlab's interpolation function interp1 to find interpolated values for time $t(s_i)$ and coordinates $\gamma (t(s_i))$ which correspond to the equally spaced steps of $s_i$ given in Xq.

A call to diff(Xq) shows that we are moving in steps of constant arc length along $\gamma $, while a call to diff(Vq) shows that the time steps are no longer equal (first column). Thus, the result of our interpolation is:

So the arc length parametrization of the limacon $\gamma (t(s))$ is expressed in Cartesian coordinates as xs and ys. 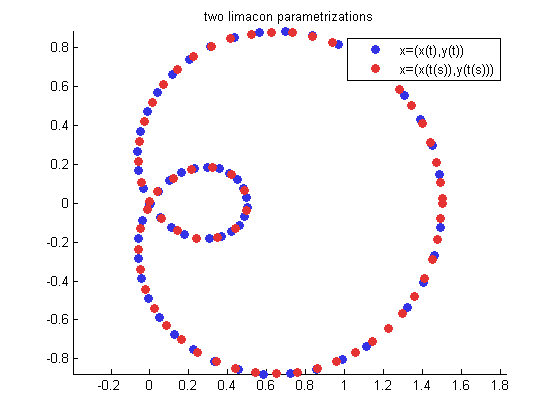 I'll have to do some more work if I want to allow periodic solutions, since the current Matlab script does not in general. To see this, just look at the distance between the last and first sample of $\gamma (t(s))$ in red above. If we were to advance one more step of 0.1058 units along the limacon we would not land on a point we already visited, even though we know limacons are $2\pi$-periodic. I think this basically amounts to choosing a different step size for $s$ than 0.1058.

Not the answer you're looking for? Browse other questions tagged differential-geometry matlab plane-curves or ask your own question.

1
Finding arc length and binormal vector for a given curve
2
Arc length function of a helix/spiral is convex?
0
Parametrize curve by arc length
1
Which plane curve parametrized by arc-length has curvature $\kappa(s) = \frac{1}{s}$
1
Total curvature of a parametrized-by-arc-length curve