What is a false premise?

I don't understand what a sound argument is. And what does it mean for a premise to be false? Why does case 3 (A is false, B is true) not apply in the real world?

Here the author says that the first premise is false. But how can $A \lor B$ be false in case 3 when $B$ is true? 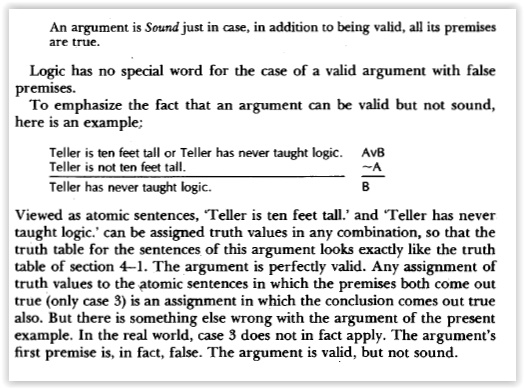 Note the very first sentence in the last paragraph: "Viewed as atomic sentences". With this, you're supposed to strip the sentences of their meaning and look at them just as literals (i.e. propositional letters or negations of these).

Thus you can attribute truth values to the propositional letters, (see valuations).

Then the author talks about case 3 which I'm guessing is the valuation $(A,B)\mapsto (F,T)$.
This valuation makes both the premises true and the conclusion true also.

Now the author says that in the real world case 3 can't happen, this means that if you now stop looking at the sentences as propositional letters and give them meaning again, then something impossible happens, namely that Teller has never taught logic (this is somehow known to be false, maybe Teller is the author).

The term false is being used with two different meanings, one of them is the natural language interpretation, the other one is as a valuation.

The following proof is a valid argument, however, the conclusion of the theorem is clearly false. What went wrong?

Some funny examples of this kind happen with loaded questions. For example, if you were to answer the well-known loaded question presented below by "Yes, I have" or "No, I haven't",

Have you stopped beating your wife?

then you would admit that, at some point, you were doing it (and that you actually have a wife). To respond to such a question, one usually points out (in whatever way) that it is based on false premises.

A sound argument is one which is both valid and its premises are true. The above is not sound, because the premise $0 = 1$ is not true. Still, the difference is rather subtle. For example, if the conclusion of the theorem was the whole implication $$(0=1) \implies \forall k\in\mathbb{N}.\ k=0$$ then the only premises are the axioms of logic, natural numbers, etc., and such a theorem would be both valid and sound.

Using the rules of natural deduction or a truth table, you can prove that $$[A\lor B]\land \neg A \implies B$$

As such, it is a valid argument.

It would be a sound argument if and only if both premises $[A\lor B]$ and $\neg A$ are true.

It would be unsound if and only if either premise is false.

I recently answered this question about valid and invalid arguments, see if it helps.

An argument is sound if it is valid and has true premises. In this case the conclusion is guaranteed true. I don't think your author's example is very good. See if this one helps.

Anyone born outside the USA cannot legally be president.

Barack Obama was born outside the USA.

I hope you agree that the logic here is perfectly correct: if the first two statements are true, then the conclusion has to be true. The problem is that (according to most people) the first two statements are not both true - specifically, the second is false - and therefore the conclusion is not guaranteed to be true. This is an example of an argument which is valid but not sound.

A sound argument comes as one where the premises are true, and the conclusion is true. For example:

makes for a sound argument as does:

One reason the notion of a valid argument becomes important, because we might end up studying or working with some system where we don't know whether the premises hold true, or if they hold false (but we can tell that one of the two must hold... or we know what the possibilities are). For instance, suppose that we know we have some particular binary operation % given to us. We're given the following argument

As perhaps a better example to illustrate why validity can be important, one can argue:

If a set of axioms A is independent, then there does not exist a model of the axioms which has some property P.

There does exist a model of the axioms which has some property P.

Therefore, the set of axiom A is not independent.

This argument holds as valid. But we can't tell a priori whether or not for a given set of axioms there exists a model of the axioms which has some property P. But, the argument holds as valid nonetheless and thus enables a sound argument, in a particular case, if we can find some instance where the premises hold true.

Not the answer you're looking for? Browse other questions tagged logic propositional-calculus or ask your own question.

1
How is the first premise true if variable $B$ is true?
1
True or False: The negation of $\sim p \Rightarrow q$ is $p \Rightarrow q$
1
Need a second view on interpreting if an argument is invalid
1
Validity and “true in every interpretation”?
1
Showing validity of an argument when premises contradict each other (natural deduction)
2
How Implication or Material/Concrete Conditional works when the antecedent is false and the consequent is true
1
The contradiction sign in logic
0
Show the following propositions through natural deduction and the Law of Excluded Middle