How to think of zeros of the derivative of a holomorphic funcion?

Felix Klein published a small book in 1893, called On Riemann's Theory of Algebraic Functions and Their Integrals (available for free at the the linked URL). This book contains a wonderful geometrico-physical interpretation of the zeroes and poles of meromorphic functions.

Klein interprets the level curves of the real part of a meromorphic function as the stream-lines of an electric field, and interprets the level curves of the imaginary part (which are orthogonal to those of the real part, by Cauchy-Riemann) as the lines of constant potential. The zeroes are then interpreted as sources, or point charges; the poles are interpreted as sinks (or maybe the other way around - it's been a while since I read the book. Anyways, it doesn't matter too much). The residues reflect the strength of the corresponding source or sink. Many theorems of complex function theory then take on a very beautiful and concrete meaning. For instance, the fact that the residues of a meromorphic function on a compact Riemann surface sum to $0$ becomes a manifestation of the principle of conservation of charge, or an analogue of the preservation of currents, Kirchoff's circuit law.

The book, although over a century old, has aged very well, and it's worth taking a look at if only for its beautiful illustrations: 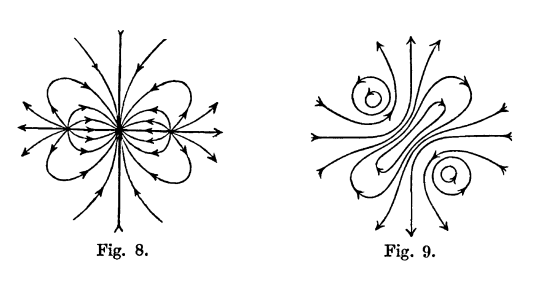 Not the answer you're looking for? Browse other questions tagged real-analysis complex-analysis analysis soft-question or ask your own question.