Suppose $D\subseteq\mathbb R^2$ is an open disc (or generally a simply connected domain with a good boundary), and $f\colon D\to D$ is a bijection such that the images of collinear points are themselves collinear. Is it true that $f$ could always be extended into a homograph $\tilde f\colon\mathbb R\mathbb P^2\to\mathbb R\mathbb P^2$?

I need to know whether a general proposition is true, i.e., one can extend a local collineation to a global collineation, therefore a homograph in the real projective plane.

I'd say the proposition holds.

Start by choosing a convex quadrilateral $ABCD$ and use its corners to define $E=AB\wedge CD$, $F=AD\wedge BC$ and $G=AC\wedge BD$. Choose the first four points in such a way that all these points lie within your region $R$ (which I rename since I used $D$ for a point). Now suppose you have a collineation which fixes $A, B, C, D$. Then it will fix $E, F, G$ as well, and you can do iterative bisections to prove that it fixes any point in the quadrilateral $ABCD$ is fixed as well: 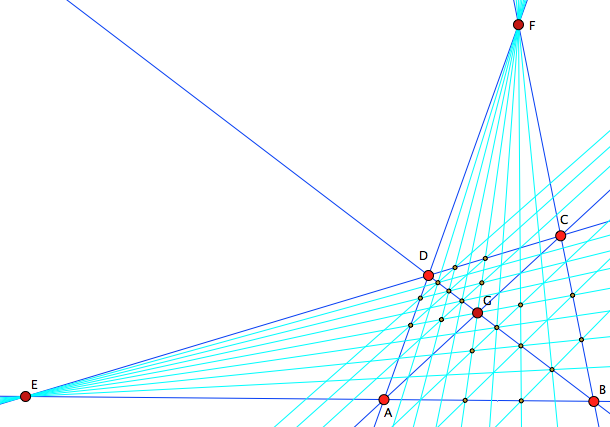 You might need an infinite number of bisections to hit some “irrational” points, but you can show that collineations will preserve order and therefore must also fix any points which arise as the limit of infinite sequences.

Now suppose you had a collineation which mapped $R$ onto itself and $A,B,C,D$ onto some other points $A',B',C',D'$. Then there exists a unique homography which maps $A',B',C',D'$ to $A,B,C,D$. If you can show that this combined map is the identity, than you have proven that the first collineation has to be a homography as well, namely the inverse of the second.

To show this, consider the case of $R$ being convex. Then you can describe evry point as the intersection of two distinct lines which both intersect the interior of $ABCD$. Since the points in $ABCD$ remain fixed, the lines remain fixed as well, and so does their intersection. So if $R$ is convex, then every point has to remain fixed under the combined transformation.

If $R$ is not convex, then you might have to describe far-away points as the intersection between lines which in turn are defined by other points and so on, until you end up with a set of defining points in $ABCD$. I guess one might have to work out the details here, to see what condition exactly a “good” boundary has to satisfy, but I'm pretty sure that any topological disk should do.

Not the answer you're looking for? Browse other questions tagged geometry projective-geometry or ask your own question.

1
classifications of isometries of $\mathbb{H}^2$
11
Book suggestions on projective geometry
3
Showing that the moduli stack of triangles is equivalent to the quotient stack $[\tilde{T}/S_3]$
3
Isometries of the hyperbolic plane in the Beltrami–Klein disk model
0
Prove that hyperbolic isometry with constant distance is the identity
0
$\Gamma\subset \text{Isom}(\mathbb{H}^n)$ fixing a finite set of points: hyperbolic and elliptic elements